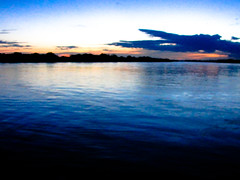 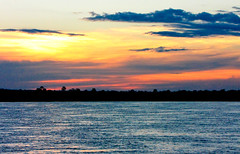 The skies over Livingstone are illuminated 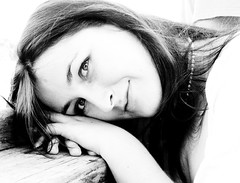 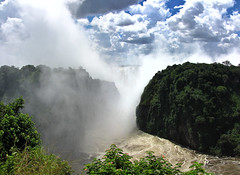 The smoke... that THUNDERS! 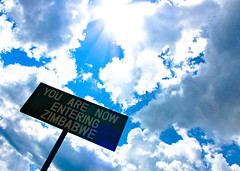 You are now entering Zimbabwe 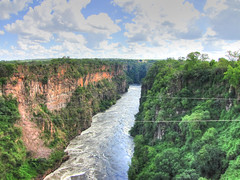 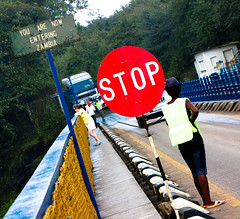 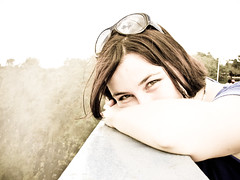 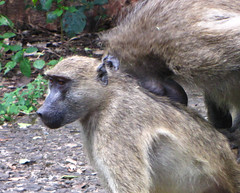 The face of a female monkey getting it 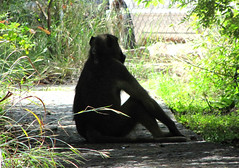 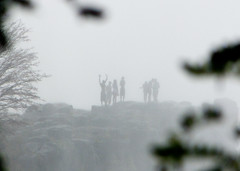 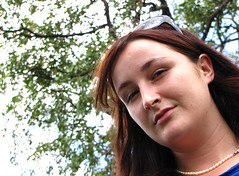 The look that says... 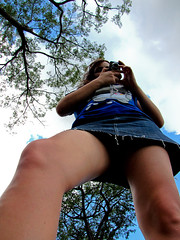 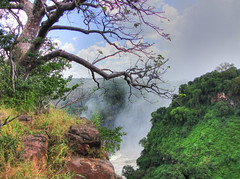 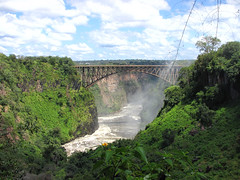 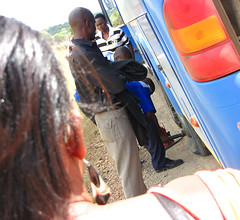 Working on a flat 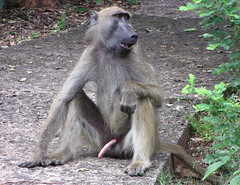 My first weekend back in Lusaka, Niamh and I went and paid a visit to Victoria Falls, or rather, Livingstone. While the girls in the house all joined a big group of local rugby fanatics on a long, long journey to Malawi, we took a 5.5 hour bus ride to the country's number one tourist attraction, which still meant getting up at 5am on Friday to catch the bus leaving at 6 or so.
The most often used service between Lusaka and Livingstone is operated by Mazhandu. You get a drink and a snack on board and the busses are in reasonable shape. However, each row still seats a tight 5 people. Both going out and coming back in, I was lucky enough to sleep most of the way, making the journey go by in a jiffy.
Well, not counting the flat tyre.

This being easter, the Falls were rather busy. And this being just after the end of the raining season, they were also rather wet, giving us showers a plenty.
And this being Africa, the entrance fee was doubled from March 1 onwards, putting it at 20 USD per person. In fact, it seemed like all excursions had their prices increased, again, to even less reasonable levels. This, in part, because the Zambian government has increased the fees for tour operators in the Mosi-oa-Tunya national park, I suppose because it's an easy cow to milk.

That's not to say that the Zambian government thinks ahead. Victoria Falls is about to lose its world heritage status because the governments of Zambia and Zimbabwe have failed to write up an extensive report on the status of the falls and its future. This might sound a bit harsh. That is, if you're not aware that the report is now more than 8 years overdue.

We slept at Fawlty Towers, the other backpacker's besides Jollyboys and significantly more attractive, with a spacious outdoor lounging area.
And on another upside, on the other side of the road from our guesthouse, the Ocean Basket has recently sprouted offspring in the form of an enveloping outdoor mall, Mosi-oa-Tunya square. With a pleasant Shoprite and several good restaurants, a very welcoming addition to the city.

On our last evening, we enjoyed the beauty of a booze cruise on the Zambezi, though without the onslaught of hippos.

With a longtime Dar hasher leaving for the UK, an intimate get together was scheduled for my last Sunday before heading out to Zambia, where a few of us enjoyed the spoils of a private house on the beach, some 40 kilometers south of the ferry crossing in Dar. Except for the heavy rains, things were quite enjoyable.
Until we left, where it took us over an hour to get out of the dirt road leading up to the house, getting stuck on multiple occasions, to get through the muddy path to the main road. First using the wench when stuck, then getting help from a bunch of Pakistanis, fresh from a weekend trip on the beach. Very helpful, and even essential in getting us back on dry land, the Pakis seemed chockablock with Kilis and perhaps even drugs, 'AJ' having eyes redder than excited genitals.

Thomas Friedman, in his book The Lexus and the olive tree claimed that no two countries have ever gone to war which both have McDonalds restaurants. At the time that was true. Now, sadly, it no longer is.

Listverse.com reports that Georgia has at least one McDonalds (and was in conflict with Russia), both Israel and Lebanon do and, apparently, so did Serbia when it was bombed by NATO (though, arguably, NATO is not a country).