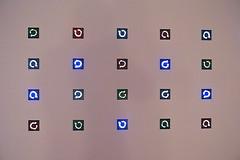 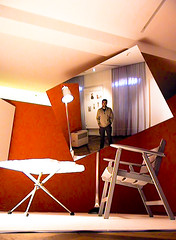 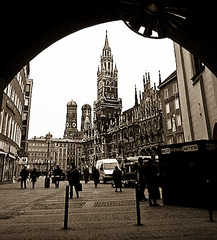 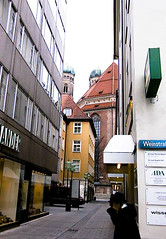 Stairs around the corner 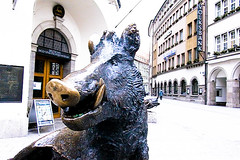 I had promised to visit family of mine in Saarbruecken and Hamburg before going home. So the day after my arrival in Ravenna, I bought a train ticket onwards to Muenchen, where I would stay a day, before heading out to Saarbruecken. Buying the ticket to Muenchen took more then 15 minutes so when I finally walked away from the counter, an angry mob had formed behind me. I felt that the slightest squeak would set them off and beat me to death for them having missed their trains. I tip toed away.
On the train, I was sharing the compartment with an Albanian (the country, not the color). We had a grand total of six passport checks before entering Germany.
Later, on the train from Muenchen to Saarbruecken, talking to a German kid, I was singled out once more and taken aside by the German police. Both our bags were thoroughly searched and the both of us were questioned on our purpose for being on the train. Luckily, we weren't strip-searched. Something the guy had experienced before.

Muenchen is a bit like an open air museum. Although a large part of the city was bombed during world war two, a lot has been carefully reconstructed and is in very good shape. It's easy to notice the difference between more northern cities in Germany and I wasn't surprised Muenchen is considered to be the fashion capital of the country. Everyone seemed to walk in Gucci, Armani and whatever else is fashionable today.
The one building that could use some paint is the Frauenkirche, a typical example of what is called Bavarian architecture. It's two towers are topped by round union-like domes that resemble orthodox churches if anything. Every ten meters or so, signs plastered on the side of the church were warning for falling bricks.

Not just the architecture, the prices too were quite different from what I'd experienced in Italy. In Muenchen, I had to pay 25 euros for a bed in a hostel and 4 euros for a beer in a regular bar.
At night, I ended up with Freek, a Dutch guy trying to get a post graduate assignment at the university of Muenchen in the field of AI, and with Bob, an American who had paid $500 to travel for five days in six countries by train, in a sports bar where the owner had pictures on the walls of him together with people like Mike Tyson, Franz Beckenbauer and Muhammad Ali.

The next day, shortly before my departure, I had just enough time to watch hordes of Japanese tourist look at the glockenspiel on the town hall on Marienplatz.