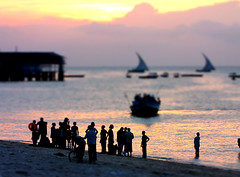 There’s no shortage of bakeries in Dar. A good thing. And not surprising in itself, as there’s money in making good bread. A pity that, so far, none of the bakeries I’ve tried actually makes any really good bread.
The bread here, though much of it looks good, goes stale quickly and starts to live a life of its own almost as fast.

Exceptions are fried breads or bread products and Indian snacks. The samosas, which most bakeries here sell too, for one, are almost always excellent, as are the chapatis.
Quite near my house, there’s a franchise bakery called Fairy Delights. Most mornings they have omelets wrapped in chapatis which, on most occasions, are rather yummy.
They also have at least two restaurants where lunch and dinner consists of extensive buffets for a mere 8000 shilling, about 4 euros. On offer are up to 30, not kidding, salads, fried breads, pizza, battered fish and shrimp, multiple Indian curries, several pilaus, a dozen or so deserts, fruits and more. A good deal if ever I saw one.

Today, I cycled along Old Bagamoyo road, the old road going north, and passed three bakeries virtually next to each other. At the first, I had an oversized chocolate cookie that, I suppose, was fairly decent, but way too crumbly for my taste.

One of the blogs I occasionally read is Lenin’s Tomb, which recently talked about a poll, conducted in the US, which asked participants to define themselves as to which class they belonged to. No less than 45% defined themselves as middle class.

Related to this, the poll asked how the polltakers defined middle class and the results purely and only related to the financial abilities of the constituents, ‘middle class’ considered meaning things like being able to own your own home, to save for the future or to buy a new car.
This made me think about a good definition for middle class, and some contemplation made me come up with the idea that ‘middle class’, defined in monetary terms, could mean the ability of the individual members of that class to obtain sizable loans at leading market rates. This, because it implies the existence of collateral, which implies the existence of sufficient capital.
Of course, this only defines the dividing line between lower (working?) class and middle class, and would still require a demarcation between middle and upper classes.

This, in turn, made me wonder what the conventional definition of ‘middle class’ is. Interestingly, there is none, the best one probably being the loosely defined the broad group of people in contemporary society who fall socioeconomically between the working class and upper class. Pah!

Tilt and shift and focus

I’ve started playing around with a cute little app which painlessly allows you to make tilt shift focus pictures. Dollhouse, here I come.

The little app is called TiltShiftFocus.

A few weeks ago, Blogger announced the cancellation of their FTP service for their blogs. Very annoying, as most of the blogs I set up through Blogger were served from non-Blogger domains. This, because of the flexibility it allowed me.

Some I ended up converting to hosted Blogger, some others, including Ismail’s website I converted to WordPress. Now that that’s done with, I discovered another platform, Singe SiteBuilder. Their website interface looks a bit clunky and for some odd reason is totally built in Flash, and it seems so are the websites you build with their service, but the resulting websites actually look pretty good, and they claim to have integrated quite a few handy tools and features, including integration with Google tools, SEO tools, social media and more.

I personally wouldn’t choose to run a Flash based website. For one, I don’t speak Flash, but being a Mac fan, and neither iPod or iPad supporting flash, I wouldn’t want to exclude a sizable portion of the market by design. However, they claim their website design package, for which apparently no coding experience is required, is particularly well suited to photoblogs. And, true, some do look quite nice.

Also, they have a free plan, but their paid plans are actually quite cheap, their most expensive plan coming in at 200 euros per year, allowing you to host unlimited domains with them, though maxing out at 60GB monthly bandwidth.