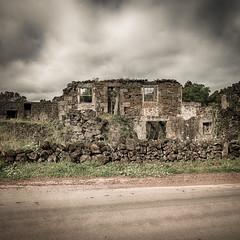 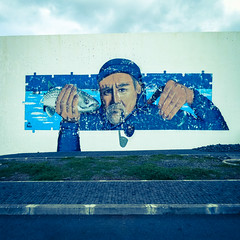 It puts the fishy in the glass 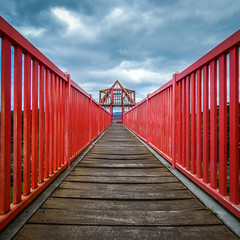 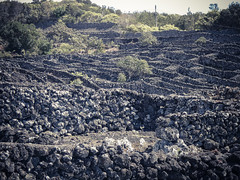 The wines of Pico 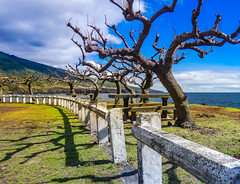 A moment of quiet 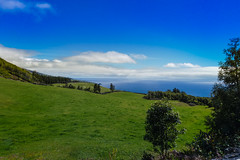 The green hills of Pico 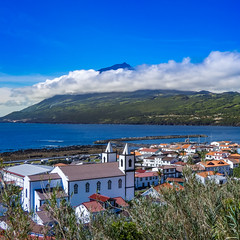 Pico on the clouds 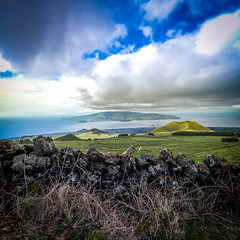 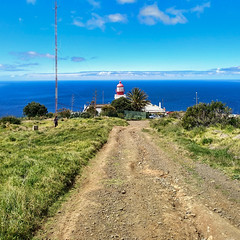 Down to the lighthouse 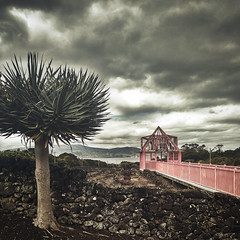 The detail is in the devil 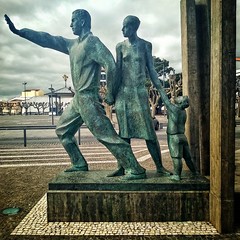 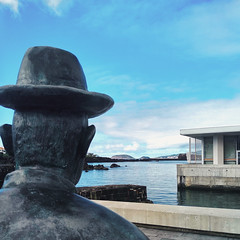 The Azores have their own airline and one rather stellar deal: If you fly in on one of their planes, they give you a free flight to any other island in the archipelago. This, so that you can easily connect to your outgoing flight, in case it’s on a different airline from a different airport.
Taking advantage of this, my already cheap flight became an even cheaper three flights. Flying in to Ponta Delgada, my connecting flight was going to take me to Angra do Heroismo, but with an 8 hour layover on the island of Pico, a World Heritage Site for its viticulture, its wine making tradition.

Pico’s wine-making heritage is unique as no soil is used in cultivating the vines on the rocky island, where much of the stone is actually volcanic, due to the central mountain on the island, a dormant volcano, and also the highest point in Portugal.
Not too dormant, though, as since the Portuguese arrived, from several side-vents, at several occasions over the last few hundred years, did lava flow out into the sea. Somewhat strangely, the islanders called these events ‘mysteries’.

When the Portuguese discovered the Azores in the early 1400s, no one lived here and it’s assumed the islands had never been inhabited. But, when I later visited Angra do Heroismo, on one of the other islands and a World Heritage Site itself, I came across an exhibition where the curator made extraordinary claims about the island’s megalithic past, connecting the island to the highly controversial Bosnian pyramids, Machu Picchu, Gizeh, and other megalithic sites across the world, in one breadth invalidating any potential claims the island has to a megalithic past, in the same way that Erich von Daeniken or Zecharia Sitchin would.

But, the claims are not completely without merit, though no definite evidence yet exists. At the exhibition, some of the presented photos are reasonably convincing, and, online, there are others. If true, that is, if the island indeed was inhabited at some point before the Portuguese arrived, it’s possible a kind of at least tenuous connection existed between people in the Americas and the Eurasian continent, across the Atlantic, in turn making the Azores, again, a potential candidate for Plato’s Atlantis.
A few years ago, a local fisherman made the claim of discovering an undersea pyramid, just off the coast of Terceira Island. One can dream, but there’s no scientific consensus on this, with even official Portuguese sources not being in agreement on whether the structure is man-made.
But, as with very speculative theories on their arrival on American shores, there’s some suggestive pointers, if controversial, that Phoenicians visited the Azores perhaps 2000 to 3000 years ago.

If indeed, at some point in the past, the Azores were a stopover on the journey between Europe and the Americas, one would think it tempting for some of those itinerants to settle. The islands are isolated, making them safe, the climate is temperate, and the soil is fertile.
While the natural environment can be put to easy and good use. On Pico, I came across a caldera, a volcanic crater, used as a cattle pen, while one of the other islands has a caldera used as a bull-ring.

Now, it’s hard to put my finger on it as to why, but these Portuguese Atlantic islands strongly remind me of rural England, or perhaps places in Brittany. It’s something about the rolling green hills, but also the architecture, with particularly on Pico, the long walls of black stone, protecting the little plots of land once used to grow the local vines, reminiscent of England’s south.

As I was moving deeper into the Azores, the planes also were getting smaller. From Pico to Terceira, the plane only had 37 seats. Fully booked, I was the last to board, taking up the isle seat in the last row.
Indeed, the last row had an isle seat.