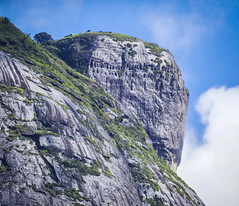 The top of Pedra da Gávea, with the alleged Phoenician inscription 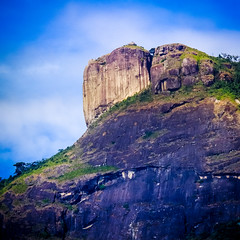 Pedra da Gávea from the 'other' side 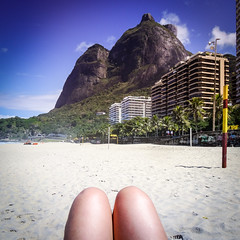 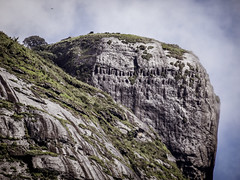 A Phoenician inscription at the top of Pedra da Gávea? 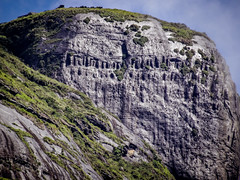 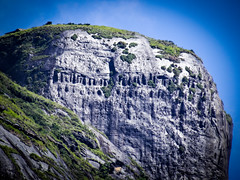 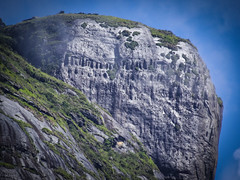 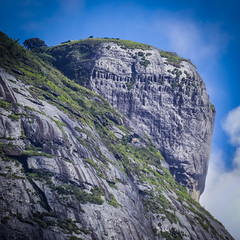 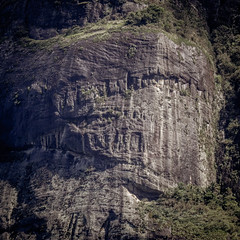 Not a Phoenician inscription 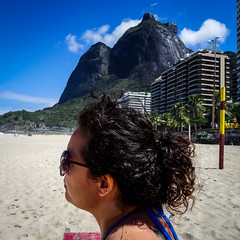 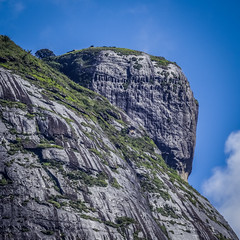 There now is no doubt that Vikings visited North America from around the year 1000 onwards.
Based on the Sagas of Icelanders, prose narratives which were supposedly based on historical events that would have taken place in and around Iceland in the 9th, 10th, and early 11th centuries, historians had speculated about Vikings visiting North America for a long time. However, actual evidence only emerged from the 1960s onwards when, for the first time, a Norse settlement was found and excavated at L’Anse aux Meadows in Newfoundland, in Canada.

Still only speculation is that ancient Romans or Phoenicians, originally from the Levant, the eastern Mediterranean, perhaps also visited the Americas, as much as 2000 years ago, or more.
Occasionally suggestive evidence crops up supporting this claim. Artefacts were found off the Canadian coast a few years ago, while a seemingly Roman terracotta head was found in Mexico in the 1930s. The terracotta head, all agree, is pre-Colombian, though it’s of course not obvious how it might have come to Mexico. Here’s an article with photos.
Then, entering the realm of much more speculative history, the giant Olmec heads, dating back to at least 900BC, to some historians suggest that black Africans, or Egyptians, visited the Americas in ancient times, while even more fringe suggestions include Chinese and Nordic connections, the latter finding support with everyone’s favourite cross-ocean sailor, Thor Heyerdahl.

Meanwhile, circumstantial evidence for Polynesian contact with the Americas in pre-Columbian times has mounted to the extent it’s now nearly undeniable, with evidence of East Asian contact being more shaky, yet not impossible.

Suggestions of old world contacts with the Americas keep on cropping up and are tantalisingly suggestive. Scholars Ivan van Sertima and Gaoussou Diawara proposed some 20 years ago that a Malian king crossed the Atlantic to Brazil, supposedly arriving in Pernambuco, with that name, they claimed, possibly having been derived from the Mande name for the rich gold fields that accounted for much of the wealth of the Mali Empire, “Boure Bambouk”, though the accepted etymological source is the Tupi para-nã (wide river) + mbuka (hollow or broken), apparantly referring to the coastal reefs.

Beyond a doubt, Phoenicians, Carthaginians and Greeks all visited the Canaries, as early as 2500 years ago, but their is no archeological indication they also visited the Azores, though it’s possible they did and plausible they could have.
In De Mirabilibus Auscultationibus, attributed to Aristotle, the author talks about an island in the Atlantic that appears to represent the Americas and was visited by the Carthaginians (in section 84 in the link above). And, a more exotic reading of Diodorus could also suggest Carthaginians having had access to the Americas.

More tangible, Guanabara Bay in Rio has given up a bunch of what appear to be Roman amphora from a shipwreck. One theory suggests these might have come from a Roman vessel being blown off-course, though ending up inside the bay purely by accident seems rather unlikely, if not practically impossible.

And then there are the Phoenician inscriptions in the Americas.

Austin Whittall, several years ago, collected an excellent list of suggestive evidence of Phoenicians in the Americas and looked at hem with a critical eye.

A recurring motif, found across southern South America, is what appears to be the letter yaz in Tifinagh, a writing system for Berber languages. The yaz is also the central symbol of the Berber flag, with the vast majority of present-day Berbers being based in Algeria and Morocco, roughly the lands of the Carthaginians, descendants of the Phoenicians.
The yaz symbolizes the “free man”, which is the meaning of the Berber word amazigh, the Berbers’ own name for themselves. On the Berber flag, the yaz is in red, considered the colour of life. More on that later.
Whittall collected several examples of the yaz in the wild, here. The connection is intriguing, but, besides that the yaz also looks like a stylised lizard, this could simply be a false cognate, like that the word for ‘dog’ in the Mbabaram language is ‘dog’, even though Mbabaram and English has no connection whatsoever.

The one inscription that you can fairly easily check out yourself is in Rio de Janeiro, on the side of the top of one of the mountains on the city’s shore. The mountain, Pedra da Gávea, comes in at almost 850 meters high. Under Brazil’s first emperor, Pedro I, two scientists undertook the first official study of the structure, who pointed out that it was certainly possible the inscription was a chance occurrence, which is the generally accepted theory, today, but that another possibility was that the inscription was man-made, possibly Phoenician.
About a century later, in the 1930s, a Brazilian self-made man, Bernardo de Azevedo da Siva Ramos, presented a Phoenician translation: “Tyre, Phoenicia, Badezir, Firstborn of Jethbaal”, which would have referred to actual historical Phoenician rulers Badezir and Jethbaal.

Later, an Argentine archeologist actually translated the inscriptions as Nordic runes into “Next to this rock, numerous oak planks for ships are deposited on the beaches of sand”. Tantalising, but this seems to me a completely pointless notification in a very hard to reach place.

The inscriptions look more runic than Hebrew, a derivative of Phoenician, and if you look at da Silva Ramos’ text and translation, it’s rather mind boggling how he managed the translation.

A more salient suggestion, proposed more recently, was that the then-emperor might have toyed with the idea of matching Brazil’s past, via an ethnocultural connection, to the old world. But, geologists in 2000, visiting the site, concluded the inscriptions were vertical grooves worn into less resistant parts of the stone.

The inscription is near the top of the mountain, and, though, under good weather conditions, it’s quite easy to suspect the markings to be artificial in origin, when looking at them from the beach, it’s not too likely to spot them in the first place, as there are few locations from where they are easily seen.
Additionally, it’s practically impossible to actually visit the markings themselves; you can get close to them, directly underneath or above them, but you’d have to rappel to actually see them up close.

On the same rock, there’s also a hint of a face distinguishable, close to the potential inscription. But, if man-made, the location is so senseless, and the stylisation so suggestive, there’s, now, no one who does not believe this is an example of pareidolia.

Whittal mentions another possible Phoenician inscription on an island in the south of Brazil. But, using Google Maps to check out the island Whittal suggests is the island in question, there does not seem to be a match.
He also mentions that Bernardo de Azevedo da Siva Ramos, the person who translated the inscription in Gávea, wrote up two whole volumes with names of Brazilian natural features that would have derived from Semitic originals, supposedly being named by the same visiting Phoenicians.

On the weekend, Natalia and I went to visit Mirante das Canoas, a spot up in the mountains hugging the Rio coastline, from which you would have the best view of the inscriptions, though still some 2km away, but with a direct line of sight.
We were unlucky, low hanging clouds were providing rain throughout the morning. But later, on the beach, with clear blue skies, we managed to get a good view.
The markings definitely look artificial, though similar markings, lower down the same rock, appear wholly natural.

Yet, of course, just because these markings might be natural, it’s not proof Phoenicians did not visit the Americas. And, on the opposite side of the same rock, also near the top, there are markings that also hint at them being a man-made inscription. Or the result of the same natural erosion.

One interesting side note is that Brazil’s name originates from the Brazil tree, which produces a strong red die. The Brazilian tree, a relative of an Asian variant, was known, before Columbus, as lignum brasilium, brazilwood. Phoenicia, the Greek term used to describe the people, possibly derives from ‘land of the purple’, which refers to the unique colour, Tyrian Purple, which Phoenicians sold to the Greek and Roman elites.
Tyrian purple was also known as Tyrian Red, thus the first Mediterraneans, or Europeans, to potentially have discovered Brazil, were known for their red paints, red being the colour of life for the Berber people, descendants of peoples living on the north African coast, exactly where the Carthaginians, themselves descendants of Phoenicians, were based in Roman times, whose most important symbol is the yaz, which can be easily found in the south of South America, on the continent where the most prominent country is named after the tree that provides a distinct red colour used in paints.