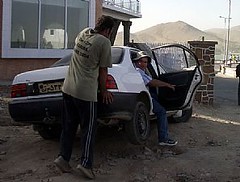 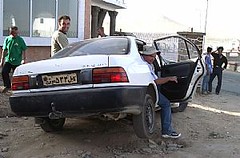 As I was relaxing on my back, in one of the lounging chairs at ‘Anar’ (meaning pomegrenate, whatever that actually is), an Indian restaurant not too far from my house, where we ended up after a very decent hash at Kargha/Qargha (even though the hares didn’t care to set the run and the place was more packed with Afghans enjoying the Friday off), watching the moon shine through the trees and listening to the conversations going on between my fellow hashers, I was pointed out an interesting parallel between myself and my fellow hashers, fellow strangefellows.

More than half of the hashers are of ‘mixed heritage’. Most are stuff like ‘Polish-American’, ‘Scottish-Australian’ or something else relatively mundane, but all of them also had a rather ambiguous childhood as far as heritage is concerned.
It clearly seems that’s quite a prerequisite for doing, and enjoying, the type of work all of these fellows have been caught up in: short term contracts in strange foreign countries with similarly strange people.
It made me feel at home, amongst my kind, and I smiled, looked at the moon between the trees, and chugged down a nice glass of vodka.

Earlier on the hash, I had a nice issue with my car. Parking at the golf course club house, in the parking lot that isn’t, yet, a real parking lot, I was driving out but didn’t avoid the huge holes really well. Stuck in one with my left front weel, my right back weel was hanging about one meter from the ground.
After it was decided the car was going to be pulled out, I decided to try and sit on the hood. A second guy joined me, and then a third, when we managed to get the back wheels to hit the ground. Quite immediately, the car started to slowly move forward.
I jumped off, got into the driver’s seat and slowly manouvred the car out.

Related:  More sights
This text is available under a cc-nc-a license.