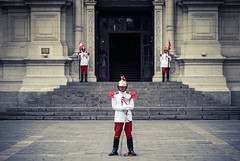 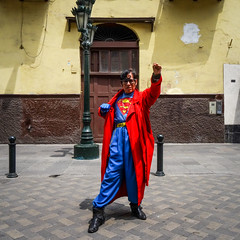 The return of Superman 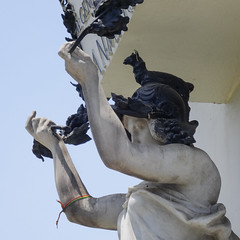 Madam, there's a llama on your head 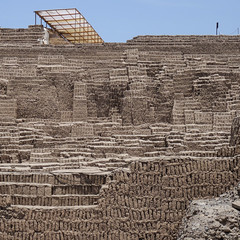 No end to bricks 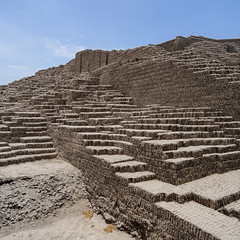 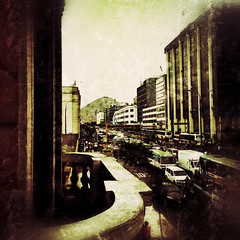 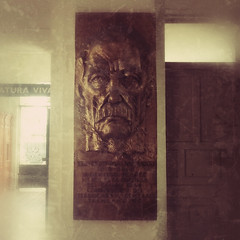 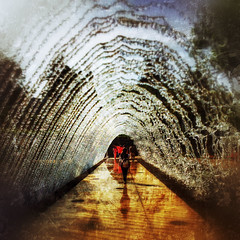 Lima, the second driest capital in the world after Cairo, is a pleasant enough city. Huge, a third of Peru lives here, with a smattering of colonial architecture, due to an 18th century earthquake raising most of the old town to the ground. The old town, which travel guides and fearmongers mostly tell you to avoid is pleasantly lively and, like quite a few other cities in the region, heavily policed. During my stay, part of the old town was sealed off at night, with police in riot gear not so subtly present throughout the day.
A bunch of museums are cheap enough or even free and several come with guided tours.

What makes Lima more than worth a visit is the excellent Peruvian cuisine and the huge variety of excellent foods at awesome prices. Whether it's road side sandwiches, fruit juices, set lunches or fancy restaurants, Lima seems to exist for the culinary experience.
In the city center, the prices are awesome. Less so in the posh suburbs.

At the popular changing of the guards at Plaza Mayor, everyday at midday, a mitary band plays what might be adaptations of local tunes, but also adds renditions of Simon and Garfunkel, the tune to Rocky as well as parts of Carmina Burana.

On plaza San Martin, you can find a statue of a woman, representing 'the motherland'. Commissioned in Spain, the assignment involved giving the woman a crown of flames. In Spanish, 'llama'. She ended up with a a camelid on her had. This is Peru after all.

Also in the center, parque Universitario is a cat heaven. More than 100 cats occupy a corner of the park.

Related:  I iz in ur city, photographing ur murals

Lima has two pyramids within its city limits. Made of mud brick, they are remarkably well preserved. Though they also resemble pyramids less than they do slowly rising terraces. The temples are pre-Inca, built between 200BC and around 500AD.

Downtown Lima is a good dozen kilometers away from the shore, or rather, cliffs overlooking the Pacific. One afternoon, I made my way to the posh suburbs. As I sat overlooking the ocean and the highway next to it, construction workers toiling away in he background, several of the occasional strollers were obvious expats, complete with tiny pet dogs.
It seems that Peru is doing quite well, quickly catching up with more developed countries. Infrastructure is pretty good, as is public transport. But, the huge discrepancies in prices between the posh suburbs and downtown Lima indicate a significant poverty gap. A street side sandwich goes for 30 cents, whereas a sandwich in a somewhat fancy seaside cafe will cost perhaps 6 euros.

As I sat on a bench overlooking the ocian, I had bought a can of beer to while away an hour.
A security guard came up to me.
"excuse me, you can't drink beer here".
"I'm sorry, I didn't know."
"Oh, it's ok if you finish it, just make sure it's not too obvious."