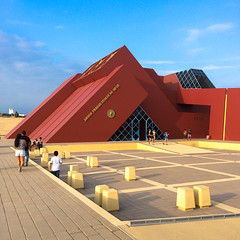 Museum of the royal tomb of Sipan

A commercial hub for the region, Chiclayo is a sprawling city seemingly only constructed in the last 100 years or so, like a central market grown out of control. But, not so. The city was founded in the 16th century and under indigenous control blossomed way before. There just doesn't appear to be much left that's of significant age.

Just north of Chiclayo, the remains of over two dozen pyramids grace the landscape, while just east of the city, only some 25 years ago, the richest native grave site was uncovered by accident: grave robbers got in a dispute while at the site, shots were fired, a man was killed, the police showed up.
Now, the Tutankhamen of the Americas has been moved to a nearby museum in the town of Lambayeque.

The pyramids and temples surround a smallish freestanding mountain, which used to have its own temple at the summit. The buildings were made of adobe, mud, meaning that 500 years of harsh weather has withered them down considerably. Perhaps also why three different sets of temple complexes were originally built in the area.

Related:  It’s the food that makes Chile
This text is available under a cc-nc-a license.