The oasis of Huacachina 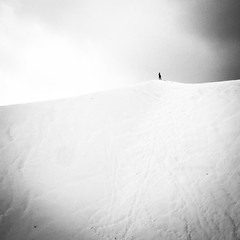 When you stare into the abyss... 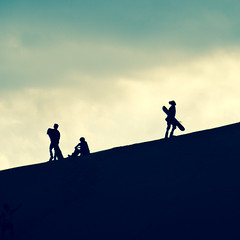 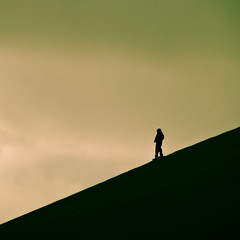 Shit's about to go down 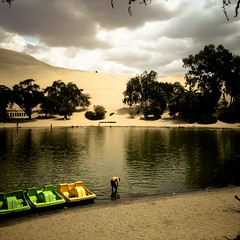 The quiet before the storm

Down at the oasis 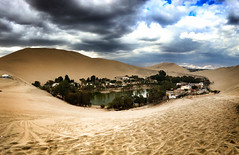 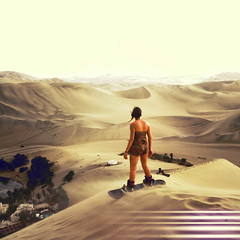 There's plenty to see in Peru. Besides the wonders of Machu Picchu and the mysteries of Nazca, the Ica stones for decades were used by the likes of von Daenikens to impress the world with theories of ancient astronauts and crypto histories.
Spheroid stones with engravings, the earliest finds date from the beginning of the twentieth century and had images of plants and conventional animals. Stones encountered later, purchased mostly from three particular farmers, pretty much giving the spiel away, showed images of dinosaurs, aliens and astronauts.
The main collector of the stones wrote a book on how all known human history was a fallacy and then opened a museum in the late 1990s, in Ica. Then, with the 2007 earthquake, much of the museum was heavily damaged, speeding up its decent into obscurity.

Ica is also the wine producing province of Peru. Besides wine, they also produce pisco, grape schnapps, which is probably more popular within Peru, as the essential alcoholic ingredient in a pisco sour.
The wineries can be visited and tastings can be had. Several farms are within easy reach of Ica, but the heat can be stifling, meaning cycling from farm to farm isn't a thing like it is in Mendoza, in Argentina.

Ica's star attraction is the nearby oasis of Huacachina. Built for the Peruvian elite, it's a dozen or so hotels and restaurants, surrounding a small body of water, itself surrounded by a halo of Palm trees, in turn surrounded by stretches of dunes.
Having been left behind by the local elites, now, the village is popular with both foreign and Peruvian middle class tourists.

Related:  Carnival in Cuenca
This text is available under a cc-nc-a license.