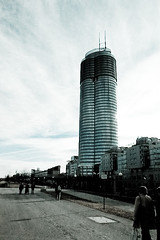 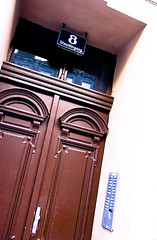 By taking the night train to Vienna, I was able to skip one nights stay in a ho(s)tel in the already expensive country of Austria. I was lucky for the connection between Feldkirch and Vienna being without any transfers.

While waiting for my train to arrive, I headed for a bar close to the place I got my vegi-sandwich and I realized why I like ‘tacky’ places and, related, Eastern Europe, so much.
A tacky bar or restaurant is generally run down, old, in very bad shape, simple. Because of that, it seems to be more ‘real’, more authentic. People tend to be more ‘raw’ more down to earth. In a way, people in these places appear to be more human.

The bar in Feldkirch definitely was an example of a tacky place. Run down, built in what appeared to be the 60s or early 70s, with mirrors on all walls, dirty red tablecloths covered in even dirtier white cloths on small formica tables with steel, wobbly legs. Some balloons to brighten the place up and drab people with drab faces, greasy hair, unshaven faces and brown hands with looks on their faces that said they’d rather leave today then tomorrow for the big city.
In one corner of the bar, two guys were playing an electronic dartboard as if they had been doing that all their lives and their girlfriends, straight from the German punk-scene of the eighties waiting for them to finish. Meanwhile, everyone was allowed behind the bar to get their own beers.
Luckily, the bar at the train station wasn’t much better, the difference being the looks on people’s faces. Probably because they know they would be leaving for Vienna tonight. Possibly because of the babe serving the beers here.

Related:  She walked in the cold air

I love stations. Every station harbors a melting pot of cultures. With its collection of eateries, shops, kiosk and more, it’s a tiny 24-hour economy that caters to all, regarding of race, color or creed. Stations generally have a positive atmosphere to them.

The primary reason for me stopping in Vienna was a visit to an old friend. Jason was part of my ‘G2’ group in Ghana, the second group of Geeks that was sent to Ghana by Geekcorps. American, he was now living with his girlfriend who had obtained a scholarship in Vienna.
We had already agreed on me stopping by months ago, but hadn’t set an exact date yet. The problem was that over the past couple of weeks, none of the mails I sent him were answered and, later, it turned out his slightly less then effective spam filter got the better of me. I was going to try and find him. I had an address, but no telephone number.

I figured it wouldn’t hurt to try and reach him again, when in Feldkirch, but both a lovely girl and a lousy old lady told me that, no, Feldkirch didn’t have an Internet cafe. The Internet kiosk I did find, smack downtown Feldkirch only returned multiple ‘File not Found’s.

The ride to Vienna was pleasant and, most of the time, I had a whole bench to myself, being woken up for an hour at around 4am by two older ladies who came into my compartment and kept on chatting continuously. I figured they had to be on drugs.

In Vienna, I managed to find the right address, although the name tag claimed someone else occupied the apartment. Ringing the doorbell didn’t help either and none of the people that entered or left the building seemed to know my American friends. I decided to try and find his place of work.
I vaguely remembered he had gotten a job as something of a ‘resident writer’ at the university his girlfriend was studying at. Vienna has about five universities, so I tried my luck. With no luck. Asked around at three universities and was helped by friendly staff, but finding an American in Vienna seemingly is harder than finding a needle in a haystack.
Later, when back at home, mail messages started to come back from Jason. It turned out, at the time of my standing in front of their door, they were still asleep, figuring that it was the chimney sweeper calling at their door. They don’t have a chimney, therefore…

One final mail message from an Internet cafe close to the train station also didn’t help and I got myself a train ticket to Gyor, in Hungary. Zagreb, Ljubljana and Budapest were all quite unfordable, Gyor manageable.

Having visited Vienna a number of times over the years, only now did I realize that the city easily fits with cities like Prague, Budapest, Bratislava or Bucharest. Vienna is very central European. Lots of art-nouveau in a slightly gray city with lots of green stretches and, of course, a big bursting river flowing right through it.
Waiting for the time to catch my train, eating some bread and cheese on the shores of the Danube, I was approached by a 30-something, clearly homosexual male: “Are you available, perhaps?”. I made it clear I wasn’t and saw him walk up to an old lady, asking her the exact same question. She took it as “Are you married, perhaps?”, to which she replied: “Married, no. Unfortunately not, young man…”.