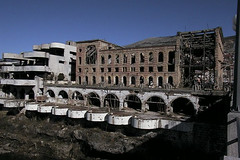 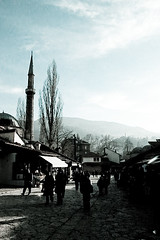 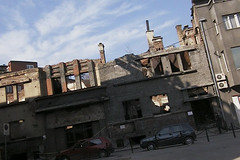 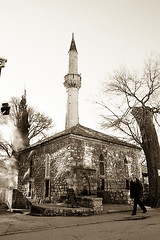 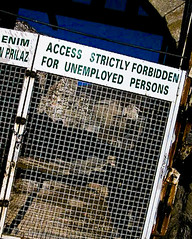 Not for the jobless 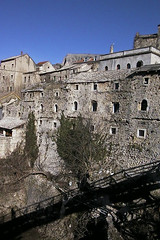 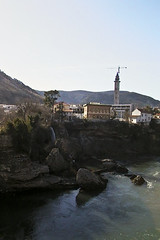 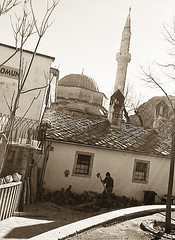 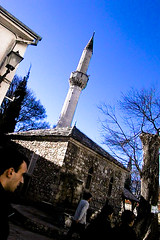 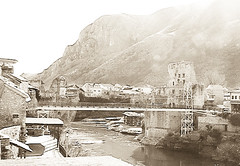 It isn't hard to find traces of war in Bosnia. Although the road from Ploce to Mostar has been cleared, parts of Mostar itself still look like the battle only ended days ago. During the war, the front ran right through the town. Many of the houses, away from the front, have now been restored, but the houses on the street that used to be the front are still unusable. With on one side nothing but facades, on the other empty carcasses.
The old bridge in Mostar is being restored, in part with financial support from the Dutch government.

The town itself, and most particularly the Islamic part of town, is lovely. Small cafes, bars, restaurants with a relaxed atmosphere caused by the crowded terraces on the main streets.
I even found a whiskey bar and, next to it, a big Internet cafe that would make EasyEverything proud.

But don't ask for a cappuccino. These people like their coffees Turkish style. The cappuccino is Turkish coffee with a wad of whipped cream on top and a mountain of sugar inside.

The city is surrounded by hills and a deep lying river flows through it. This, combined with the narrow streets and the old architecture make for a pleasant town. Although it's still well within Europe, Bosnia already displayed its Turkish Islamic origins: The muezzin's call to prayer, five times a day, was unmistakable.

Using the tourist office, I ended up at a 'privat zimmer' for 25KM, Konvertible Mark, equal to the old Deutschmark. The owner of the room picked me up from the tourist office, dressed like one would expect a 50 year old Slavic woman to dress: A huge figure with black hair going off in all directions, a vaguely blue body-warmer over an old reddish sweater, baggy light grey pants and sandals.
Speaking nothing but the local language, I had to communicate with her through her daughter, who had prepared an extensive dinner upon my arrival.

At the tourist office, I also bumped into a Japanese guy. Like me, he wanted to travel to Sarajevo the next morning. I suggested drinking a beer that night, but he wouldn't have it, claiming that, judging from the military on the streets, the city would be too dangerous after dark. I figured that the only danger would be me falling into the river after drinking too much of the local brandy.

Crossing the border into Bosnia, I was taken off the bus for investigation. Close to being strip searched, the lovely girl asking me all sorts of questions was already putting on white gloves before a colleague stepped in to tell her she really didn't have time for 'that'. Not knowing if I had to be glad or not, I put everything back in my bags and left.
At every planned stop on our way into Bosnia, everyone left the bus to check the status of Milosevic's trial in the Hague. Not being interested that much and not understanding a word anyway, I noticed that the water level in the Neretva was about 15 meters lower than normal.

At night, enjoying a good cigar in an alcohol-free restaurant serving fantastic food, I wondered if the heavy smoking these Bosnians seemed to be doing influenced the rapid decline of the looks of Bosnian women after 35.
Of course, smoking is bad for your health, but could something else be going on? It has been proved that extensive smoking influences the length and the firmness of an erection, particularly at a later age. It follows that elder people have less sex because of this, which, in turn, possibly influences the ladies' drive to look good.
Maybe they start to look worse and worse after 35 because there is no reason for them to look good; all the men are near-impotent anyway.

Related:  The most pleasant Caucasian capital

Sometimes, tiny details also get noticed: All toilets in Slovenia, Croatia and Bosnia carry pink toilet paper. Not on a role, but as individual pieces of paper.
Also, prices are rounded of to exact amounts. So a beer doesn't cost 1.95, but 2. Could it be that inexact amounts are common in regions were tipping is expected?

I realised that the Japanese guy and myself were the only foreigners in Mostar. Although, in Europe, over the past years, more and more tourists have gone east and south, countries like Bosnia and Albania have been left unexplored.