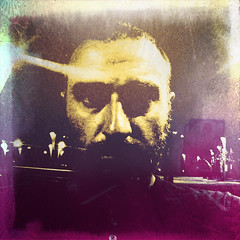 I was asleep when it happened, so I'm not sure of the sequence of events, but on the bus from Nazca to Cusco, we ended up in the ditch on the side of the road, leaning against the rock face. I woke up by the underside of the bus scraping across the ground. The window was opaque with condensation, so I couldn't see outside. Women were screaming in the back. I was trying to hold on to what I could find and thought "well, this would be shitty".
Luckily, we crashed on the side of the road that was not the ravine.

Peru has three distinct geographical regions; the Andes mountains, the coast, which is where the Andes slowly rolls down towards the shore, and the west end of the Amazonian basin. Puerto Maldonado, in the eastern corner of Peru, close to both Bolivia and Brazil, is in the Amazonian basin. Puerto Maldonado, with its tropical vegetation, hordes of motorbikes and tuctucs, feels more like a minor Vietnamese or Philippine town than being smack in the middle of a south America.

I stumbled upon the celebrations of 112 years of Puerto Maldonado. Multiple stages, live music, parades of school kids in uniforms and street parties until at least 10pm. It was almost madness.

Fairly recently, the highway linking the pacific with the Atlantic, from Lima to São Paulo, was completely tarred. Most of the Peruvian side is in very good condition, and tolled after Puerto Maldonado (though there is a section between Cusco and Puerto which is closed at night), but the Brazilian section, at least between the border and Brasileia, which is he border crossing with Bolivia, is in dire straits, resembling an African country road.
Only one bus company does a scheduled trip between Puerto Maldonado and Rio Branco, still a good 200km after Brasileia, and the first major town within Brazil, but runs only twice a week.
I went at it alone, which turned out to be reasonably straightforward, but also showed the lack of traffic plying the route. Between Puerto and Brasileia, no trucks crossed our paths, and the whole trip had to be done in three stages. In Puerto, several minibusses do border runs, leaving, when full, from 4am onwards. At the border, I joined three people in a shared car to Brasileia. There, I had to wait for another shared car to fill up before leaving on the last leg.

Related:  A return to Brazil
This text is available under a cc-nc-a license.