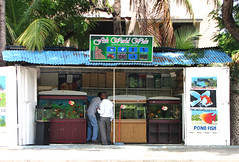 For our ride back to Lusaka we originally envisioned taking the bus back. However, the preferred bus company has recently gone bankrupt, the, so it seems, only surviving contender providing a passable but challenging service. That, and the busses leaving on the wrong days from Dar, meant that our only real option for leaving the haven of peace was by plane, using Zambezi airways, which luckily was offering cheap return trips from Dar to Lusaka.
Gambling on my return to Dar before signing my contract with Twaweza, we both booked round trips. The gamble paid off. I’ll return in two weeks time.

Entering the country, we had another nice brush with Zambian bureaucracy. Though this time, for a most pleasant change, the immigration officer was more helpful than most.

When I obtained my Zambian visa from Brussels, I found that the wording used in the stamp in my passport was rather ambiguous. Or rather, it wasn’t too ambiguous, it was simply missing information. For one: it didn’t say how long it was supposed to be valid for, even though I paid for what was to be a three month double entry visa.
The visa did say it had to be used within three months of the date of issue. Then, after entering the country, I was assured, it would be valid for three months.

So, I got the visa on October 7. We re-entered Zambia on January 6. Indeed, just short of three months. Meaning that if I had entered the country two days later, or perhaps even one day later, I would not have been allowed to use the double entry visa for my second entry, even though my first entry was well within the three month limit.

Niamh had a harder time getting in. Her HR department isn’t too professional, resulting in the extension of her temporary work permit, as we found out at immigration, only having been validated for another 30 days, not the three months it was supposed to have been.
Thankfully, the immigration officer let us through after making a fairly simple report of the situation, not demanding any form of cash transfer.
In fact, a Dutch lady entering the country just after us, in country to visit some orphanage close to the capital, got half her visa fee waived from the same guy.