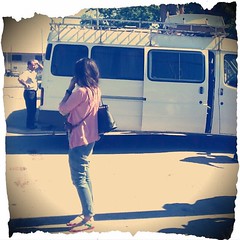 Stepanakert, also called Xankendi, is the most remote capital in Europe. Baku, the capital of Azerbaijan, is the easternmost, being even further east than Baghdad and nearly as far east as Tehran. Stepanakert is the capital of NKR, the Nagorno-Karabakh Republic, and it's the most cumbersome to reach.
Though Stepankert's international airport was recently completed, flights have not yet commenced, in part because of Azerbaijan's fierce rhetoric on allowing what they consider enemy planes in their airspace. So, the only way to get in is by road.
In fact, just the day after I left NKR, border clashes between NKR and Azerbaijan left several dead.

The Nagorno-Karabakh region is considered to be something of the cultural heartland of both Azerbaijan and Armenia. An enclave inside Azerbaijan, the shit started to hit the fan at the end of the 80s, when Gorbachov declared glasnost and the Soviet Union was falling apart. The whole Caucasus has seen territorial spats for thousands of years, particularly Russians, Turks and Persians fighting over who would control what part of the region, but the internal conflicts specifically started coming to a head after the first world war, when the Ottoman Empire reassessed its sphere of influence and, eventually, let Russia run away with the spoils in the Caucasus.
Then, when Gorbachov allowed more dissent, the Nagorno-Karabakh province, inside Azerbaijan, voted for unification with very nearby Armenia. The results, from roughly 1988 to 1994, included about a million displaced persons, all out war and, eventually, an ethnically pure Armenian Nagorno-Karabakh, with Armenia in control of the province as well as about 9% of Azerbaijan's territory outside of the enclave, which includes a road corridor between Armenia and NKR, the NKR's only link with the outside world, as well as the enclave of Tigranashen, Karki to Azeris, through which you pass on your way from Yerevan to Goris, close to the NKR border.
A cease fire was signed in 1994, but the tensions are still there. The border between Armenia and Azerbaijan is closed, Azerbaijan consistently refers to Armenia as The Enemy Nation, even in a magazine by and for expats, and you can only get into NKR from Armenia.
And because you can get into Armenia only through Georgia or Iran, both Azeri and Turkish borders being closed, Stepanakert is Europe's most remote capital.

But is it a capital? NKR is still, de jure, a part of Azerbaijan. However, it is not administered by Azerbaijan which, de facto, makes it independent, though, in practice, much of its affairs are run by Armenia. It's currency is the Armenian Dram, it's cars have Armenian license plates, it's language is Armenian. They keep Armenian time (which my Apple products don't seem to understand, thinking that Yerevan time is one hour ahead of Tbilisi time).

Yerevan to Stepanakert is about 330km and can be done in 5 to 6 hours, depending on how often you stop. It took us close to eight, with a driver who put the pedal to the metal as often as possible, the reason for our delay being a breakdown. But not our own. For unfathomable reasons, our driver drove in convoy with another minibus, and it was that minibus that gave up the ghost, and our driver refused to leave his friend's side, meaning that 32 travelers were stuck in the middle of nowhere. Twice, as twice the second bus was replaced with a minibus that had to be driven in from somewhere. On the up, the drive takes you through gorgeous landscapes.
First a prolonged view of Ararat and its sister peak, from as close as you can get without being shot at by Turkish border guards. Then the fantastic gorges, mountains and green hills of southern Armenia and NKR. Also, though it's already early June, the drive took us so high up that we could see snow. Below us. And then there were the men on horseback, and the hundreds of sheep and cows that were migrating, using some of the roads as their tracks.