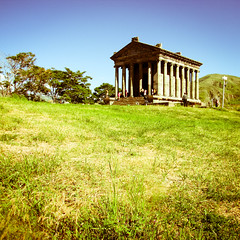 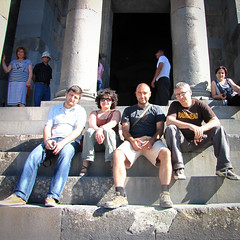 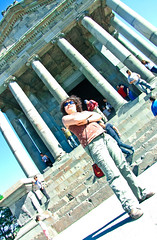 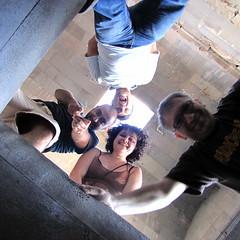 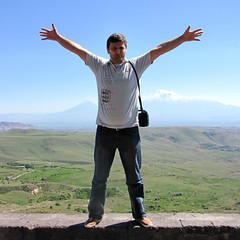 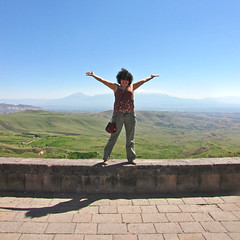 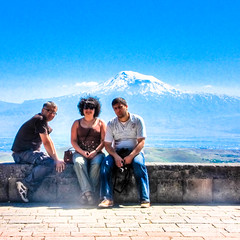 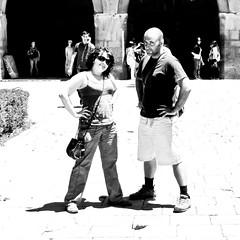 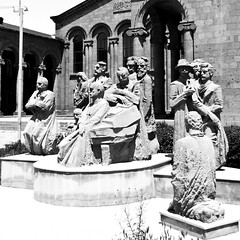 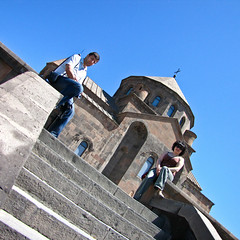 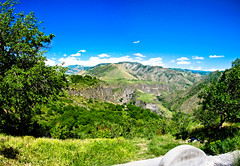 The view at Garni 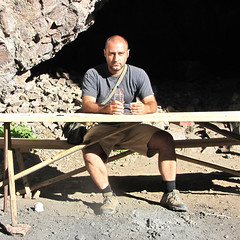 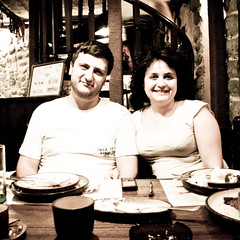 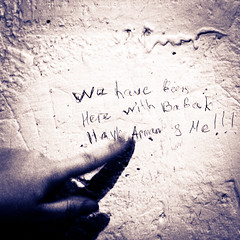 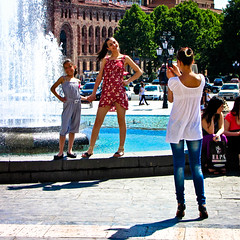 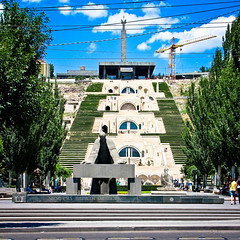 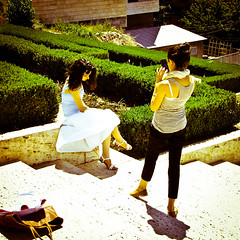 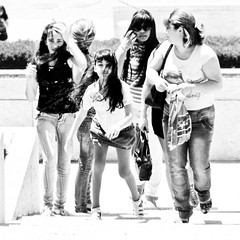 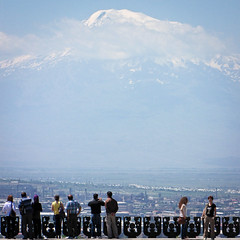 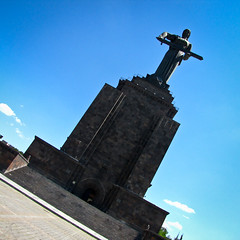 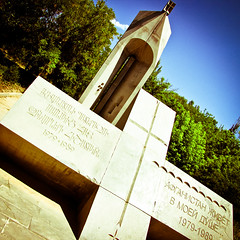 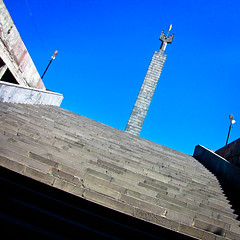 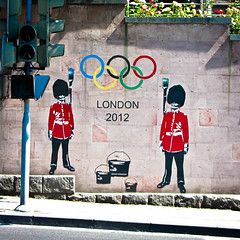 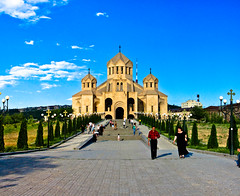 Overlooking Yerevan, Ararat in the distance 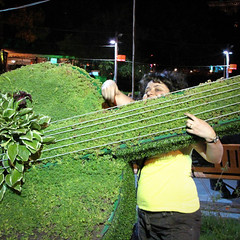 I will play you the song of my people 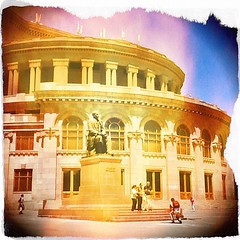 As far as first impressions go, Yerevan easily beats Tbilisi and Baku to first place for being most pleasant. The city radiates a friendly air, It’s (mostly) warm and dry with clear blue skies, surrounded by mountains, relatively small, packed with museums, street cafes and art, it’s cheap, the girls are quite gorgeous and people appear to be very friendly and talkative. On the whole, Yerevan appears to be friendlier, more genuine and less pretentious than its two neighboring capitals.
Downtown Yerevan is in reasonably good shape, while there’s still quite a bit of refurbishing going on, though not nearly as much as in Tbilisi. However, driving into town from the provinces, it does seem like there’s very little economic activity outside of the capital, which is probably related to the estimate of MicroSoft’s representive to Armenia’s estimate that about 2.5 billion USD gets remitted to Armenia every year, on a budget of about 18 billion.

Sure, my appreciation for Yerevan is helped by an excellent host in my hostel, as well as the outstanding welcome I received from a friend of an old acquaintance.
But also, the three nights I have scheduled in Yerevan will not be enough to see the minimum of sights I want to see in and directly around Yerevan. The city seems to have more to offer than its Caucasian neighboring capitals.

Susan, her husband Hayk and their business partner Arman took me out for the day into the gorgeous countryside outside Yerevan. We saw a host of impressive churches as well as a few monasteries.
Armenia was the first country to adopt Christianity as it’s state religion and prides itself in its Christian tradition. Also, the Sunday we were out being some particular saint’s commemoration day, most of the churches saw elaborate services, overrun with Armenians and, seemingly, all the foreign tourists in the country, not too many in itself, which meant a lot of chanting, including impressive call and response singing by male and female choirs.

One typical Armenian manifestation of Armenian Christianity are khachkar, stone stele, typically bearing a cross and other Christian iconography. Apparently, khachkar only started appearing in the ninth century, even though I can’t shake off the thought that there might be a connection with Turkic stele, or, simply, gravestones in general. As in, if you have a bunch of Turkic stele lying around, and you’ve just shaken off Muslim control over your little country, perhaps you’d want to add insult to injury by reappropriating their grave stones.
It’s not complete conjecture, the Lonely Planet briefly mentions khatchkars’ pagan origins, but I can’t find anything about this online.

An often recurring motif in Armenian Christian art is a facetted circle which, I’m told, represents eternity. Sure, but it’s obviously pagan in origin, having no parallel in conventional Christianity, I suspect representing the sun as the eternal ‘center of the universe’ and the earth’s movement around it, a leftover from an earlier heliocentric religion, perhaps Armenian’s adoption of the Zoroastrian Ahura Mazda as Aramazd as the father of all gods.

Interestingly, Armenians celebrate Vartavar (roughly translated as ‘rising of roses’), around the time of the summer solstice. Derived from a pagan holiday, kids,and teenagers sprinkle water on as many people as they can. Songkran, Thai new year, obviously comes to mind.
There might be a connection between Armenia’s and Thailand’s festivals, and it’s not even too much of a stretch, at least on the surface of things. Vartavar, celebrating the new harvest, is associated with the pagan fertility god Astghik. predating the introduction of the Hellenic and, later, Christian, pantheon to Armenia. Her name means ‘little star’. The festival is currently celebrated 98 days after easter, but that’s obviously a Christian superposition.
The word ‘Songkran’ derives from the Sanskrit Sankranthi, referring to the transmigration of the sun from one zodiac sign to another. Celebrating the new year with Songkran, now in April, the festival is a derivative of the Indian Makar Sankranti, celebrating the sun’s transition from Sagittarius to Capricorn, roughly the 21st of December, and with that, harvest time, at least in some parts of India.
Perhaps the splashing eachother of water is to commemorate that the water isn’t needed for the land, because it’s harvest time?

Related:  A visit to Andorra
This text is available under a cc-nc-a license.