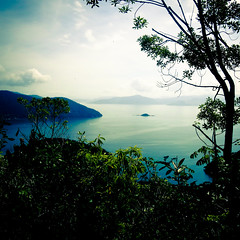 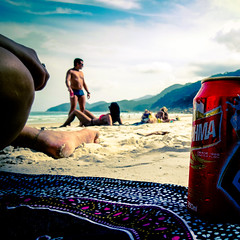 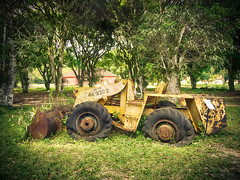 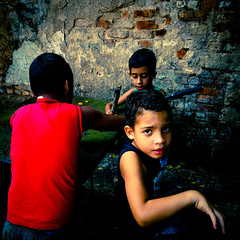 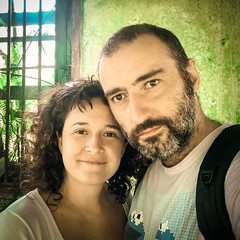 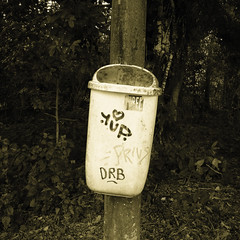 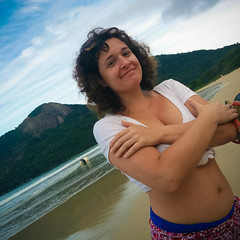 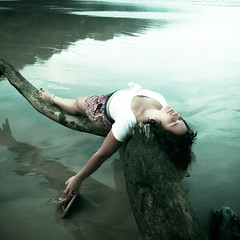 Brazil, like most catholic countries, celebrates Corpus Christi, that is, the belief that blood and body of Christ are truly and really present in the Eucharist. On the day of the celebration, often, there’s a procession of altar bread and wine, displayed in a monstrance, which often looks like a solar disc on a pedestal.
We bumped in to one such procession while we took the opportunity of the associated long weekend by heading out to Ilha Grande, one of the most popular tourist destinations in Brazil. On the coast, roughly halfway between Rio and Sao Paulo.

Now, nearing winter, the island is pleasantly quiet, with the majority of tourists being foreigners, who don’t have the luxury of heading out to Ilha Grande whenever they feel like it, or only when it’s nice and hot. And, yes, though daily temperatures easily rose above 25 degrees, I once or twice felt it a good idea to wear a sweater, at night. But, then, being too lazy to get up and get one, and still feeling quite comfortable drinking a cold beer, overlooking the bay in front the island’s main, only, town, meant that what constitutes ‘cold’ is rather relative.

Ilha Grande also has a more notorious side to it. For almost a century, the island was closed to the public, first because it housed a leper colony, and then, until 1994, a high-security prison, home to some of the most dangerous prisoners in Brazil.
Now, tranquility is king, but some two dozen people were killed as recently as 6 years ago due to a mudslide after heavy rains. But, times were much tougher, particularly between the late 1960 until the prison closed.

After the 1964 coup, political prisoners were also being sent to Cândido Mendes, the prison, which, after they started to collaborate with the more regular, and typically more violent, inmates, resulted in the creation of perhaps Brazil’s deadliest crime syndicate, the Red Phalanx, or Falange Vermelha. Perhaps originally coming from a political ideology, the group changed its name to Comando Vermelho in the early 1980s and now primarily engages in arms and drug trafficking, active in roughly the northern half of the South American continent.

Conditions in the prison deteriorated, with the Comando Vermelho in control. In 1993, just a year before it closed, photographer Andre Cypriano spent several months documenting the daily life of those stuck in this Brazilian version of displeasure.

Upon closing, residents of the island were shattered, the prison and its network being their sole income. But, quickly reinventing themselves and the island, realising the tropical appeal of tourism on their abandoned island, things turned around quickly.
The prison has been torn down, the outer walls all that still stand, but one former prisoner, Julio de Almeida, who once managed to escape but was sent back after four years in Rio, ended up staying on the island for over 50 years. He still lives close to the prison, where we accidentally bumped into the man.
We found our way to Dois Rios, the little cluster of houses next to the former prison, by bike. The 9 kilometres or so from the island’s main settlement belies how tough the climb actually is. The reward, besides gawking at the little settlement, is a gorgeous and almost empty beach.

A popular trek is the hike to Lopes Mendes, a beach some two hours away by foot, through the jungle. But, so popular, if with gorgeous blue water, that, even now in late autumn, it felt a bit like being on the beach in Copacabana or Leme.
On the trek to Lopes Mendes, the second most common tourists, after foreigners, were Paulistas, Brazilians living in Sao Paulo. All of them easily recognisable by their clothes and behaviour. But, in Vila do Abraão, the main village of the island, it was also easy to spot the lower middle class Cariocas, people from Rio, many of them having taken the slow, but cheap, municipal bus from Rio, saving almost two thirds on the price of the faster, intercity bus.
We traveled with them on the way back to Rio, passing the distant Carioca communities, now filled with those forcibly displaced to make room for the upcoming Olympics.