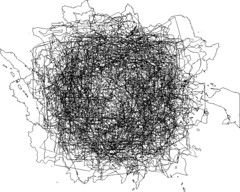 Google’s reverse geocoder, an API that tells you the address of a location on earth based on a latitude and longitude, does not work for locations within disputed territories. This might seem obvious at first, as it’s not clearly defined which country a disputed address is in, yet Google Maps, and many other mapping services, as well as such old fashioned things as atlases, have no problem with mapping disputed territories.

We stumbled upon this during the development of Kompl, where we determine what the name of the location of the user is, based on their latitude and longitude.

Here’s a list of a few disputed places, linking to the result of Google’s reverse geocoder. All return zero results.

The list of contested territories is large, as evidenced by Wikipedia.

We were not the first ones to discover this, though. A few StackOverflow questions (1, 2) show that others stumbled upon this issue as well, but only for a few local results.

Related:  Switching from Google Reader
This text is available under a cc-nc-a license.