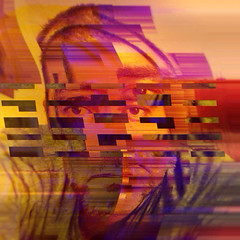 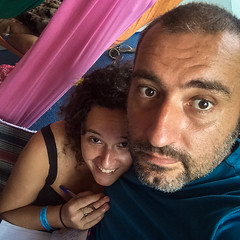 We're on a boat 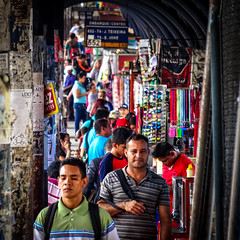 A coming and going 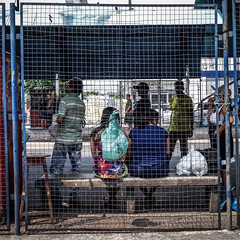 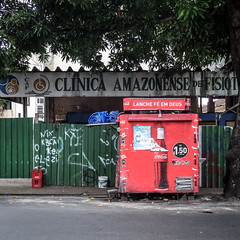 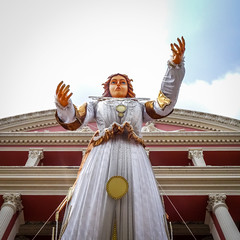 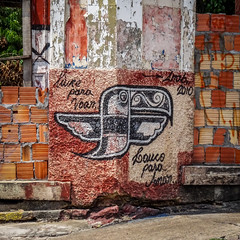 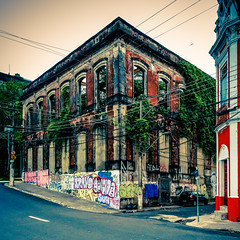 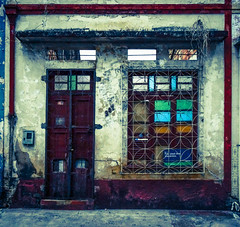 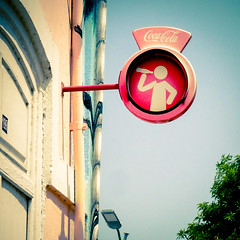 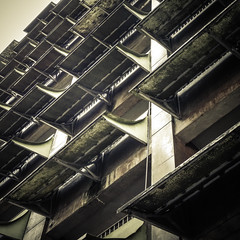 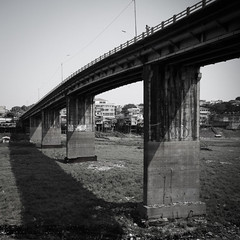 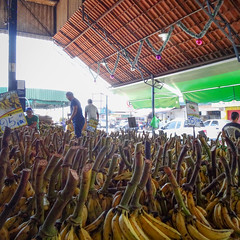 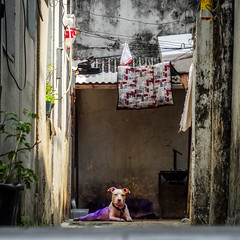 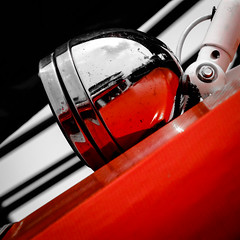 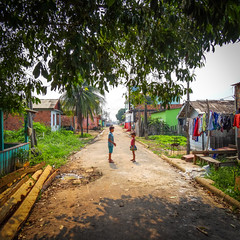 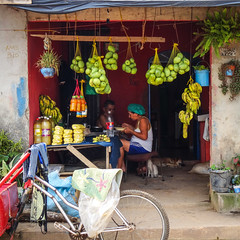 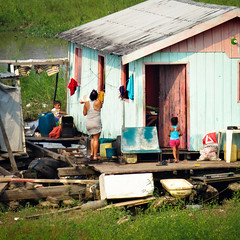 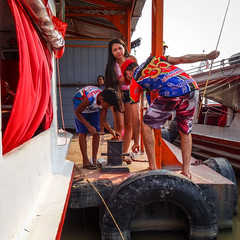 Proud of the catch 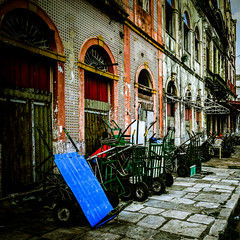 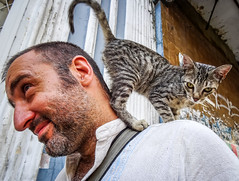 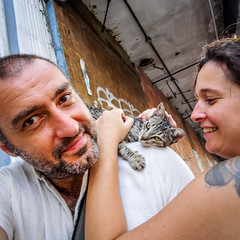 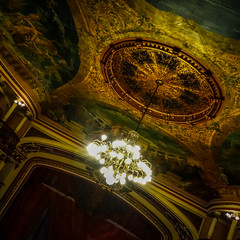 Inside the opera house 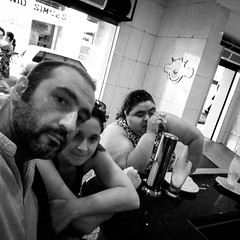 Leaning in for the picture 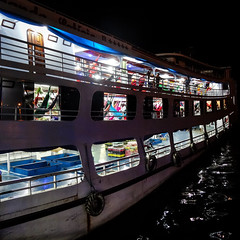 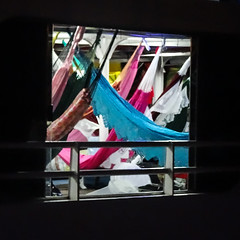 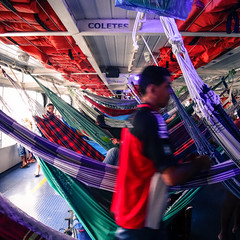 It's busy on board 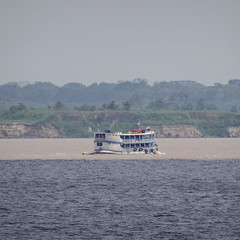 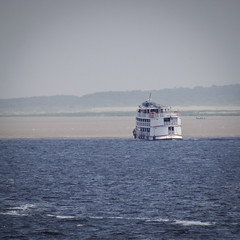 The meeting of the waters 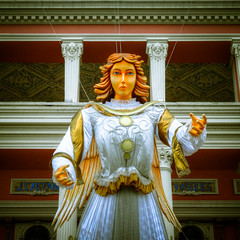 In the heart of the Amazon, Manaus was at the height of its powers at the end of the 19th century. Brazil had a monopoly on rubber and Manaus was at the center of it.
So much money was being made, the city had one of the world's largest opera houses built, inaugurated in 1897, that saw the biggest names of the times travel down the Amazon river to perform for the country's biggest rubber barons. Though financing took a while to come around, when finished, tiles, glass and marble came from as far afield as France, Italy and Scotland. Earlier, Manaus was the first Brazilian city to be 'urbanized' and, it's said, the second to be electrified.

But, it didn't last. Already in 1876, the British traveler Henry Wickham took a small truckload of seeds with him from Santarém, halfway between Manaus and Belém, nearly on the Caribbean coast, to the Kew gardens in London, from where they were distributed to, amongst others, Malaysia, Sri Lanka and tropical Africa. It's often said that Wickam stole the seeds but, though he might have misrepresented his cargo to more easily obtain an export permit, there was no Brazilian law at the time preventing the export of rubber tree seeds. And, perhaps Wickam was looking for some compensation, both his mother and sister had died in Santarém by the time he left for England.
Rubber trees take a while to grow, and, a few decades later, with the rise of specifically Malaysian rubber plantations, Manaus had lost its primacy, slowly sliding into decline. A brief rekindling happened during world war two, when Japan blocked the rubber trade from Malaysia to the US, but, with the discovery of synthetic rubber at the end of the war, this resurgence was short lived.

Now, it took many decades for Manaus to start on the road to recovery; Brazil's previous president, Lula da Silva, initiated the Bolsa Familia scheme, something of a guaranteed minimum income. Which brought much needed financial support, from the bottom up, to the region in general, and Manaus in particular.
Added to that, one of the infamous white elephants, a stadium built for the 2014 World Cup, but in a city with little football action, was a questionable, if temporarily successful, addition to the financial impetus of the city.

But, now, the city is mostly faded glory. Fin de siecle architecture is everywhere, but much of it in urban ruins. Even buildings right next to the city's centerpiece, the opera house, or in the middle of the port, are often in dire straits.

Manaus, is actually on the Rio Negro. The Amazon rivers starts just outside the city proper, where the Rio Negro and Solimões meet. The two rivers, one almost black, one muddy, have very different temperatures and consistencies, resulting in the two rivers taking a while before being properly merged, the dividing line between the two of them being very clearly visible as the 'meeting of the waters'.

Also just outside of Manaus is the first bridge across the Amazon, only completed in 2009. Though technically on the Rio Negro, there is still no year-round reliable road connection between Brazil's south and Manaus. But, the cost of crossing the river went down from around 45 euros for a trip, by car, to zilch.

In the port, next to a fairly new passenger terminal that doesn't really seem to be used much, is a huge plaque, hanging off the side of the port. Every year covered by the rising tides of the river, and then marked, it;s a record of the highest level the river reaches each year. The difference between lowest and highest level during any year can be as much as 20 meters, which is also almost the difference between years with the river at its highest and lowest levels.

It's cliche, but the Amazon and its tributaries are the highways of the jungle. It's almost impossible to get to Manaus from the Brazilian south, by road, but from Manaus, boats leave in all directions, effectively linking up Ecuador, Peru, Colombia and even Guyana with the Brazilian hinterland.
The port of Manaus is a bustle, with dozens of three and four story open boats waiting to leave at any time of the day. All will have a few expensive cabins, but the open decks are designed for hanging hammocks at impossibly small distances from each other. It's not unlikely to be be able to, when in a hammock and stretching out both arms, to touch the hammocks of your neighbors, two hammocks over.
In style, we had a preacher deliver the world of the lord, loudly, just before leaving for Santarém.
It's forbidden for couples to share a hammock.

For being in the middle of the hot and humid Amazon, the number of juice shops is surprisingly limited. But, the ones that do exist have an exotic mix of fruits to try. Guarana with egg and honey, anyone?

One night, we went drinking in a road-side bar, where samba was being played live and the crowds were going wild. One older woman was dancing samba with a full glass of beer balancing on her head.