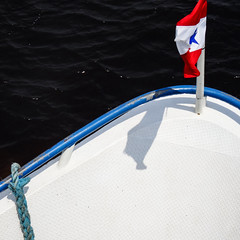 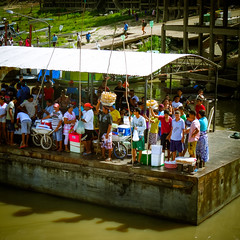 The market economy in action 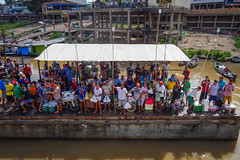 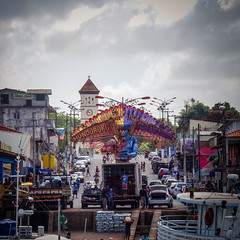 Santarem is at the heart of Brazil's soy growing region. The industrial port is large, but it's tourist attraction lies just outside the town proper. The village of Alter do Chao, just before the mouth of the Tapajos river, hosts sandy white beaches on clear blue waters. Just before the river plunges into the murky waters of the Amazon.

Taking the boat from Manaus to Santarém, the hammocks where hanging cheek to jowl, where we had to, on several occasions, fence off latecomers wanting to hang their hammock where there really was no more space. Already, with my hammock hanging lower than Natalia's, I was effectively sleeping under her, instead of next to her.

Food is not included on this passage, but reasonable and reasonably priced food is served at breakfast and dinner time. During dinner, one of the passengers took out a guitar and harmonica and played for the scraps others left behind.
An American couple who had started in Ecuador, had spent three months, on a simple and self built raft, getting themselves to the Brazilian border, crossing Peru along the way. At the border, the federal police didn't let them continue and they had to complete their journey on the Amazon like the common people, by purchasing a ticket.
In Ecuador and Peru, to obtain food, they had brought thousands of fish hooks, ordered off Amazon (haha) for 100USD, trading them in batches of 50 for bags of fruits and other goodies.

It's only a day and a half from Manaus to Santarém, but the excitement upon arrival was palpable. But, Santarém is not too interesting, besides its impressive waterfront on the vast river.
The city is a beehive of activity, though. With few major urban centers in the wider region, Santarém is the most important trading town for miles around. And, with much of the soy being shipped to China, it appears that the ships coming to pick up the soy, from China, carry all sorts of platic goods, shoes and cheap clothes into Brazil.

Related:  Shipwreck, guano and beer
This text is available under a cc-nc-a license.