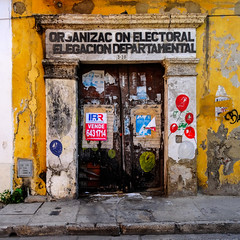 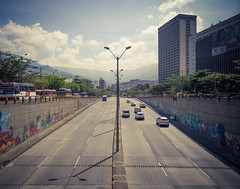 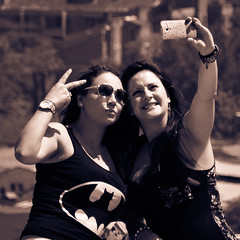 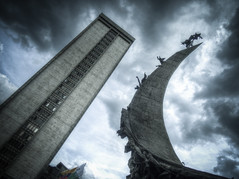 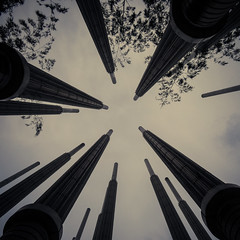 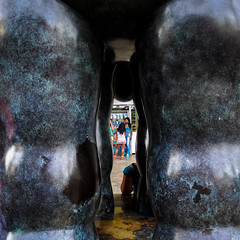 Between the horses legs, a lady of the night 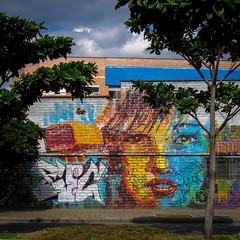 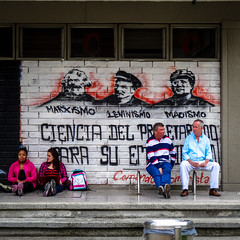 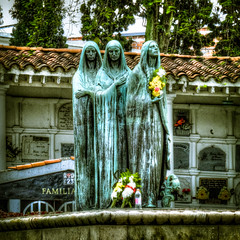 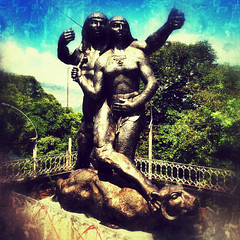 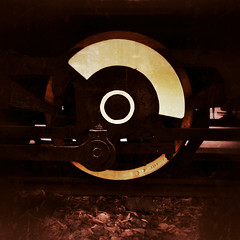 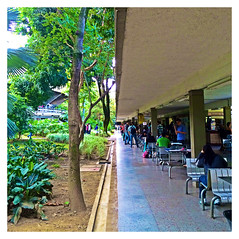 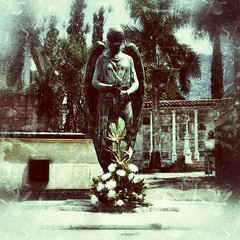 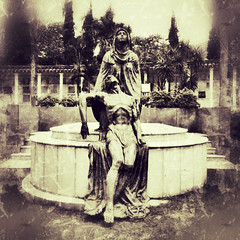 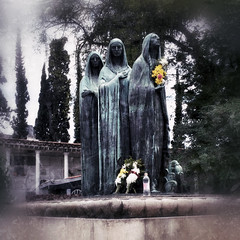 A more than passing resemblance exists between the layouts of the cities of Medellin and La Paz. Both, sprawling cities surrounded by mountains, edged by slums accessible by cable cars.
But, Medellin has lost virtually all its colonial architecture and feels much more affluent. It's also one of the few cities on the continent and the only one in Colombia that has a metro. Or, sky train, mostly, which also brings up similarities with some south East Asian cities, the level of development appearing comparable. And, this is somewhat reinforced by the Asiatic ethnic features of some of the Colombians.

Medellin aspires to greatness and claims to be built on seven hills. Also interesting is that the region, Paisaland, was originally primarily occupied by two groups. One of Basque origin, the other Jews. Years of mixing has eradicated those origins.
Medellin's metropolitan cathedral is a huge church made of brick. Apparently, it's one of the largest brick churches in the world. (The biggest is in Gdansk.) For the 2008 edition of the Lonely Planet, a lazy author only called around for info on updating the guide and ended up being misinformed, listing the church as the largest in the world.

Downtown Medellin gives off a feel of reclaimed inner city, similar to Johannesburg, say, or perhaps also São Paolo. But, this is hardly surprising as, specifically after the killing of Pablo Escobar and the subsequent Uribe presidency, Colombia in general and Medellin in particular, completely turned their safety and security records around.

In Medellin, in part, this was done by refurbishing large parts of the city's favelas, as well as connecting them to a city wide public transport grid. Medellin pioneered the concept of using cable cars for public transport to connect the slums on the city's crowded mountain sides. With that also came the creation and maintenance of public spaces and the initiation of public cultural centers, within the favelas. People living in houses that had to make way for providing this connectivity were relocated by the state with the objective of not disturbing the social cohesion of the groups involved.
Personal drug use, including cocaine, was decriminalized.

Related:  Christmas on the river Kwai

The concepts, after proving successful, were copied by a myriad of other cities with similar problems, most notably Rio de Janeiro.
And, taking one of the cable cars in to the favelas, with the now well maintained roads, the functional and usable public spaces, it's hard not to notice the apparent mellowness now dominating the favelas, though, it also appears, the slums as I saw them in Rio tend to be significantly poorer. The favela I stayed in, for three weeks in Rio, saw multiple daily military police patrols, with shots being fired nearly every day.

But, also in Medellin, not everything is as it seems. There's a lovely park on the outskirts of town. One of the cable cars that goes into one of the favelas connects to another cable car that's outside of the regular public transport system. The long ride takes you to the middle of the huge park where in a large service area a host of well trained staff try to make you feel comfortable. Several free daily tours take you around the area, with a mandatory guide, and mounted police follow you around.
A butterfly farm is nearby and I asked how long the walk would be.
"Oh, you can't walk there! You have to take the free bus."
"Why can't I walk?"
"Well, it's not safe."
"Safe? Why is it not safe?"
"Well, there are many people that will try to hurt you." With which she was mimicking a stabbing motion.

Close to Medellin, 40 to 50 hippos are said to roam around in the wild as a consequence of two of them breaking out of Pablo Escobar's private zoo.

Related:  All the comics in Belgium

Two foods worth eating are chocolate with cheese, and a sugary caramel-like substance called melocha. The latter is prepared like dough, around pegs tied to a pole (say a telephone pole) on the street.