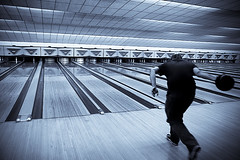 In the end, I was quite satisfied with the four days of work I spent working on the Geekcorps site. Wednesday morning, my girlfriend called me to casually let me know she had decided she was coming over and spend a weekend with me in New York, after which she was traveling to St. Maarten with me. We would then spend the last couple of days together before my heading off, after which she would fly back home.
The idea sounded great to me, albeit a trifle unbelievable, but what the heck. Life is full of surprises and this one was positive. However, we both spent the rest of the day finding a reasonable priced ticket for her and were quite unsuccessful. Wednesday evening, we decided she shouldn’t come over anyway. Being a bit crazy is quite nice. Having to pay lots of cash for it might not always be feasible. Anyway, I hadn’t set my expectations to seeing her before mid-May anyway, I was going to spend the weekend in Boston and fly to St. Maarten on Monday. Life wasn’t all that bad.

Then, due to circumstances, Betsy’s parents chipped in a significant amount for the ticket. Thursday morning she had already bought the ticket, but she was only coming to New York. I was thrilled. I had to cancel my Sunday evening dinner with Edwin, the guy whose friends I had met, by chance, in some coffee corner in New York the previous Friday. A bit of a shame, but there wasn’t much of a choice here. Suddenly I was going to have a weekend in the Big Apple with a gorgeous little lady. The kind of stuff that happens in movies and many people only dream about. A weekend like this in New York, how much more decadent can you get?
Reservations for a double room were quickly made. I had the luck I had already been in NYC a year before and knew what to show Betsy. The only thing that was still on my own list, besides spending a couple of steamy nights together, was visiting Ground Zero, the site of the now vanished WTC towers in downtown Manhattan.

My sudden departure for New York also meant I suddenly had one day less to work on the Geekcorps site. I was able to pull two late-nighters on Wednesday and Thursday and finished the site on Thursday evening, after a night of bowling with the Geekcorps staff, in a bowling alley where an amazing 35 lanes were grouped together to make for the only real family night out in the Berkshires, apparently. I scored an amazing 146 in my first round. A score that wasn’t beaten for the entire night. Not that I’m a good bowler, something that also showed while the night dragged on and the alcohol started to gain a steady influence. My previous time bowling was on an occasion, more than a year ago, when, together with the other geeks from G2, we went bowling in the exact same bowling alley.

I finished the site on Thursday evening. Then the problems began. Geekcorps had their site hosted with Verio, on a UNIX machine. There was a possibility of moving to a similar hosting plan on a Windows machine, the advantage being ASP support, the scripting language in which I had built the new site. I had recommended using another hoster However, due to several reasons, they preferred staying with their current host. On the next Tuesday, already enjoying St. Maarten rains, I still had to spend several hours trying to get the site to work on this new server, without success. And that while, without a problem, I got the site to work in several test environments from my preferred supplier. I truly hope I will be able to get the site working on Wednesday morning, only hours before we will set sail for Bermuda.

Related:  Police, women, but no boat in Rostov-na-Donu

One thing on New England I noticed time and again was that the country side looked so much like the country side in Croatia and Bosnia, when I was there back in February. Very similar rolling hills, covered in still leafless trees, empty spaces, rough rivers and small towns. The only difference being the state of repair of the roads and houses.