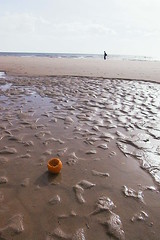 Orange on the beach 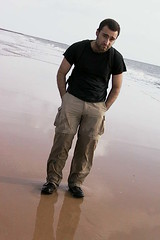 Sad on the beach 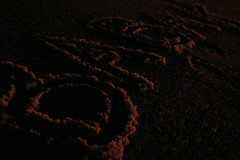 Circles in the sand 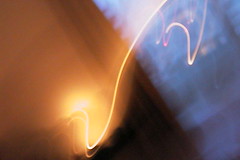 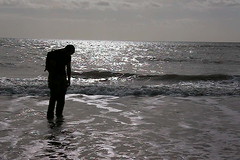 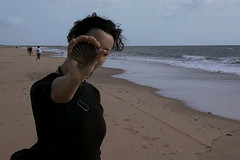 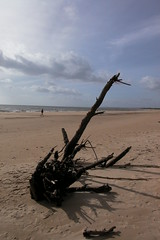 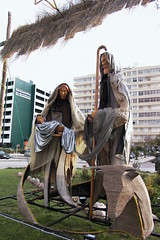 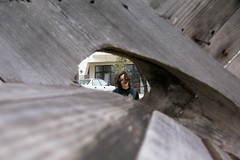 Through the looking glass 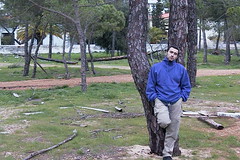 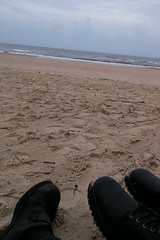 Shoes in the sand 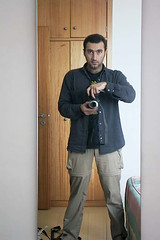 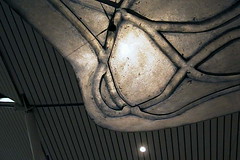 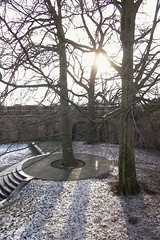 The weather became worse (or better, depending how you look at it) as the week moved on. On Wednesday, the layer of snow covering the land had grown into as much as 10cm in places. To make matters worse, I had a minor accident with my car on Wednesday, just before picking up a laptop. I had to bring the car to the garage though.

One of the managers of OGD Software, an, as you've probably guessed, software company, was so kind as to borrow me a laptop for my time abroad. However, the laptop wasn't working anymore. That is, if I could get it to work, I could keep it. Unfortunately, I couldn't., although a friend of mine, Nico, was so kind as to try to get it to work during my stay in Portugal.

Later, after returning from Portugal, Nico confirmed the suspicion I had in relation to why the laptop wasn't working. It seemed the processor hadn't been adequately cooled and broke down because of that. If anything, I now have a non working laptop to give me comfort.

Meanwhile, the tickets for Portugal had arrived. To refresh your mind, we (my girlfriend and I) were going there because we were invited by my parents. They hoped to get all the kids to go to the Algarve with them. Because we weren't sure whether Vinca would have the time to join, Vinca and I booked our tickets much later. Although we all flew on the same day, my parents were to arrive on Friday, in the evening, going back the next Friday in the morning. Vinca and I were to leave Friday morning, to return the next Friday in the evening. All in all, almost two whole days of an extra vacation, which proves that all good things come to those who wait.

Related:  Meeting the Roland in Bremen

The trip to Monte Gordo was fairly uneventful, if not very inconvenient. We had to get out of bed at 3:30am, to be picked up by a cab at 4:10. Since the cab still hadn't showed some 15 minutes later, it was a good thing that we, accidentally, had awoken Vinca's mum. She was already trying to start her car when, finally, the cab did come. At Schiphol, I was mildly surprised that after the body shop, the chocolate shop and the toy shop, they now also had a cheese counter.

Monte Gordo itself was very much what we expected of it. And we didn't expect much. The village, if you could call it that, was not much more than a large collection of gray colored concrete hotels. All menus from all restaurants where available in multiple languages. English, French, German and Dutch being just a couple of the available selection.

As these things go, to a location and a vacation style such as this, older couples flock to it as flies to a fire. At some point, to have some form of entertainment, Vinca and I played a game, where the winner would be the first one to spot a second couple of our age. After some 30 minutes, we gave up.

At the local tourist office, I asked if the new year was celebrated in Monte Gordo with some special kind of event. The reply was plain and simple: "We have bars, discos…". "But is anything organized, especially for the new year?" I tried to ask again. "Well", she said, "In Villa Real", a small but real town some 5km from Monte Gordo, on the border with Spain, "there will be a party in the street. If the weather is good." So, I asked whether she new anything about the weather for new year's eve. "Not so good"…

Although we had rented an apartment, breakfast was included in the price. Still, the fully equipped kitchen we had to our disposal invited us to go shopping for goodies. At the local supermarket we tried, a large guy was filling up his overcoat with bottles of J&B whiskey, looking at the counter to make sure no-one saw him. Strangely enough, he didn't see me, nor Vinca, since we approached from the other direction. First, I bumped into him, later Vinca. Both on purpose. Without being disturbed, he kept on filling his jacket. When later, with much difficulty, we tried to tell the Portuguese shop-owner that this guy was stealing his liquor supply, we stopped when the thief was walking past us. The reply of the shopkeeper? "Do you want meat?"

In the evening we went to the hotel my parents had booked. I asked one of the clerks what their expected time of arrival would be. "Nine o'clock. But they fly Martinair, so it could be 10, 11, who knows!" Fine. Luckily, the transfer from Faro airport did arrive at nine and we were happily united. Not a moment to soon, that is, because since Vinca had used her GSM to check the time earlier in the evening, we had arrived at the hotel an hour earlier as planned. In Portugal it's one hour earlier as in the Netherlands.

Finally for some dinner. And very soon we understood the usefulness of the fully accepted Portuguese practice of ordering half a portion for dinner. If you don't open your mouth, you get a German sized portion of Spanish food at Greek prices. After dinner, Vinca and I went for a role on the beach.
Putting the jaws together

Related:  Other places in Paramaribo

After an extensive walk on the beach on Saturday, walking from Monte Gordo to Vila Real, we all joined for dinner. Waiting, outside, for a table to free up, one of the patrons, who was Dutch and had eaten at the restaurant, just had to tell Nico that he should take the piglet. Something they normally never serve, but was truly delicious. Nico took the piglet.

And was very satisfied with it. Although staff tried to make it clear they had only one specific piece left, Nico had to get the piglet on his plate. He only came back from his decision after he bit in a piece of jaw, concluding he had already eaten an ear and an eye.

Celebrating the new year wasn't as thrilling as it could have been. Not that it was bad, it was just a little bit boring. The group simply was too divers and made it difficult to have a very good time together. Nico and Irene preferably watching some game show or cabaret on the telly, Jaap en Giso wanting to go for a (large) number of beers on the town and Vinca and I just wanting to 'go' some place together. However, some Yahtzee and Scrabble pulled us through the evening and we watched the Germans celebrate the New Year an hour early on television.