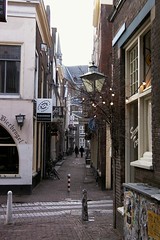 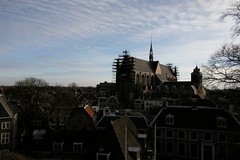 It wasn’t like I had an absurd amount of time to prepare for my months abroad. Mid November did I get the confirmation I was going to spend three months in Ghana the next year. I was to be in the US for a training Mid January. I already had planned a holiday, leaving right after Christmas, I was going to quit my job by the end of the year and I had to make sure that the company I also had set up myself was financially safe.

Then I had to get immunization shots, malaria pills, a new passport, an international driver’s license, I was coming close to publishing a book, I was busy with a webdesign project for a customer which was taking too long and to top it all off, my girlfriend demanded truckloads of attention. And who was I to refuse that?

On Wednesday I had gotten my last three shots. Right after, I went for a round of fitness, which wasn’t the most enjoyable experience of my life. The stuff that was shot in my leg felt like it started to move to both legs and my bum. Luckily the fitness center wasn’t that busy; I had the idea I was running like a cripple.

My last day at work, celebrated with a long lunch, was on Thursday. After a good lunch at a local Italian restaurant, I had to pick up the tickets for going to New York in January. When I came back at the office, I fell into a trap. My co-workers had prepared a serenade, for my leaving. I have to admit that it was very funny. Not just the guys at the Rotterdam office, but also people from Sweden and the US, who had phoned in, joined in the serenade.

Friday a christmas dinner with some buddys from university. A surprise I got into bed before 4am.

Earlier, I had tried to get a bit of sponsoring through my ‘old boys network’. I was partially succesful, securing a couple of hundred guilders in the process. My primary objective with getting sponsoring was being able to pay for a digital camera, a digital storage medium (such as a laptop) and a digital audio recorder.

The money I had received was barely enough to buy a cheap digital camera. I wanted a good one though, so I chipped in a bit of my own cash to get me a Canon Powershot Pro70 at a bargain price of $600 from a local harddware dealer. I must say I am very impressed with the camera. Even indoors the camera does good work, as you can judge from the try-outs.
Now, if only I could get myself a laptop.