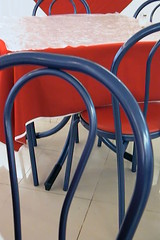 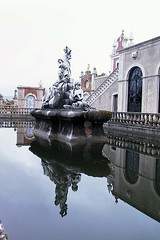 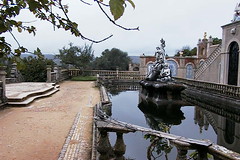 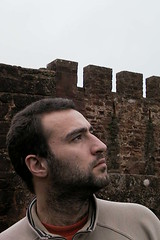 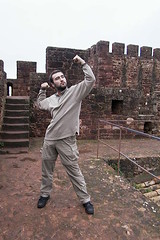 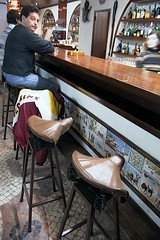 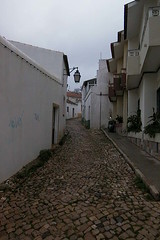 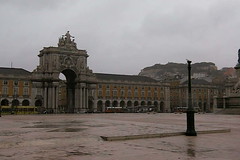 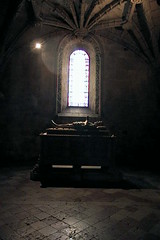 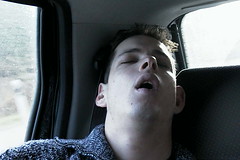 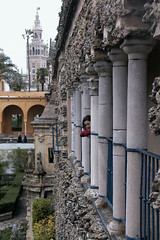 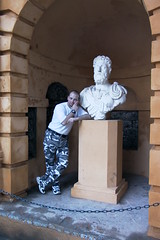 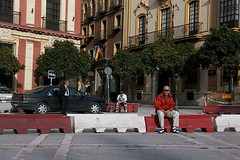 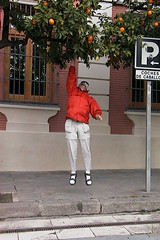 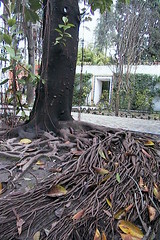 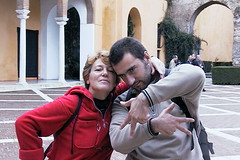 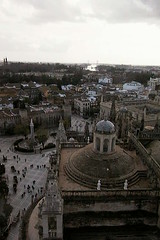 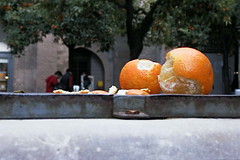 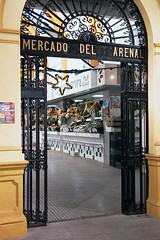 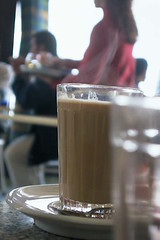 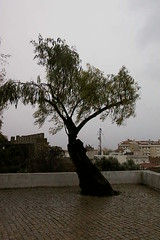 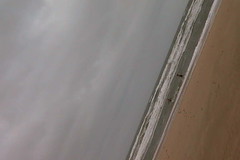 The almost obligatory new year's sea dive, on which Vinca and I also had agreed, eventually was only done by Irene en Nico. During the night a really terrible storm had set in, where Vinca and I continuously wandered when exactly the windows would finally come down from their sockets, and because of that we had decided not to dive. Although it turned out that, the next day, not only was the storm not as strong as it had been during the night, the wind was also a warm wind.

Locals, that is, Portuguese people, seem to celebrate new year inside. The streets where exceptionally empty, although many Portuguese had come from around Monte Gordo to spend the weekend at one of the parties the hotels were giving. This mainly meant eating till after 12 and then dancing, mostly to classical music.

After witnessing Nico and Irene's morning dive, Vinca and I went to the little town of Tavira, a quaint little town where we spent some time drinking espresso in a nice little tavern. You can listen to what is was like there. Giso and Jaap staid in bed, after a night of heavy drinking in the 'NOX'.

Already before we left, we figured it would make sense if we would rent a car and drive around the Algarve a bit. We expected Monte Gordo to be less than very spectacular. Something that was also confirmed by a group of travelers that was in the same van with us, being picked up at the airport after arrival. They had rented a car.

However, we were with a total of six people. Not amount that easily fits in one car. At first, to keep the price down, we considered renting a Fiat Palio. A reasonably spacious car, however not built to hold 4 people in the back. Additionally, I had had a quite interesting adventure with a Fiat Palio a couple of years ago, where the window next to the passengers seat almost without warning fell off the car. While driving. A Palio it was not going to be.

A second option was a very expensive mini van. In stead we opted for twice the smallest car possible, a Fiat Punto. Not only turned this car to be reasonably cheap, just about $20 per person, excluding gas for a total of three days. It also is a very nice car to drive. And we now had the opportunity to split the group in two, if the need would arise.

Tuesday we went for Sevilla. The double 'l' you pronounce as a 'j', so when Nico, when later ordering a piece of chicken in some restaurant ordered a 'pollo' (with the double 'l', he not only received the chicken, but you could hear staff making fun of him in the back of the restaurant.

Unfortunately, there is no highway between the Spanish-Portuguese border and Huelva, a Spanish town, some 80km after the border and some 70km from Sevilla. In stead you get a very busy secondary road, which resulted in the trip to Sevilla taking much longer than planned. The very reason why Vinca and I later in the week decided we would not go to Cordoba, another Spanish town, even further away than Sevilla. We still, however, could consider us lucky, that the very nasty looking Guarda Civil at the border didn't stop our car at seeing my terrorist-like face.

Either way, the cathedral is quite a sight and gives you a very nice view of the city of Sevilla. If it's not the biggest, it is still very impressive and also has a very interesting history attached to it. Originally, on the site of the cathedral, there used to stand a mosque, built by the conquering Mores, at the beginning of their conquest on the Iberian peninsula. When, finally after some 500 years, Christians took over from the Mores, they raised the mosque to the ground, except for its minaret, which they used as the bell tower for the newly to be constructed cathedral.

Besides the interesting history, the church also probably harbors the remains of Columbus. Probably, since although there is an impressive grave for him in the church, no one is really sure whether his remains didn't get misplaced somewhere in the Caribbean.

The other must see in Sevilla is, what is called, 'Alcazar'. A name that, even after having been to Sevilla, only can remind of the general from the Tintin comics. The guy that tries to stage a coup in some unnamed South American country and ends up as a knife throwing artist.

Large parts of Portugal and Spain were part of the Morish empire, during the middle ages. In Spain, in Cordoba, Granada and Sevilla and in Portugal along the whole Algarve, many reminders of that era still exist. One thing in which the Mores differed from most occupying forces, is that they let Christians continue them practicing their faith. Alcazar was the location where Morish and Christian nobles had their luxurious houses with very luxurious gardens.
Lisboa

On Wednesday, Nico and Irene went for a bike ride around Monte Gordo. Something which was rewarded with Nico enjoying a flat tire along the way. Although the guide, at first, stubbornly refused to believe the tire was really flat and had it pumped up several times before he finally gave in. The kids, Vinca, Giso, Jaap and myself, took one of the two cars and drove to Lisbon. Again, a large part of the journey took us across secondary roads, where trucks and busses were keeping our speed down. And to make us even more joyous, just before arrival it started to rain badly, which only finished way after we returned.

Lisbon supposedly is one of the 'undiscovered gems' of Europe and I have to admit that that seems to be true, even though we didn't have much time to explore the city, since Giso and Jaap already wanted to head back after a mere three hours.

It is a fact that the Tower of Belem, the church and convent in the district of Belem, the old citadel, the small and zigzagging streets of the old town, the largest suspension bridge in Europe and the commercial center do give Lisbon the air of a Paris, London or Rome. And one that has largely still not been discovered by tourists at large. Prices are, although slightly higher than on the Algarve, very reasonable and since, without a hassle, you get large chunks of hash offered to you in the streets, what else could you ask for? A Jesus-on-a-mountain, just like in Rio? Well, it's got that too!

Earlier in the week, Vinca and I had taken up the plan to drive to Cordoba, in Spain. However, since the trip would take us first to Sevilla, we decided not to go there. The secondary road up to Huelva would simply take too long. Earlier in the week, the rest of the group had declared that in stead of going to Spain, again, they would rather drive around a bit in the Algarve. As it turned out, Vinca and I staid in the Algarve, visiting Silves and Estoi, the rest of the group went to Ayamonte, just across the border with Spain.

Silves once was a Morish settlement but is now nothing more but a small, quaint, friendly town, not so much touched by tourism. Estoi, some 20km north of Faro, is nothing more than two streets converging but has two sights worth mentioning. The first is a totally not interesting dug up Roman ruin, for which you have to pay to see it. The second is a very neglected 16th century garden from some rich landowner. The garden is free to walk in and is quite impressive, even now, after so many years of neglect.

The day basically was a day of chilling were we spent a large part of the day drinking coffee and, later, port in several of the bars of Silves and Estoi. Not that Portuguese bars are 'cosy' in a European sort of way. All bars, cafes, restaurants and most shops too, have one or more TVs in the waiting area. Not so much to please the customers, since they don't really seem to be watching that much. If anyone, it seems to be to please the workers.

And then Friday came about again. Vinca and I had the opportunity to sleep late and spend our day doing nothing much more than chilling. The rest of the group was to be picked up at 4:30am, to be driven to the airport. Our bus wasn't coming until 3:30pm. Not that we had an easy trip back. After arriving at Faro airport, we were told that our plain had a two and a half hour delay. In the end, that turned out to be a four hour delay. To compensate us for our troubles, the airline gave us a snack voucher. The snack voucher gave us a cheese sandwich, egg on a role and a small bottle of coke. Great. But we did get to say the Lethal Weapon version of Mel Gibson!

Related:  Would you like some carnival with your new year?

Besides the not so great trip back, this type of vacation clearly caters to older couples who want to encounter as little uncertainties on their holiday as possible. They want to be able to speak their own language, they want to eat their own food. Literally, to them it must feel as if they really haven't left home.

That's also why we were welcomed in Monte Gordo by a guide from our travel organization. The very friendly lady even wanted to explain, in as much detail as humanly possible, how to use an ATM in Monte Gordo ("And then you set the language…") Of course, she also showed up at the airport. It was a pity though she didn't know of our delay before we were picked up at our hotel. Luckily enough, the bottle of whisky I had bought when flying in to Faro was still one quarter full, which gave me about an hour to relax.

Eventually we went to bed, Saturday morning at 4am. Sunday afternoon at 1pm I was already in a plane going to Reykjavik. For the first time in years I was getting a normal meal on the flight and, a first for me, the plain was equipped with LCD displays. A pity they were showing old episodes of Frasier, the problem not so much lying in that they were 'old', but that they were 'Frasier'.

After our four our delay at Faro, everything fell perfectly in to place. When I arrived at my gate on Sunday, I had still 10 minutes left to drink a coffee. I couldn't have been there any minute earlier. That is, of course, not true if I would have slept less than the four and a half hours that I did.

Saying goodbye to my Love was more difficult for me as I expected. It seems that, because of the busy weeks and months prior to leaving, I hadn't really had the time to consider the consequences of us not seeing each other for so long a time. Only when on Saturday night, we lay together in bed, after tying together too many loose ends during the day, did it slowly dawn on my what really was going to happen over the coming months. And I didn't like the prospect at all of not seeing my baby for four months at least.

Morning did eventually come around and we staid in bed just a little bit longer to enjoy each other just that little bit more. Eventually, four wet eyes later, we did manage to say goodbye for now. Just before finally getting up, Vinca asked me where her box was. "Which box?", I replied. "The box in which you will take me with you!"