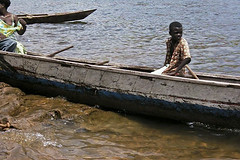 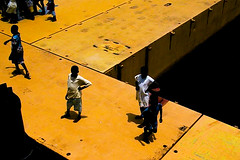 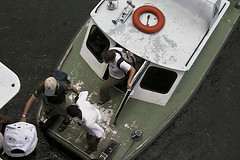 Getting on or getting off 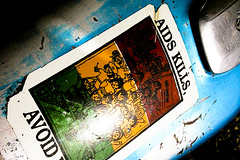 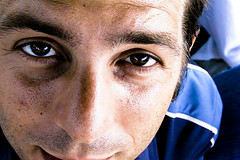 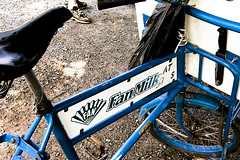 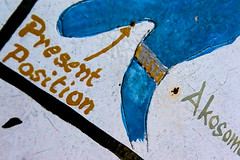 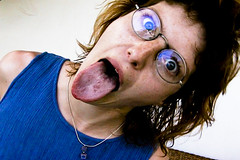 One week after our physical exercise in Lome, the geeks were back on the road. This time, for the last of three by Geekcorps organized tours. After Cape Coast and then Mole, now it was just a day trip to the Volta region, were we would spend a day on the 'Dodi princess', a boat going some 30km up the largest man-made lake in the world to the island of Dodi, from where, after an hour or so, we would leave again, heading back to our point of origin, the Akosombo dam.

The trip, by far, was the least interesting of the three. Of course, this was partially instilled by the fact that everyone, at every opportunity, took a nap when possible. This, since the previous night, we had celebrated Peter's birthday to the fullest. Originally, the Volta cruise was scheduled for the next weekend, Easter weekend. Therefore, we had rescheduled celebrating Peter's birthday from his actual birth date, the day before the scheduled trip up the Volta, to one week earlier. Such that everyone would be fresh and fit when going up the river. Because, as it turned out, on Easter Sunday the Dodi princess would not leave its port, Stophe had no choice but to prepone the trip one week, to the day directly following Peter's rescheduled birthday party. So close before the actual party, invitations already gone out, we had no possibility to reschedule the party again. I went to bed at 4am. 6:15am, we had to get up to leave for Akosombo.

Around the same time as Peter's birthday, Lura had planned to give a party too. Sensibly, these events were combined and now, could it be any better, three women, Lura, Holly, another Peacecorps volunteer, and Shawn, Stophe's wife, went all out to prepare a really great party for our birthday boy. Clearly, some of the games, passing on cucumbers and oranges made for a hilarious night.

And the Volta lake? Well, if you don't have the tendency to constantly fall asleep, the thing is very much worth it. However, you might also want to consider going all the way up the lake, instead of the short trip and back that we did.

Although it took a while, my near future is also starting to get more and more clear. Originally, I had to choose between two equally interesting options. One was flying back to the States on the ticket that Geekcorps had supplied me with, then travel to Miami, where I would board a sailing boat of a friend of mine after which we would sail back to Europe. The second option was traveling back, overland, to Europe from Ghana.

At first, traveling back overland was the option favored by me and since the South-to-North border between Mauritania and Morocco had very recently opened up, this truly seemed like a possible solution. However, although the costs of traveling around in West Africa are reasonably acceptable, the actual time and difficulties involved make for a grueling trip. The quality of the roads, the 'friendly' border guards, the long trips between cities and the geographical dispersed places of interested make a trip back to Europe, overland, only interesting if you have several months at your disposal. That seemed to much to handle for me, at least for now.

Related:  Travel in the time of COVID

So I had slowly drifted in favor for the other option, sailing back to Europe from the US. Then, I received a phone call from my mum, saying she had received a letter from my bank, threatening to close my account amongst other things. It was clear, I had made a mistake in my financial calculations before leaving. I was out of money. No more traveling, after Ghana it was straight back to Holland, to find a job.

And my friend, who needed the extra crew on board to sail back to Europe? Well, the setup was this; the boat is his father's, but he doesn't feel like crossing the Atlantic with it. Them both sailing around in the Caribbean, his father had come across some local babe with whom he had decided to stick around with for a while. The boat was going to stay in the Caribbean with my friends father, my friend was going to fly back to Europe.

During our first week in Ghana, CNN visited us for some IT show on the digital divide. For some reason, they very much liked the idea of my working at a radio station and, just like the people from PBS that stopped by some weeks later, CNN came to JoyFM and interviewed myself and some of the employees there. Including Cyril, the manager of JoyOnline who left after my first day at work.

I later found out that Geekcorps (and me working at JoyFM) had been on CNN in two different shows, the second one, called Business Unusual only airing the 22nd of April. The first show I never tracked down, although many of the whites in Accra told me during this week they had seen my face and me being interviewed a number of times on CNN. My 15 seconds.

Related:  Getting shot
This text is available under a cc-nc-a license.