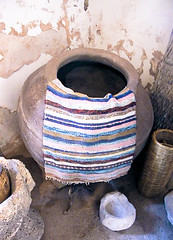 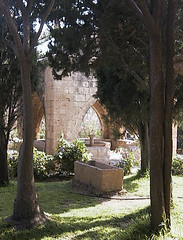 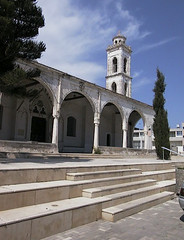 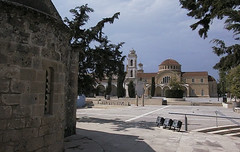 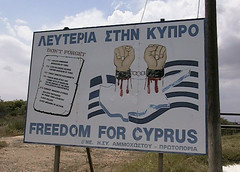 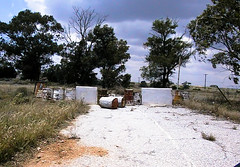 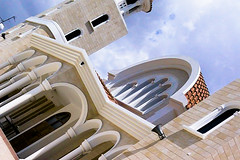 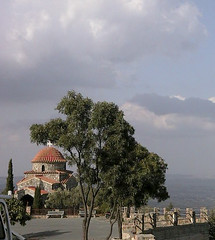 The next day we kept the scooter and drove to Pyla, the only city in Cyprus where Turk and Greek Cypriots still live together and. After Pyla we drove all the way to Deryneia, where it’s possible to view one of the country’s ghost towns, occupied by the Turks, departed by the Greeks.
Pyla, close to Larnaka, is a strange anachronism in Cyprus. In the middle of the town, there’s a UN border post, with a guard, who’s keeping an eye on everyone in the town. On the one side, Turkish coffeehouses, on the other, Greek coffeehouses. It seems nothing is really bothering the people in Pyla, the country’s division the least, but who knows. Above the town, on a ridge, on the Turkish side of the island, a Turkish border guard keeps track of what’s happening in the town.

The island is divided by what is called the ‘Green Line’. The line was drawn by a British official, on a map of Cyprus, with a green pen and divides the country into a Turkish side and a Greek side. Along the whole of the line, it’s forbidden to take pictures and every 500 meters or so, three border posts make sure you don’t (but of course, we did).

Driving to Deryneia, we drove past another ghost town. Already from far away, it was possible to see the gloomy dark church tower of the town of Ahna and only when we came closer (because the main road was going close past the town), did we notice that all the houses were abandoned. The main access road was blocked by fuel cans, walls, mines and a sign saying that you would probably be shot if you tried to cross. We decided not to try and moved on.

Related:  Once rose from the sea

Deryneia was much less interesting than Ahna. Although many people try to make a living by hosting viewing platforms into the deserted town of Varosha, the abandoned houses are much further away from the viewer than the houses in Ahna. Although what is interesting is that, in the distance, you can see the former largest port of the island, the now occupied Famagusta.
Deryneia was the subject of international upheaval, as short as 6 years ago. Two Greek Cypriots were killed in fights. The first victim seemingly was beaten to death for no reason whatsoever but being in the wrong time at the wrong place. The second guy, a good friend of the first, was so stupid as to climb the flagpole with the Turkish Cypriot flag. Of course, he was shot down. The first guy was plain unlucky, the second guy was plain stupid.

A colony of tourists

Before heading to Agia Napa, the tourist colony of tourist colonies, we drove to the quite pleasant town of Paralimni and already got some hints of which tourists mostly flock to this area of the country. Deli’s, Irish pubs, English restaurants filled the town center of Paralimni. Besides that, the main feature of the rather quiet town are the Agios Georgios churches, a new and an old church, devoted to the same saint.

Agia Napa is terrible. Although only some 2500 people live in the town, it’s filled to the brim with tourists, mostly young people looking to party. The large tourist strip as well as the town center are filled with Indian, Chinese, French, Russian, Italian restaurants and more. Bars of all sorts and clubs complement the party scene.
Luckily, for the culture buff, there is something that is of interest in the town. The highlight of the monastery, built around 1570, is the fig tree in front of the main entrance, said to be 600 years old.

Related:  No pain no gain
This text is available under a cc-nc-a license.