Looking out over Hoan Kiem lake 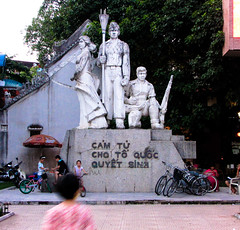 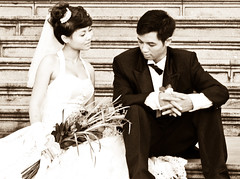 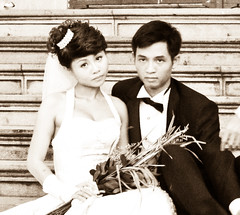 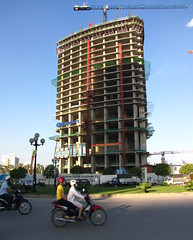 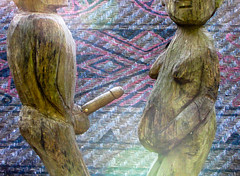 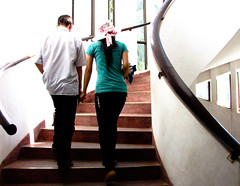 Couple going up and down 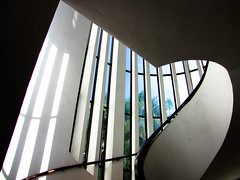 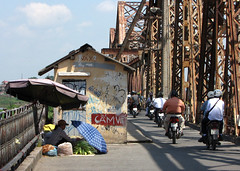 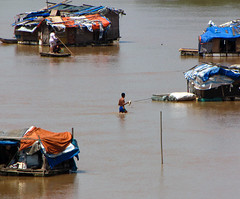 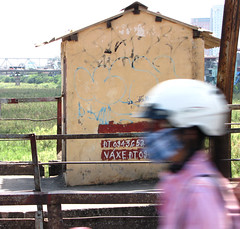 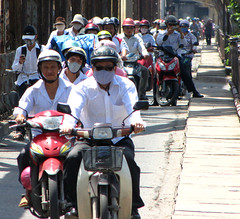 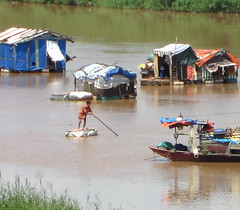 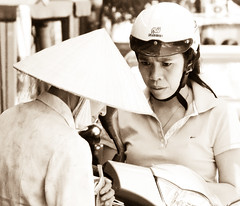 What look is that? 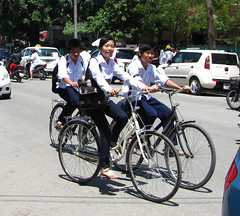 Three on a bike 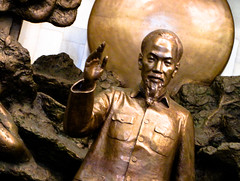 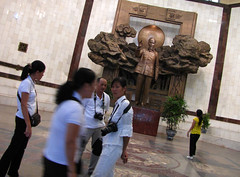 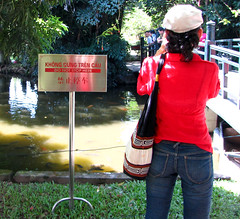 Do not stop here 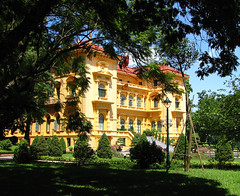 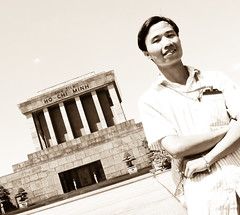 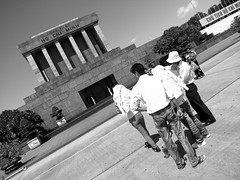 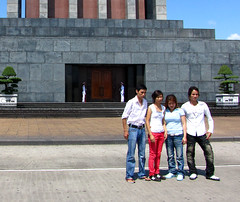 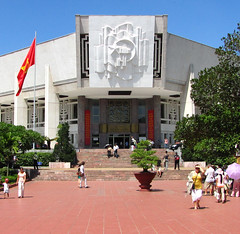 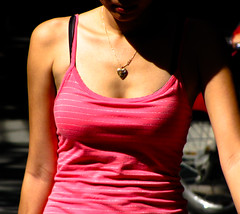 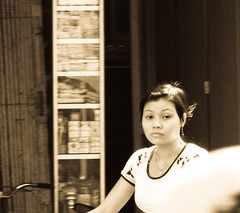 A few weeks back I was offered a free tour guide from OurExplorer.com, at a location of my choice. The website allows you to book local guides for your travel destination and though the concept is sound, I found the website left a few things to be desired, though that, in turn, might be in part because I primarily use Safari, not IE or Firefox.
Obviously, OurExplorer.com offered me the guide in the hope that I would write about it glowingly.

Anyway, with my upcoming trip to Vietnam, I figured that getting a guide in either Hanoi or Ho Chi Minh City would be the obvious solution. I suggested a few dates, and I ended up with Tony, a native Vietnamese who was going to show me around in Hanoi for a day. I suggested starting at 10am, wanting to not rush myself too much, but Tony preferred starting earlier. We ended up meeting at 830 in the morning.
I presume Tony was getting paid through OurExplorer.com, meaning that, for him, there was no compelling reason to make himself look better, besides the usual ones. On top of that, Tony isn’t a full time guide, running an outfit called indochinaguides.com. So, not having all his eggs in one basket, I’d think that what I was going to get was pretty much a typical day of guiding through Hanoi.

The day of my arrival, I found out that Ho Chi Minh (Ho the bright and intelligent one, I was told by Tony) his mausoleum closes in the late morning, making the early start which Tony suggested a very practical one. Notwithstanding the fact that for unclear reasons, the mausoleum was in fact closed when we arrived. For the day, yes, but it seemed to be more structural. Perhaps the body was sent to Moscow for renovation early this year.
On the flight from BKK to Hanoi, I met a Slovenian guy, who asked to join my tour of the city. I agreed, though eventually this resulted in Tony acting as a personal interpreter for the Slovenian on some of his errands. Kudos to Tony for helping out, but it also inflicted our touring schedule.
After a quick breakfast, Tony and the Slovenian went off to get a second bike to drive around town with. By the time we left, it was 10am. A good thing we started at 830. Tony, good man, arrived more than in time, but had a hard time finding my hotel too, like I had the previous day. Though for different reasons. Turns out that down the road, there’s another Especen owned by the same family and, just a tad further, yet another Especen, but a total copycat. That’s one for the intellectual property lobby.

Besides the mausoleum, the Ho Chi Minh museum has rather extensive and not unattractive exhibits on Uncle Ho’s life. Though Ho never married, there are unsubstantiated reports that he, while being a chef on transatlantic ships, might have had relationships and kids in one or more ports of call, meaning that there might be a few Nephew Ho’s running around the globe somewhere.

Related:  India vs. Pakistan vs. Baba

The nearby one pillar pagoda is a bit of a downer. It’s a small pagoda on a big and not too high pillar. Tony agreed, as he forgot to walk past the pillar, which is close to both Ho’s mausoleum and his museum.

After Ho’s legacy, we drove past Ho Tay lake and drove up to cross the Red River using a bridge constructed by the French in the early 1900s. As this was the only bridge crossing the river until after the reunification, the Americans often tried bombing the bridge into oblivion, but the locals were always quick enough to restore any of the broken parts. The bridge is rather long and looks rickety, only giving access to bikes with an added train track in the middle. Cars are not allowed on this bridge, but up to the early 1990s, cars were still exceptions on the roads of Hanoi.
Ha Noi actually got its name because of the river. Ha Noi means the ‘land between the river’, that is, the Red River.

Following the bridge, Tony brought us to a typical Vietnamese eatery because it 1. Served typical Vietnamese food, 2. Was good, 3. Was cheap. Hard to argue with that.
When asking what we wanted to eat, I replied that he should choose, but he initially had a hard time doing so. The only thing he wanted to be sure of was wether we were interested in drinking beer. The restaurant served tankards of nondescript beer which kept on coming. The place itself, a huge one room stable, while rather efficient, clean and hectic, was packed with customers, locals only.
The food was indeed quite good, particularly one tofu dish with mashed up tomato and peppers, and not too dissimilar from Thai food. Surprisingly, not only was the food significantly less spicy than Thai food, we also didn’t order rice to accompany the lunch. And though Vietnam is one of the three largest exporters of rice, and rice is more common than air, well almost, Tony looked at me quite funnily when I suggested ordering rice.
Then again, with our evening meal, rice was apparently back in fashion again.

I had actually wanted to eat dog but, we were told, as today was the first day of the new lunar month, eating dog was considered unlucky. Sadly enough, without the local knowledge of where to get it, I was unable to eat dog for the rest of my stay in Vietnam.

We took our time for lunch, as many places, shops and museums, close down between roughly twelve and two in the afternoon. The southern Viet, as that is what Viet Nam, from a Chinese perspective refers to, go for a two hour lunch and siesta break. Given the freaking heat, this is not unreasonable.

After lunch, Jona drove off, eventually taking an hour to find his way back to his hotel, and Tony and I went to the Vietnam Museum of Ethnology, after having an excellently bitter ice coffee in some tucked away coffee shop, which describes many of the no less then 55 individual ethnic groups in Vietnam.
At the museum, a water puppet theatre was also being staged but though the water puppet theatre in town was packed to the brim with tourists, the showings at the Ethnology museum were sparsely attended.
Though ethnology isn’t the most sexy subject, the museum is put together quite well, with excellent explanations in both French and English as well as Vietnamese.

Sipping coffee, I reflected on the handsome maidens, deciding that the girls on the street are surprisingly pretty and seem to be more curvy than many Thais. Many also seem to have Chinese ethnic influences.

Following the museum, we drove around town, starting at one of the city’s universities, where Tony had learnt for teaching English, which surprised me a bit since although his English is quite decent, his pronunciation left some things to be desired, for example him struggling with the difference between a ‘p’ and ‘f’. Then again, this is a classic issue for quite a few peoples, not the least native Arabic speakers, to name but one group. Perhaps the Vietnamese have no letter f?
We followed this up with a visit to the New Urban City in the My Dinh area, where huge skyscrapers, including a future 80+ story monolith are in various stages of completion.

Afterwards, driving through the French quarter, we finished with a drink on a rooftop bar overlooking Hoan Kiem lake, watching the sun set over the city, following it up with dinner at Little Hanoi, a small restaurant in the old town, where I had licorice chicken with french fries…
As in several places, I’ve now noticed, beer is only marginally more expensive than sodas and cheap in general. At Little Hanoi, beers started at 12000 Dong, just under 50 eurocents.

The day was good, though perhaps a bit chaotic, primarily due to the errands my Slovenian friend wanted to run. However, Tony is quite a knowledgeable guide, clearly not only knowing his stuff about Hanoi, but also other places in Vietnam. I suppose not too surprising, for someone who runs a travel agency. However, I’m a sucker for good stories, and could have done with more anecdotes and unprompted background information.

Near the end of the day, watching a newly married couple having their picture taken near the Hanoi opera house, I finally suffered from scooter burn, a nice hole in my leg due to touching the exhaust pipe while riding on the back of someone’s bike. In Chiang Mai, it’s not hard to see scores of, primarily, girls, with these nasty patches on their legs. Luckily, most more expensive bikes have insulation around the exhaust. Though, not the one Tony and I were riding today.
There are surprisingly large amounts of scooters on the road. Though I thought it nice and quiet in the morning, it was heavily packed with crazy drivers from the early evening onwards. And with so many chickies in little but the shortest hotpants. All properly wearing helmets, apparently since half a year or so, when the government started enforcing this particular law.

The city feels more like a crowded and upsized version of Phnom Penh than something like BKK, Chiang Mai or even Vientiane. The city is rather chaotic and has clearly grown without proper restrictions and regulations. However, I could see that the introduction of the New Urban City could work as a long term plan for alleviating the old quarter, potentially luring inhabitants of that area to the posher and nicely managed suburbs, leaving room for the potentially booming tourist industry downtown.

Tony reminded me of my Chinese friend Wong, sharing a series of physical traits, including his table manners. When I subtly suggested to Tony that I suspect a stronger Chinese influence, here in the north, as compared to either Laos or Cambodia, Tony categorically denied the possibility.
The Vietnamese are not too fond of the Chinese, primarily due to the thousand years of occupation which roughly ran through the whole first millennium. Nevertheless, the temples and many of the memorials are, at least to my eye, indistinguishable from Chinese counterparts.

An excellent day out. Tony’s regular fee is 50 dollars for a day. I’m not normally one for taking on tour guides as I’m quite convinced I can arrange my own sightseeing, but when you’re with a small group and short on time, this could actually be worth it. Perhaps not so much for visiting the standard tourist sites, but more so for visiting more offbeat locations and local restaurants and bars.