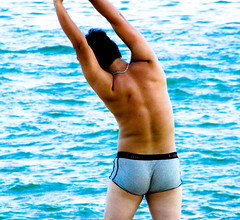 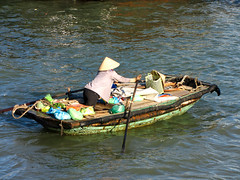 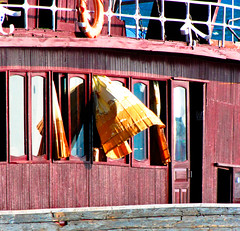 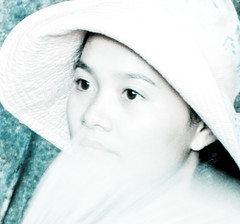 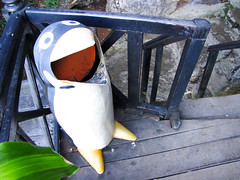 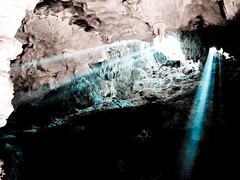 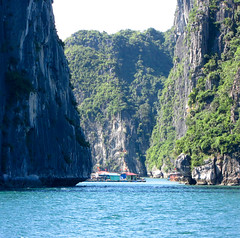 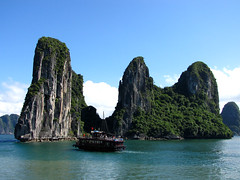 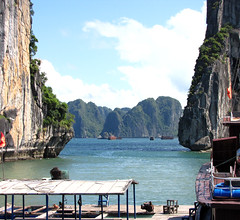 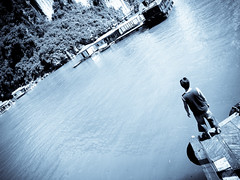 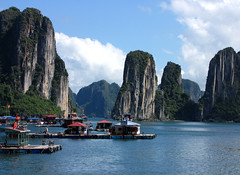 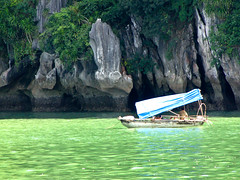 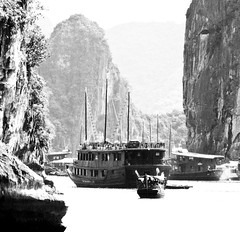 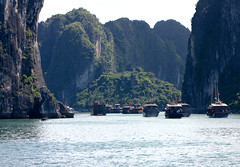 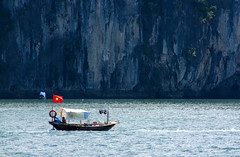 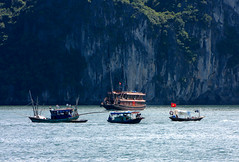 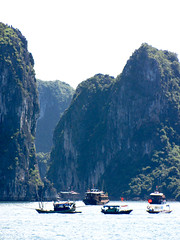 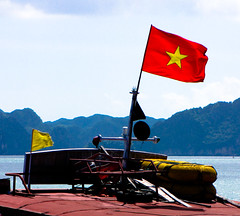 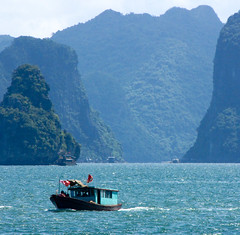 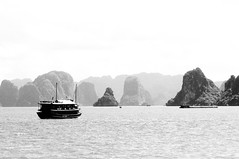 The karst mountains in the distance 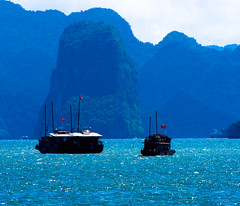 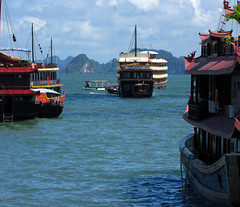 Making a run for it 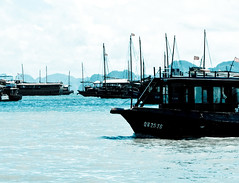 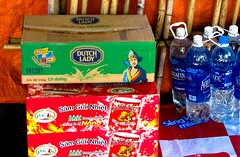 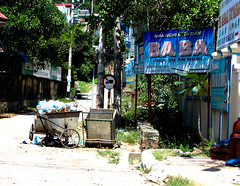 When I booked my trip to Vietnam, I had originally planned to really only go to Hanoi and Saigon (Ho Chi Minh City). However, slowly, slowly, I started to get less certain of that plan, wanting to see more than just these two cities.

Halong Bay, full of karst islands jutting out from the sea, is supposed to be a beautiful corner of the world, a three and a half hour drive out of Hanoi. As I also wanted to visit Hue and, possibly, Hoi An, a two or three day trip was really out of the question, but a one day trip to Halong Bay was possible.
However, when I came back in the evening, the seven hours I had spent on the bus was a bit much. A one day trip to Halong Bay is too much of a pain, though beautiful the islands are.
Karst mountains are soft rock which, over millennia, have withered away due to erosion, leaving slightly harder rock standing. Not at all unlike Meteora in Greece, which I visited in 2003.

I was the first to be picked up for the trip, a total of 20 people or so sharing the bus to Halong Bay, combining those that were going one, two and three days. Surprisingly many Frenchies, as well as east Asian tourists, not just on this trip, but in Hanoi in general.

The jumble of architectural styles I encountered on the way to Halong Bay is decidedly odd. Small French hamlets pop up in the middle of nowhere, alternated with Chinese kitschy villas, alternated with native bamboo huts and sheet metal dwellings. Then, it seems that extra points go to those who build the narrowest and the tallest.
Surprisingly many of the newer houses have domes on top of their rooms, not a few in Rococo style, some even gilded, others more modern, made of glass and in pyramidal shape.

Though pretty, you can have too many fluorescent green rice paddies and, when finally arriving at Halong Bay, the cool breeze coming in from the sea is a very welcome refreshment.

According to legend, the karst formations were created when a dragon, wagging his tale around during a chaotic flight from inland Vietnam, became a bit too careless, smashing up the shoreline and leaving the islands as they are now. The islands, though undoubtedly pretty, were not as impressive as I expected them to be.
Scores, perhaps hundreds, of identical junks litter the harbor of Halong Bay and its waters and most are part of organized tours. We have lunch, on the boat, in between the islands, rock formations towering over us. The lunch is had mored to one of the floating houses in the bay, where the local families will try to sell you the freshest fish and shrimps possible, still alive in their pens. I found the fish a bit too pricey, the bargaining starting at 200.000 dong per kilo, some 11 dollars, but the huge and, as I found out, extremely delicious shrimps, came in at 60 dollarcents each. A bargain, and only requiring a little bargaining. Lunch is included with most trips, but purchasing a few extra fishies or shrimps is definitely worth it.

Also part of the tour is a visit to one of the caves inside one of the islands. Yet another collection of stalagmites and stalactites. The dustbins in the busy cave, in the shapes of dolphins and penguins, felt a bit out of place. As did the gentleman who, in the middle of the cave, was manning a desk labeled “Desk for appraises”.

Related:  Just before take off

On the boat trip, they’ll try to sell you pearl necklaces in all shapes and sizes, but wait with buying until you’re back on land. Competition there will be fierce.