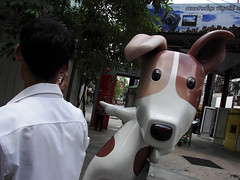 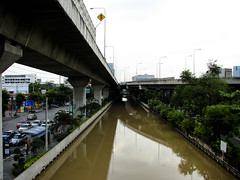 For my flight from Tokyo to Bangkok, my boarding card contained four Ss again. Indeed, now at the gate, I was asked to step aside, but now the additional check, at the boarding gate, was superfluous. Though that was only because at the baggage check, some of my stuff had already been taken out for an extra pass through the scanner.
As opposed to the last time, I had to stand in line with five others to be rechecked. All with the four Ss on their boarding cards.

Stepping out of the airport to wait in line for a taxi, distinctive Thai food smells wafted in my direction and I couldn’t help but smile.

At the moment, Thailand is facing some political turmoil. For months, anti-government protests have been going on and the day after I arrived back from Tokyo, the government declared a state of emergency.
There had been talk of strikes and I wasn’t sure if I’d be able to get to Chiang Mai.

Train tickets were being sold and though the train was nearly empty, it ran nicely on time. I arrived back in Chiang Mai, tired, but content.

Within thirty minutes of my arrival, Vlekje walked in the door.

Related:  Tigers and flat tires
This text is available under a cc-nc-a license.