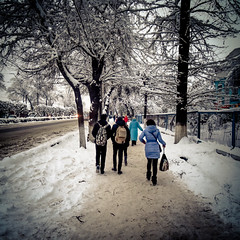 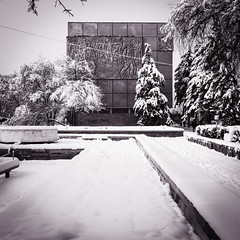 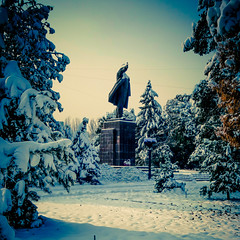 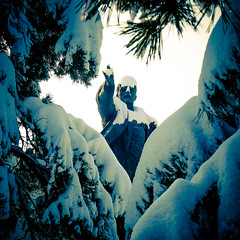 Lenin through the trees 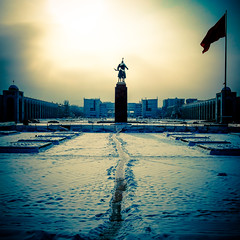 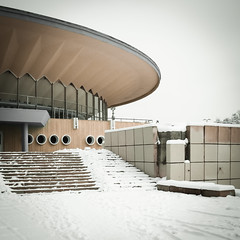 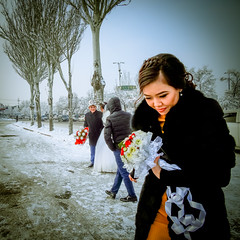 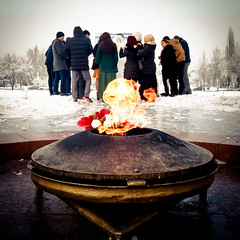 In front of the fire 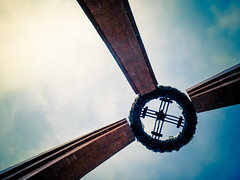 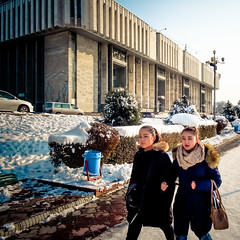 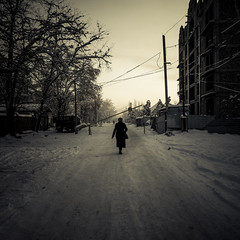 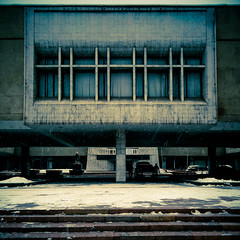 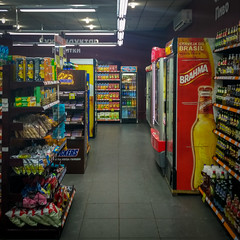 Not an old town, Bishkek didn’t exist 150 years ago, and, during the Soviet regime, was named Frunze, after a locally born Russian civil war commander, whose Bolshevik forces seized Khiva and Bukhara in 1920.

Kyrgyzstan, and the central Asian states in general, should really be visited in summer, as the wide open landscapes and rough mountain ranges, that is, outdoor life, is what really is the attraction, less so the Soviet era cities.
But, with, recently, Kyrgyzstan’s visa regime opening up, and my visits to the old continent getting rarer and rarer, I figured it sensible to take the opportunity now, as opposed to waiting who knows how long for another chance at finally visiting Central Asia.

Uzbekistan, Tajikistan and Kyrgyzstan have their borders meet like in a whirlpool, right in the Ferghana valley, a consequence of Stalin’s divide and rule policies. Now, relationships are quite tense, made worse by the fact that Kyrgyzstan is host to three enclaves of two countries.

The politics of the closely connected countries conjure up parallels with the Caucasian countries and, perhaps, the former Yugoslavia. In Kyrgyzstan, the first post-independence president came in as a reformer but, also after dealing with an Uzbek Islamist insurgency, based in Tajikistan, oversaw a government that slid back into nepotism and corruption.

Then, with the 2005 Tulip revolution, he first fled to Kazakhstan, then Russia, where he became a lecturer.

Five years later, his successor, accused of similar practices, also fled the country after riots broke out, eventually ending his journey in Belarus. Now, a woman leads the country, but not after even more riots broke out when the Uzbek population felt they were short changed with this handover of power.

Related:  On the road in Mongolia

The Kyrgyz flag perhaps looks more like a corporate logo than a traditional flag. Representing the inner vent, the tunduk, of a yurt, or Ger, the fourty flames around the edge representing the fourty tribes of the Manas epic. Forty, kyrk in Kyrgyz, is also the source of the name of the people and language.
The Manas epic is a long story about a warrior who secures land and rights for his people against unlikely odds. Twenty times longer than the Odyssey, the story was only first penned down in the mid nineteenth century and is still also communicated orally, by bards, or Akyns, in exactly the same way Homer’s stories were handed down from story teller to story teller, with the best being able to improvise new story lines on the fly.

I suppose it’s tempting to see a connection between the Greek epics and this Kyrgyz story, but, the central Asian story appears to be much younger, by the Kyrgyz themselves estimated at a little over 1000 years old.

Arriving at the airport was a bit like tumbling into a flashback from the past: Military costumes resembling those from a Soviet past, border guards wearing caps taller than the span of a hand. Immigration seemed smooth enough, until I was taken aside for questioning, although that seemed more, eventually, about the incomprehension of someone coming to Kyrgyzstan as a tourist, in winter.
And, stepping out of the airport, I understood why. It was 16 degrees below zero.

Bishkek feels more like a very large village, and everything covered in snow made it quite appealing. Very few buildings over even a few stories high while my guesthouse, very much in the center, is one of many single story houses, freestanding, that simply seems to have grown over time, from a makeshift wooden core to a small agglomeration of a few buildings, surrounded by a wooden fence.

Prices are pleasantly low. A bus ride on a decent minibus is 15 cents. A large stuffed bread roll on the street is 45 cents.

It’s very easy to compare the city to Ulaan Baatar, the capital of Mongolia. Similar architecture, built around the same time, wide avenues with similar Soviet style apartment blocks, statues everywhere, boutique restaurants still charging low prices, alternated with communist cafeteria leftovers.
One of the latter is the basement cafe in one of the theaters. Done up pretty much as you would expect a communist era cafe in the basement of a theater to look like, not having changed in the last 30 years or so, with blue aproned babushkas busying themselves serving your food.

Here, in comparison with Ulaanbaatar, the mountains are further out, and the city is perhaps even sleepier. But, the blanket of snow muffling all sounds probably helps.

In the countryside, Kyrgyz and Mongol don’t dress alike, but both live in gers, yurts, value horse races and archery, and play the horse head fiddle.

Bishkek is a flat city, multiple places rent out bikes, some at unreasonable, some at reasonable prices. In summer.
In my guesthouse, a Japanese round-the-world cyclist was surprised by the sudden and early arrival of winter. He’d been waiting 10 days and now planned to fly to the Philippines to make his way back to Kyrgyzstan by next summer.
I could have sworn I’ve met the guy before, he’s been going for six years.
Or is it that all Japanese cyclists look alike?

Change is in the air

Related:  Castro, the capital of Chiloe

In Kyrgyzstan, too, the times they are a changing. One of the enjoyable aspects of living in Budapest in the late 90s, was that stage plays, operas, musicals and classical concerts were pleasantly cheap and good. And popular.
In Budapest, not so slowly, prices have crept up. Still cheaper than comparable shows in Western Europe, but not by too much. Ascension to the EU and being so close to hordes of tourists with money as well as inevitable market integration have driven prices up.
Here, in Bishkek, however, prices for live stage plays are still ridiculously low, and the shows good. Though not popular. I went to a stage play of Don Juan, assuming it was going to be an opera. The theater had seats for perhaps some 500, yet only 50, at most, were occupied. On a Friday night.

Later, I did go and see Figaro. I went down to the wardrobe to leave my coat.

The bar was selling local cognac as if it was 1979.