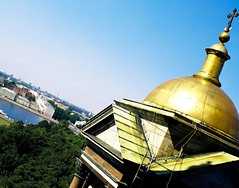 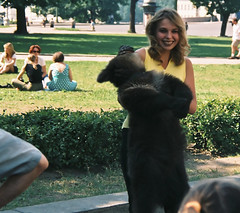 That's one dangerous mofo, and then there's the bear

The gulf of Finland 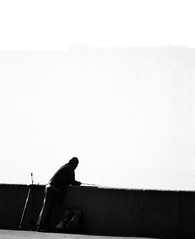 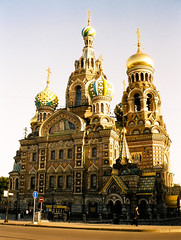 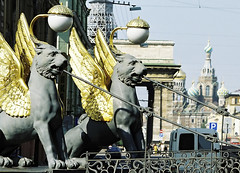 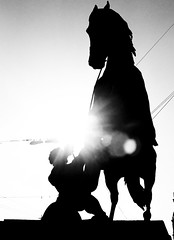 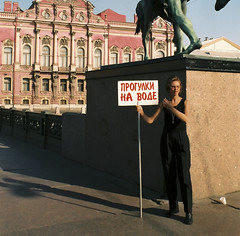 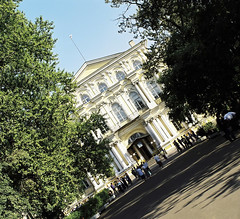 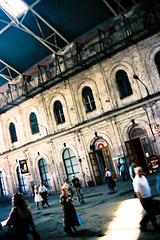 I started to like the city so much, I figured I was going to come back in Winter, doing a tour of the Baltic states (which I did), and possibly rounding the Gulf of Finland and then coming back to the Netherlands via Helsinki and Denmark (which I didn't).

The next morning at breakfast (which was included in the price of the hostel), an older man (maybe about 70) was also having breakfast. American, he was also staying in the hostel. He constantly reminded me of Dennis Hopper, talking exactly the same as Hopper in Easy Rider and Apocalypse now. I wandered if he was on a constant high. Still, I was quite impressed by the guy being here, him being not so young anymore and even having some trouble walking 'normally'.

During the day, I visited the Alexander Nevsky monastery. A popular place with locals and tourists. Two graveyards (for which you have to pay, separately, to enter) house the graves of a whole bunch of well-known Russians. The church houses regular and very impressive services. When I made some audio recordings there, trying to conceal my recorder as much as I reasonably could, quite fast, a monk came up to me, ordering me to stop the recorder immediately.

What intrigued me most, though, was the dot matrix clock on one of the church walls.

Almost every book on the market about traveling in Russia warns you for not changing money on the streets. Up to here, I had always closely monitored my money and changed at kiosks where possible. The only exception being Novosibirsk, where I ended up with wads of 50Ruble bills (but the correct amount).

Related:  Death of a queen

Prior to getting my train ticket, I needed to change cash. I was waiting at an exchange desk inside the train station when a man came up to me asking if I wanted to change money. I thought about it, remembered the warnings and thought 'what the hell'. I lost $40.

Afterwards, it was obvious to see what happened and that the whole trip had tired me way too much to be alert enough to understand what he was doing. First we agreed on an exchange rate, then I showed him the dollars, then he showed me the Rubles and counted them out. He gave them to me, but right after giving them, he said he had made a mistake and needed them back, to recount. That's where I made the mistake and where I should have quit. And I knew it, but I was just too slow.

Anyway, right after taking the money back recounting it and handing it back to me, the 'police' came, the asshole ran off and I was reprimanded by the 'police' for exchanging money on the streets. Of course, I was some 1000Rubles short, the exchange person taking it out just before handing the money back and the 'police' coming over. Thing was, the first guy was skinny and small, the 'police' two heads taller then me and much, much stronger. Making a fuss wouldn't have helped at all.

Oh well, I guess you could call it 'tuition fee'.

I had to choose between a train ticket to Warsaw or Minsk. Warsaw was some $55, where Minsk was only $20. The choice was obvious, although it also meant having to get another ticket in Minsk for getting to Warsaw again. I was going to take my chances.

Its hard to visit a stage play in summer. Most theaters have their summer breaks, not showing anything. Generally, the only shows that are open during summer, are the shows especially for tourists. Of course, they are also much more expensive then the regular shows. I was lucky however, and visited a ballet showing of the 'Nutcracker suite' for about $4. Regular tickets were already sold out (then again, I did try to buy them on the same day as the showing) and the only tickets left were the very exclusive ones at $12 a piece and up. I figured I would try my luck some minutes for the showing, to see if anyone was willing to sell regular tickets (at higher prices of course). There was, although only one person, an older lady trying to get rid of two regular tickets. I only needed one, so it took some haggling to convince her of selling me one, instead of two tickets, but I succeeded. And hey, I only paid about three times the regular fee (of $1.20).

Back in the hostel, I talked to the Australian couple whom I now shared a room with. They had been traveling for a year and were not even close to finishing. It surprised me how many people apparantly are traveling all over the world, and are taking so much time to do so. In the hostel I also talked to Gorge, a Mexican guy, who had now been traveling for 7 monhts, and had only covered a part of Asia, Budapest and now St. Petersburg. Definitely he kept my prejudice against Mexicans alive, by taking alot of time in going from one place to the next. He was already staying in St. Petersburg for two weeks, doing, at most, one 'thing' a day. Still, I found it very interesting to talk to all these travelers. There's so much to see and do in the world.

Related:  Training
This text is available under a cc-nc-a license.