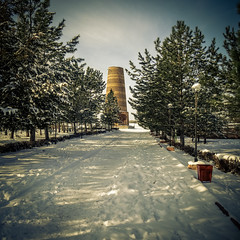 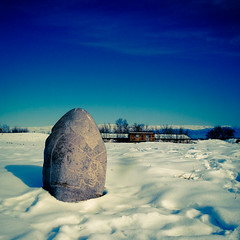 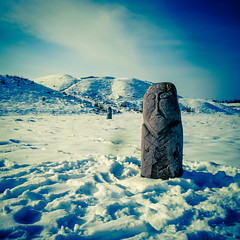 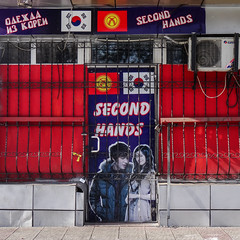 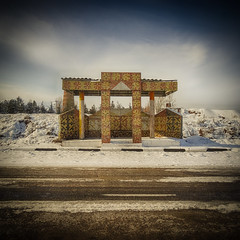 Central Asia was quite empty when the Russians finally settled on a detente with Great Britain, winding down the great game, with Afghanistan as a buffer state, and the reason why, in Afghanistan’s northeast, there’s a sliver of land touching China, making sure that Russia and Great Britain would never share a border.
Stalin, with his devide and conquer mentality, resettled peoples from all over the Soviet Union in Central Asia, and shuffled the Central Asians around, too. One consequence was that plenty of the cities in Central Asia are new, that is, less than 200 years old.

Tokmok, some fifty kilometres from Bishkek, is no exception.

But, on the outskirts of Tokmok, there’s the Burana tower. Once a 47 meter high minaret, the only thing left of the Balasagun citadel, founded by the Sogdians, whose most famous progeny probably was Roxana, the infamous bride of Alexander the Great, who ended up giving him a baby, though both mother and child were murdered in the power grab that followed Alexander’s death.
The minaret, now significantly smaller, is a Soviet reconstruction, though the nearby Turkic, pagan, stone totems are originals. Also original are the few artifacts in the onsite museum, including Buddhist, Christian and pagan art.

Perhaps the most interesting archeological finds are no longer there, tucked away in either the bowels of one of the state museums in Bishkek, or long ago moved to Saint Petersburg or Moscow; rare Scythian artifacts from the nearby valley.

It seems I’m statistically more likely to be stopped and questioned at border crossings, specifically in the west.
Typically, one advantage of being in more eastern countries is that I’m less obviously seen as a foreigner, an outsider. The hallmark of this, when locals start asking me for directions. The surprised look when they realize I’m not local is a small form of entertainment.

But, 2016 is special. I was snacking on the love-child of a shawarma and a hamburger in the central market of Tokmok, when undercover police took me aside. Perhaps because I neither packed razors nor clippers and my beard was starting to get unwieldy, but, an uncomfortable discussion in broken Russian and English showed they thought that, perhaps, I was a Syrian terrorist come to blow up the market.
Eventually, I was escorted off the market, to the central police station, where, carefully but thoroughly, I was patted down, local law enforcement assuming I might be carrying explosives. Was I there to bomb the market?

Finally, someone who spoke much better English than I speak Russian was brought in, tension eased, and we smoked the last of my cigarillos.
I was free to go, but not before the 24 year old that first stopped me took me out for lunch; a rather awesome lightly fried mantu. Which I had to pay for, of course.