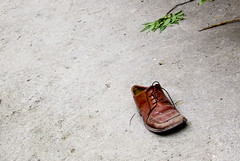 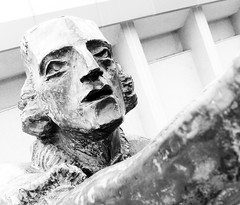 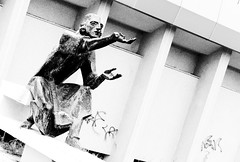 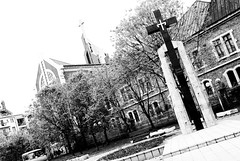 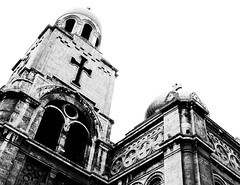 Unfortunately, the weather deteriorated quite a bit. In the morning, we could have gone out without a shirt, if we would have pushed it a bit. But in the afternoon, I felt sorry for not bringing a sweater with me.
Betsy, meanwhile, is recovering from the acute flu she suddenly came down with last night.

We went down to Varna, a 30 minute bus ride from our resort. Here, I was struck by the memories the city triggered of Budapest in 1997, where I studied for close to one year. In many locations around the city, renovations are on the way, while almost every street corner has a beer/wine/coffee/pastry/hamburger stand while every second street appears to have a statue of some sort where locals are trying to change money with you. "Where you from? Holland? I'll change 1 guilder for 1 Lev."

After some churches, the archaeological museum and some art galleries, we went for a damn cheap burger, featuring an extra belly stuffed with fries and mayonnaise, after which we had coffee and pastries at some immensely popular joint, right across from one of the art galleries.
At Albena, they push one pastry and one coffee for 4 Leva, 3.99 if you're lucky, which is just over 2 euros, a decent price you might think. Here in Varna, an espresso and a pastry go for between 0.55 and 1 Lev. What's more, the pastry is so good, it's definitely the best since my pastry days in Budapest and the 'Pasta Moskva' is possibly the best pastry I've tasted, ever.

Varna also reminds me of towns in Greece, mostly Thessaloniki. Then again, many claim that Thessaloniki is a Balkan sea port.

Related:  Kaliakra and beyond

The archaeological museum is good, although a little bit expensive at four Leva, also considering that half the museum is currently being renovated and not accessible.
The price exhibit is the golden artwork over 6000 years old. The oldest golden artwork every discovered. Interestingly, this art is Thracian in origin, tribes that occupied the central Asian plains as well as the coasts of the Black Sea. Again, as on several earlier occasions on wildly different spots around the globe, I was surprised about the similarities between these works of art and Keltic artwork from Northern Europe.
Also, a most impressive display was the grave of a Thracian, as it was uncovered in the 1970s, when most of the artwork on display was recovered from a nearby Necropolis. Looking at the amount of gold in the coffin and the way it was distributed around the vault, it wasn't hard to imagine the person, with staff, being dressed up as an ancient Indian (the north American variety) or Mongolian Shaman.
The staff he had resembled an Egyptian staff with solar disc. Then, remembering that this Thracian civilization pre-dates the Egyptian heydays by at least a thousand years and was wiped out from the Black Sea area after what most probably was the great flood (of Noah fame), it might just be possible these Thracians fanned out and started having a good time down south.

Varna is a nice place. I think I could live here. If only the babes were a bit more attractive. It seems the combination of Turkish and Slavonic tribes doesn't really work well. Not for the women at least.

Related:  Ian Kenneth – Trust is not an option
This text is available under a cc-nc-a license.