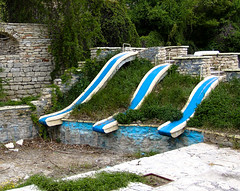 Betsy still struggling with her flu, we went down to the bus station to catch a ride to Balchik, only a little bit up north from Albena. According to the Planet a very nice little town with only few tourist traps and a beautiful palace with botanical gardens.
Entrance fee to the gardens was supposed to be four Leva, but turned out to be a whopping ten. We ended up enjoying the palace and the gardens from the outside, which wasn’t that much different from going in, and strolled along the waterfront, enjoying schnapps and salads whenever we felt like it.

The weather, which was promised to our Dutch neighbour at the hotel to be much better today, didn’t really deliver. Although we started off with a bit of sunshine, by noon, temperature had dropped, the sun had disappeared behind the clouds and it was starting to feel really fresh. What kind of country is this?
Oh, and Balchik IS slowly turning into something of a tourist trap. Not as bad, nearly, as Albena, but the whole four kilometre beach front is now lined with restaurants or hotels, or is crowded with new urban developments, hotels in the making for the coming seasons.

Did I mention that all the stray dogs in Varna, but also in Balchik, where there are only a few, have yellow or orange tags in one of their ears? You’d think that if they take the time to catch ‘m all and tag them, and, I suppose, sterilise them, they could also ‘put them out of their misery’, no?

Related:  Some of them received a heroes welcome
This text is available under a cc-nc-a license.