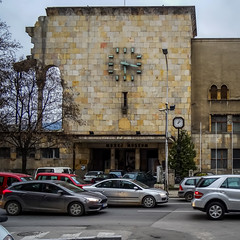 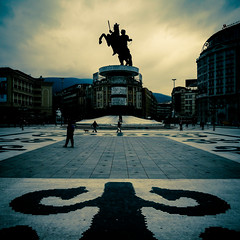 He, too, is Alexander 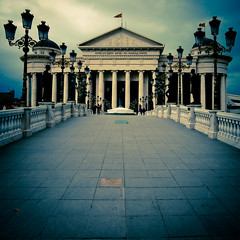 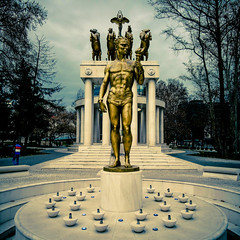 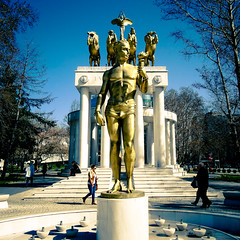 Fire from the gods 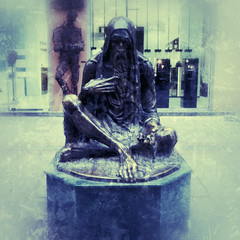 Remembering the city from my brief visit 16 years ago, I pictured a small if cute Turkic provincial capital that mostly felt outside of Europe. It seems that where the Greeks despised Ottoman control, Macedonia almost embraced it. Plenty of the statues in the city, as well as of course the old town reference Turkic history.
But, a lot has changed since. The many English double deckers plying the streets, combined with the recent bombastic neoclassical building boom strongly reminded me of Baku. There, the English flavor is provided by the typical London cabs, while the building spree is similar.

In Skopje, the double deckers originally were a gift from the UK after the devastating 1963 earthquake. Supposedly, with Yugoslavia being one of the non-aligned states, the excessive help from both the US and the USSR saw the two superpowers shake hands for the first time since meeting at the Elbe in 1945.
Also, now sufficiently long after its obtaining independence on Greece’s condition that the new country would distance itself from any potential Greek Macedonian connection, the state has gone full in with promoting its Alexandrine history. The main highway from Thessaloniki is the Alexander the Great highway, a large statue of the conqueror graces the city’s central square, with his dad cheering him on from the other bank and his mother nursing the future emperor in-between.
It seems the country is looking for an identity, as the once king of Macedon did not have the stongest connection with the Former Yugoslav Republic of Macedonia.

Macedonia’s claim to Alexandrine history is hotly disputed by Greece. Yes, Alexander was born and lived on grounds that are now Greek, but his family had controlled regions now part of Macedonia for generations. Some historians claim that Alexander did not speak Greek, something Macedonia likes to capitalize on, but this does not seem to be true, even though their accent was unintelligible to plenty of southern Greeks.
But, this is the Balkans. Ethnicity and heritage are fluid. Alexander was probably not survived by offspring (and if he was, his surviving child would have been swepped up by events in what is now the Middle East), though his direct relatives, who stayed behind in Pella, including his brother who ruled in his stead, of course did. So, with Macedonian control of what is now modern day Macedonia, the link between present and past is clear, but, in reality, not as strong as Macedonia likes to make it appear.

The archeology museum in Skopje, besides the many Alexandrine pieces on display, has some other impressive finds, including antropomorphic stoves from no less than 8000 years ago.

Another fresh comparison that can be made is with Prague. But, the stream that flows through Skopje is no Vltava.

The city, though still noticeably deep in Eastern Europe, has opened up to the west. The neoclassical building spree is part of it, but the many European chains and companies that now litter the shopfronts are part of the scenery as a matter of course.
In addition, pretty much everyone speaks usable English and is service minded. 15 years ago, I had to get by with broken Russian. Not so now.

The only exception I encountered at the train station. Skopje’s train station is quite a modern affair, with an elevated line running along the edge of town. However, the train services are limited. Greece regularly cancels the connection over some perceived slight in relation to Macedonia’s appropriation of Alexandrine history. Meanwhile, in the other direction, trains run only as far as Pristina, only a few times a day.
I was hoping to catch a train. But, at the station, I found the ticket booths empty with, in the large space behind them, two men consuming their lunch leisurely. Annoyed in their disturbance, I made it clear I wanted a ticket to Pristina. “What? Pristina?” “No train.” “No train?” “No train!”
Yet, the boards clearly listed several.