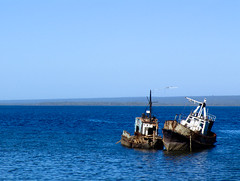 Taking public transport from Inhambane to Inhassoro, we already had gotten an idea of how slow transport in this country could be. On our trip to Inhambane, we only stopped once for a toilet break, but pulled over twice to help a broken down oncoming bus.
And our trip to Inhassoro was, indeed, slow. But there was enough to see. Besides the occasional chicken crossing the road (why?), we came across a soccer pitch with two large palm trees on it, saw a furniture manufacturer who used plastic bags as couch filling and hordes of kids jumping around enthusiastically while pumping water out of the ground.

To get a bus up north, we first had to get to Inhambane, some 20 kilometers from Tofo beach, from where we had to take a ferry across the lagoon to Maxixe (say ‘Mashish’), where buses would be going north. The actual ferry stopped working long ago and now the only boats doing the rounds appear to have come straight from Hong Kong harbor: narrow long boats seating 10 rows of four people.
On our ‘ferry’, three ‘sailors’ were wearing threadbare costumes most people wouldn’t want to be caught dead in. One had ‘TAHITI’ on his back, the other two suits read ‘VOADOR’.

The state the harbor was in and, for that matter, the state of the country as a whole, reinforced the idea that, say, 50 to 100 years from now, nothing will be left of most of the African continent besides the occasional tourist hotspot, burnt out cars, mud huts and locals walking barefoot, drinking beer and smoking ganja.

Maxixe, relatively, is a happening place. The bus station was actually busy. Still, we waited for nearly three hours for our (large) bus to show up, before taking the first (small) bus that left for our destination.
In Inhassoro, we were picked up by Semia and John, who runs a lodge on the Inhassoro beach. In Inhambane we already thought we had entered paradise, at Inhassoro, we understood it could get even better.