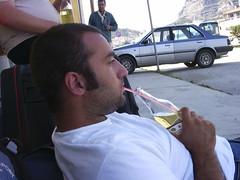 We arrived in Thessaloniki late in the day. I had tried to make reservations at a hostel, but the owner wouldn’t hear of it, even after my repeated asking.
When we finally arrived, there were no more beds available and when I pointed out I had tried to make reservations I got the angry reply that ‘I could display that behavior in my own country, not here’. Most probably, the older man running the hostel assumed I was Turkish and I decided I didn’t want to take the abuse, after he made that same comment several times. We ended up at a hotel, at only a couple of euros more.
When traveling back from Istanbul, we staid at the same hotel and paid as much as what we would have paid at the hostel.

Thessaloniki isn’t a very interesting town, although it’s bursting with life. It has only a few interesting sights. It’s unique selling point are great views of another kind: The girls are simply spectacular. It seems that Greek girls have a tiny figure but big boobs. What a place.

Related:  Roman Thessaloniki
This text is available under a cc-nc-a license.