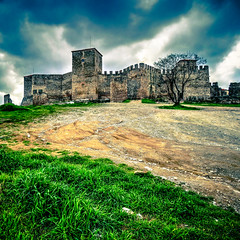 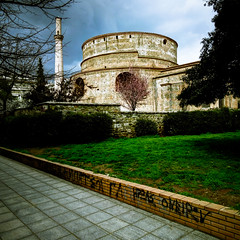 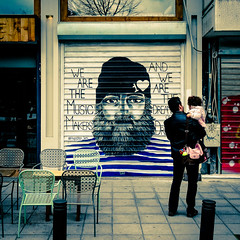 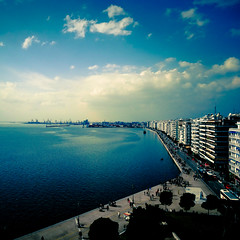 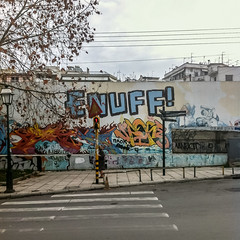 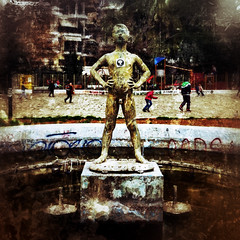 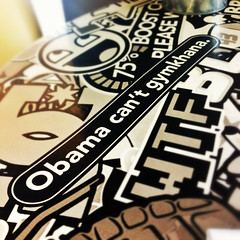 It’s striking to actually see, first hand, the architectural similarities between not just the religious architecture in Greece and Turkey, and Greece and Russia, not a surprise to most, but also the similarities between these two and the rock churches in Lalibela, in Ethiopia.
Interestingly, it gives the impressive churches in Ethiopia, none of which have straight lines, together with their paintings of a more hopscotch variety, painted by less gifted artists, a somewhat cargo cult feeling.

The Thessaloniki fortress, inside the acropolis, in the northeastern corner of the old walled city, is currently under renovation but, either way, not exceptionally impressive.
One aspect of the construction is intriguing, however; the south facing entrance, an imposing gate, with, now, only a small entrance.
Many of the stones used in its construction were appropriated from far and wide: a large Arabic inscription above the door, a host of mediaeval crests as well as a series of columns, embedded into the walls, not all straight, some upside down.

In orthodox religious paintings, patron saints of churches, or their founders, are typically depicted with a miniature version of the building in question, in their hand. These miniature churches can also be found on street corners around Thessaloniki, where they are used for leaving offerings.
This is reminiscent of how East Asians have little shrines in their garden or outside their front door, regularly on stilts or on a pedestal, very much like the little churches in Thessaloniki.

Impressive is the Rotunda, a fourth century circular edifice about 26 meters high. With six meter thick walls, it’s not hard to compare it with either the Parthenon in Rome, though perhaps not as impressive in its construction, and the Castel Sant’Angelo, right next to the Vatican.
The building’s explanatory plaque explains the conversion of the building into a mosque after the city falling under Ottoman control, with the construction reverting to a church after the city’s liberation in 1912, after some 400 years.
If it’s still liberation after 400 years, some 16 generations, what hope is there for Europe absorbing the current influx of refugees and calling them their own?

It’s hard to overstate the current refugee crisis. Nigel Farage complains about Europe not doing enough in the face of mass immigration, a handful of European countries close their borders, Pegida demonstrations in Germany attract more and more right wing as well as mainstream supporters, but it’s Greece that suffers the bulk of the flood.
Thessaloniki has a relocation center on the edge of town, while north of the city, close to the border with Macedonia, a refugee camp with thousands of refugees, Idomeni, sees the Greeks being forced to deal with the consequences of the Syrian war.
Several NGOs operate inside the camp, for which volunteers from all over Europe come to prepare food and distribute clothes. Some of them I met in Thessaloniki after they had spent a few weeks on the border.
What surprised me the most was the presence not just of Syrians, but also of, according to these volunteers, Afghans and even Bangladeshis.

Some of he latter were making a living in the center of town, selling sneakers and sunglasses while on the lookout for patrolling police. When the police did show up, the vendors ran off, throwing their goods over their shoulders, using a rope threaded through all of them. One of them left a fake and lonely green All Star behind.
A confused German tourist called out to the running Bangladeshis: “eh, you forgot a shoe!”