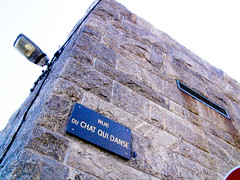 The nearby (near to Le Mont Saint Michel) town of St. Malo is nice for its old city, compact and surrounded by massive city walls. The walls being the only part of the old city NOT destroyed during the second world war.
Known, also, for its large difference between ebb and flood (up to 13 meters), the tourists appeared to visiting in their thousands. We quickly made our getaway to Carnac.

I wonder how many people have realized the similarities between the names of Carnac (France) and Karnak (Egypt). I’ve been fascinated more by the former every since I first heard of it, possibly in a ‘Suske & Wiske’ (Bob & Bobette) or Asterix comic.
Now, I find it very unlikely we didn’t visit the site on my previous visit to the area. We had no choice but to visit the place now. Carnac, however, just like the other places in the area, seems to have more tourists than monoliths nowadays.
Buying a combination ticket for a tour amongst the stones the next day (they’re now closed to the public during summer, except on guided tours) and a visit to the ‘site megalithique de Locmariaquer, we drove down to Locmariaquer to enjoy a fallen menhir and the Er Grah burial mound.

Some struggling later, we managed to find a bed in Auray, a bit north from Carnac. Ringing the doorbell at one guesthouse, the owner showed up with a rather mistrustful look on her face: ‘Are you Italian?’, ‘No Dutch…’, ‘Ah, okay, I don’t have a room, but a friend of mine has. I’ll show you…’

Related:  Harare tree signs
This text is available under a cc-nc-a license.