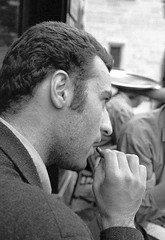 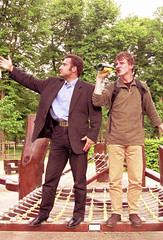 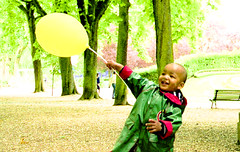 Metz is a city you are likely to skip when travelling to France. It's small, and has nothing much going for it. However, it's a nice little town, definitely worth a stopover. Laying on the banks of the river Moselle, the main (there are two of them) city center can be found around the cathedral of Saint-Etienne. A gothic piece of masonry, built from the 13th to the 16th century.

We stopped in Metz for two reasons, the city is on the way to Nancy, and the cathedral was so obviously beckoning us when approaching the city, that, basically, we had no choice but to get a coffee in this capital of the Moselle department. Don't let the fact that the city is a capital mislead you. France is divided in so many districts, that almost every cities with more than 100.000 people is a capital (Metz has about 110.000).

Metz however, is a bit older than you might think. The city had already built up some significance before the Romans conquered France. Not too surprising then, that France's oldest church is situated in Metz, dating from the 7th century.

Doing the obligatory stroll past the city's tourist attractions, on the square in front of the cathedral, we where ushered in to a tent, set up to promote bread. Yes, bread. Our French isn't perfect, and to be honest we didn't listen at all to our guide as he explained all about the 50 or so different types of bread he had on display. After the tour, we thanked him and received, as a token of good luck I guess, a bun. It sucked.

The city has a big and cozy shopping district. In weekends, Germans flock to the city in droves, convinced that goods can be obtained cheaper and that shopping is nicer on the other side of their road.

Nancy: just what you fancy

Nancy, the capital of the French Meurthe-et-Moselle region, lies on the banks of the Meurthe and the Marne-Rhine channel. The first thing you'll notice when driving up to the town, by car or train, is that it doesn't seem to have anything going for it. Fortunately, this is a big misconception.

In Luxembourg, we where able to make a reservation for the hostel in Nancy. Entering Nancy, trying to find a tourist office, from the car, we asked an older babe, where to find the youth hostel. Surprisingly, she knew where to go. The hostel is some 10km from the center of Nancy. Don't think about taking a bus back late at night. You'll have to stay in the city, or take a cab back.

The setting of the hostel is beautiful. Sitting on the side of the hill, the small castle looks into a valley, with a big park all around. Definitely one of the better situated hostels you'll encounter. Just after checking in, we stumbled across a somber looking guy, sitting in front of the hostel, arms crossed, sunglassed, cap, fierce looks. The guy, of course, was Australian. After some good stories of a typical Aussie custom of driving in circles with a truck, towing a small car, trying to top it over, we decided to give the Muppet a ride into town.

The town has quite an impressive range of Art-Nouveau buildings and some nice museums to boot. As specially this year, now that it's 100 years since the start of the 'School of Nancy', 3 major museums run very interesting exhibitions.

When weather permits it, which is quite often, students from one of the universities, the oldest dating from 1572, can be found all around town studying artwork and making sketches of one of the many Art-Nouveau buildings.

The town not only attracts students. When hanging out on the main square, we where not only welcomed by numerous youngsters, trying to flex their verbal muscles in talking English with us (and us not understanding them), but also encountered Sticky. Sticky, as it turned out, was, as they say in France, as old as the highway to Rome and claimed to have served in several armies, ranging from the French, during the war in Angola, all the way back to the Turkish army, when invading Europe in the sixteenth century. In-between jobs, he claimed to survive by driving people around in his double Decker bus. Sticky seemed quite believable. Really.

The people of Nancy enjoy life, and the number of Restaurants and bars prove it. Restaurants are scattered all over town and getting good quality food is not related to the price you pay for it. Sure, the setting might be a bit better, the silverware might be actual silver or the waitresses might be a tad better looking, but in the end, the food is good anywhere you can get it. If you find it on the menu, the 'quiche Loraine' is a definite go!

Encountering a couple of local babes, aged 16 and 17 (we only found that out after they screamed for forgiveness), the friendly young ladies took us to an in-crowd student bar with live artists unable to stop drumming African beats.

When trying to return to the hostel, we discovered that it really is impossible to try and fit seven people and two bicycles in a Mazda 323, so we had no choice but to undress and spray the girls with genuine Champagne (16FF a bottle!) right there in the city center and lick our goodbyes. Dazed, but satisfied we left for our castle.

Nancy is a nice city to stroll through. Featuring a large, friendly park, La Pepiniere, with a free zoo to boot. Other things of interest are the Cathedral and the Notre-Dame de Bon Secours church, from the 18th century, with the mausoleum of Stanislaus Lesczynski, a local hero of the last century.