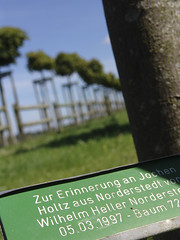 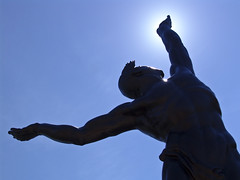 Reach for the sky 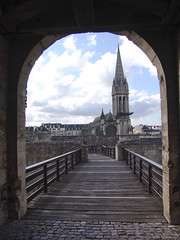 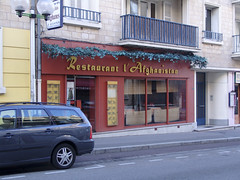 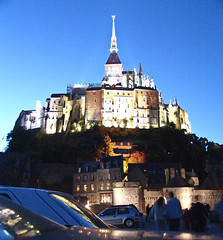 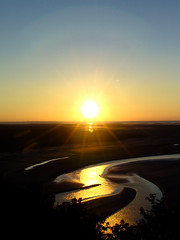 The sun going down, from Le Mont Saint Michel 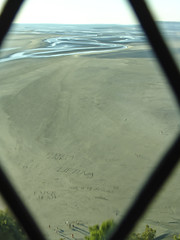 Writing in the sand 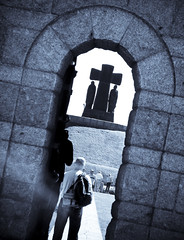 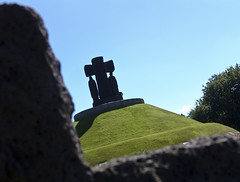 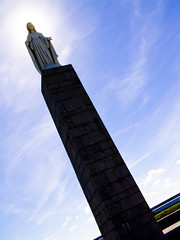 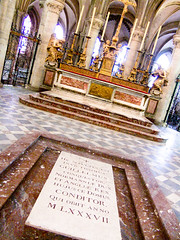 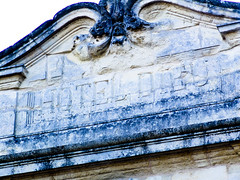 Caen, the next morning, wasn’t as impressive as I hoped it to be. For starters, everything was closed. Either because it was Monday or because it was August.
There are three main sites in Caen: An old fort, the women’s monastery and the men’s monastery. We visited all three, as far as it was possible, saw the grave of William the Conqueror, and rushed off to the nearby D-Day beaches.

The number of cars in the parking lots of the hotels we checked out the night before didn’t suggest these hotels were ‘complet’. The number of tourists on and around the D-Day beaches easily confirmed it. It was packed, with tourists. It was also the first time of many in the next couple of days I vowed to never go on holiday in France again during the summer months.
Besides the beaches we also visited an American and a German cemetery. The contrast between the two was striking. The American cemetery, very American, tried to impose and bestow America’s grandness, both on the fallen and on the visitors. The German cemetery was much more introspect, reflecting, humble and therefore much more impressive. The German cemetery also contained almost three times as many fallen as the American cemetery.
On the road towards the cemetery, a long stretch of trees makes something of a ‘peace forest’. All threes were funded by relatives or friends of fallen Germans, with every tree having a small plaque with information on the funder and the fallen. The whole thing was very, very touching. For the strong personal nature the sheer number of trees and the beautiful, touching, symbolism.

Betsy wanted to see Le Mont Saint Michel, our next stop. First finding a place to stay, we ended up with a farmer who had clearly given up the farming life and was now renting out rooms to unsuspecting tourists. The rate was reasonable enough and the breakfast, the next morning, quite fantastic.
And since there was still enough time, we headed out to the Mont the same evening and enjoyed the setting sun and a tour of the abbey. The tour, with ‘music’ and ‘plays of light and mirrors’ was reasonably interesting, if not nice for the very few tourists inside the abbey. Still, they could have left out the rather crappy ‘plays of light and mirrors’.
What was new, since my last visit, were the many campers on one of the parking lots close to the Mont. I secretly was hoping for a flooding, but no such luck. There’s a plan of removing the parking lots and the current dam and replacing it with something of a long walkway, from coast to Mont. I hope they’ll be able to realize that.

Returning from the Mont, restaurants were closing. ‘Every restaurant is closed’, we were told by one owner, so we proceeded to find a restaurant still serving decent moules-frites. No problem.