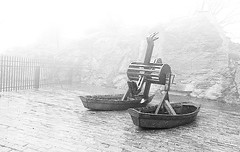 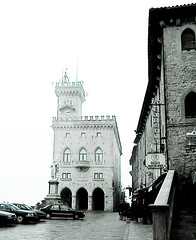 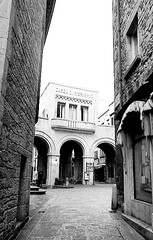 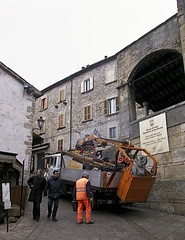 Taking two consecutive boats and one train, I arrived in Rimini, from where once every two hours a bus departs for San Marino. The 'garderoba' in Rimini was closed. A sign told me this was for 'Safety reasons'. Asking around, I learned that the safety reasons were 'September 11th'. It meant I had to drag my backpack along on my day trip to San Marino.
Additionally, upon arrival, I had missed my bus by only a couple of minutes, meaning I had to wait two hours for the next bus. Getting on the bus, the driver didn't accept my 50 euro note as payment; I had to change it into smaller currency. After running around for several minutes, the only other tourist on the bus, an Israeli, helped me out by paying my ticket for me.

On the boat from Split to Ancona I was trapped on both sides. On the right, a Bosnian girl from Banja Luka where, she claimed, women outnumbered men by 25 to 1. She was studying graphical design in Firenze. When the war broke out in 1991, she was living in Sweden but felt so depressed out of boredom, she felt more at ease in a war torn Bosnia than in an everyday-is-the-same Sweden.
On the left, an older Croatian women couldn't stop talking about her now-dead husband who had been a fencing champion in the 1970 Olympics. A three time Olympic champion. She was now living in Foggia. When she stopped talking, after two hours or so, falling asleep in the rather uncomfortable 'air seats' was easy.

San Marino is a real tourist trap. A few small museums, some expensive restaurants and many shops selling touristy knick-knacks. True, the view from the rock the country is built on is fantastic. It is said. When I was there, a thick all-encompassing fog was blocking my view continuously.
When we, the Israeli and myself, were waiting for the bus back to Rimini with five others, the bus just passed us by, ignoring us completely. With two English guys, also waiting for the bus, we went for a couple of beers, in the hope the next bus wouldn't pass us by either.

Related:  The babes of Twin Peaks… where are they now?

Back in Rimini, the gods still weren't favourable. Because of a strike, many of the trains weren't going so we ended up in a small bar where, with an outside temperature of some five degrees Celsius, the Italians were still wearing sunglasses.
Pretty soon, we were talking about the situation in Israel.

After a while, Justin commented on the problems in the Middle East. He started off on something that could only conclude with a negative remark on Israel's stance in the matter: "The situation is… ". Everyone was holding his breath. Tal, the Israeli, who claimed to have served in a secret military unit, seemed ready to grab a knife and slit Justin's throat. "…difficult." I could physically feel everyone's relief. Tal's train was leaving, heading for Ancona. The English and myself headed for Ravenna.

In the Ravenna youth hostel, I asked where we could still get something to drink. The man-woman looked at the clock: "10:45? Ha! Everything is closed in Ravenna!"
I took out a bottle of brandy I had brought from Croatia and we finished it in some 45 minutes, just before curfew.