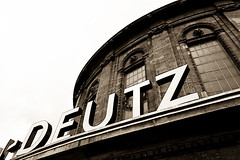 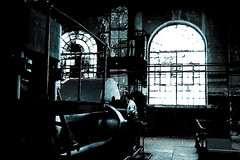 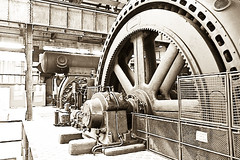 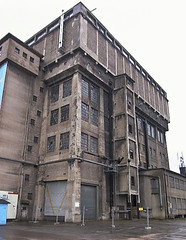 Outside the Voelklingen iron works

After visiting my family in Germany, it was time to go home. Choosing between a very expensive but quick train and a slow but cheap bus to Holland, I opted for convenience. Only to end up with a three hour delay at the border because some poor bastard had decided he couldn't handle life anymore.
Besides the suicide, this part of my journey had been reasonably quiet and I had some time to think about what I should be doing in the next couple of years. I couldn't decide. I realised that the young fellow (for that was what it was) who had jumped in front of my train had decided there was no future for him anymore.

My relationship had already been shaky before I left but talking to my girlfriend while on the last leg of my journey made it clear it was over. I hadn't brought a house-key so I was stuck and had to crash my parents place. When I opened the door, I was welcomed by the cat running towards me with sleepy eyes and a tilted head, as if to ask what, in gods name, I was doing there at that time of the night.
Some minutes later, I had singled out the spare bedroom and was laying on the bed, still half dressed but with a snoring cat on my chest. I fell asleep and I dreamt. I dreamt of the walls of Dubrovnik, of Ali and Galentino in Sarejevo, of the caves of Postojna, of Eszter's house just outside of Budapest and I was still traveling, discovering things I hadn't noticed the first time round. And I dreamt I was able to postpone my return to reality, not unlike the poor fellow killing himself earlier on the day. I dreamt. And I was tired.

Related:  Eurovision Song Contest 2010
This text is available under a cc-nc-a license.