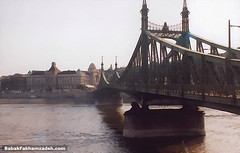 In the background, the Gellért, the city's most famous bath house 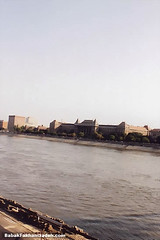 The Technical University of Budapest 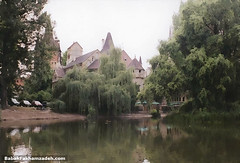 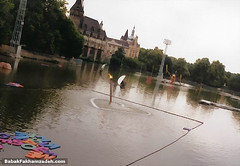 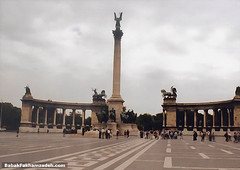 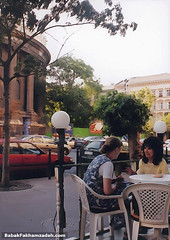 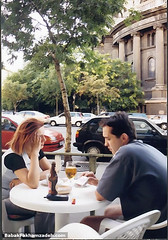 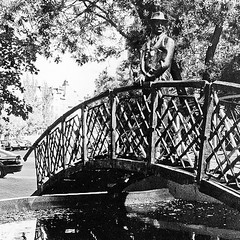 Take me to the bridge 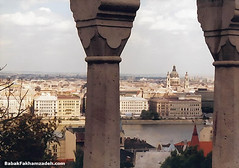 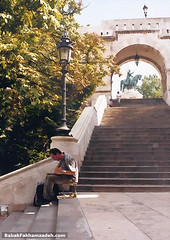 Painters making and selling pictures on the Fisher's Bastion 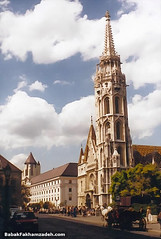 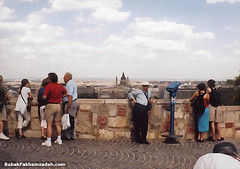 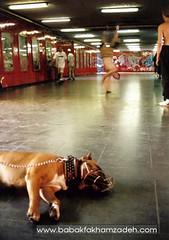 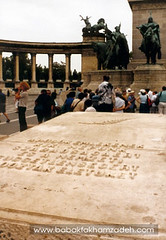 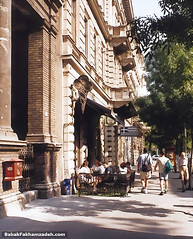 It was a good decision to leave Holland a couple of days early and visit Budapest. I was doing absolutely nothing noteworthy. Leisurely moving from one sight to the next.

Luckily, after a year living here, having friends visit every other month, there is nothing that I haven't seen in Budapest anymore. So, I could do whatever I wanted without really missing any site. I've seen it all, at least once, either when I was here for the first time in 1995, on holiday in 1996 or when studying here in 1997.

One of the stories that almost every tourist visiting Budapest can tell you is the one about the architect of the city's chain bridge, spanning the Danube. The bridge has a number of lions on both sides of the bridge. When building finished, the architect noticed that he had left out the lion's tongues. As a result, considering himself a total failure, he jumped to his death, jumping of the bridge he had designed himself.

The tourist 'distribution' in Budapest is very remarkable. Interesting places that are located a mere minute's walk away from each other are completely infested or totally bare of tourists without there being a clear pattern. One of these examples is the castle in the Varosliget. The castle, at least equally interesting as Hosok tere, which is located almost next door, is completely void of tourists, where Hosok tere is completely filled with tourists.

The castle, located in the city park, or Varosliget, was built as an example of Hungary's 7 major building styles. What's equally nice is the park that surrounds the castle. Very relaxing, the park is almost always completely empty, the occasional tourist seemingly lost

Besides the castle, the park also holds the best baths in Budapest after the Gellert and a very nice small lake. When chilling at the lake, falling asleep in the sun between short reading sessions, a couple of kids were catching fish with a plastic bag.

From the first time I set foot in Budapest in the summer of '95 until when I left in August '97, Raday utca (Raday street) had been sealed off for traffic. Not that they were working on it, improving it. It was just sealed off.

Imagine my surprise when the screens blocking off most of the street had actually disappeared. In fact the whole street had been renovated and now looked really good and totally clean, resembling an upscale promenade.

The reason for me being there was finding out if the Persian restaurant that I used to frequent was still alive and kicking. Back then, the setting wasn't all that good. It looked like any regular snack-bar. But it did serve wonderful food.

Now, after the upgrade of the street, Shiraz, the restaurant, had upgraded itself as well. Not only was there a quite luxurious restaurant, operated by the same Persian guy, around the corner. The snackbar had grown into something of a luxurious take away with a permanent terrace on Raday utca. The food, was still equally wonderful. The prices, however, had skyrocketed. Still, however, below Western standards.

I had a hard time recognizing the owner of the restaurant. Only after some time, when I had had the chance of looking him straight in the eye did I notice it was the same man as three years ago. Apparantly, renovation of the street and the upgrading of his restaurant had done him good. More guests, more employees and more turnover had meant more profit. Before, this man looked worn out. Now he looked self-assured and happy.

Depending on the weather, I had planned to spend the day either at the Balaton or in the Varosliget. However, when I woke up, weather was bad. Clouds everywhere and not a very high temperature at all. During the day this slowly changed. The clouds disappeared, the sun came out and slowly but surely it started to get hot. When, in the evening, the sky was getting a little bit more cloudy again, the night promised to be tropical.

I wanted to get myself a ticket to an open air showing of 'Jesus Christ Superstar', by Andrew Lloyd Webber on the Marghitsziget (Margaret's island) in the middle of the Danube river. Right after eating at Shiraz, I had taken a tram to the southern end of the island and walked northwards, where the theater is. Arriving, I found that the tickets were a lot more expensive than what I expected, the cheapest starting out at some 1200HUF (about $5). Comparing this to the 500HUF ($2) I had just paid to see MI:2, this was alot. In 1997 I frequently went to the National Opera or a classical concert for sometimes as little as 150HUF. Imagine my surprise when I saw prices for this showing of Jesus Christ Superstar go up as high as 5000HUF!

I thought it over a bit and decided to go for a cheaper ticket. Lucky me, some of the most expensive tickets weren't sold out, so I was able to move into front row position for a back row price. Not that it did me as much good. The show was very good, but halfway it started raining so badly, that the second half of the show got canceled. What was a surprise, though, was that in all the four versions of this play that I had now seen in Budapest, each time, Judas was being played by the same actor. Does this guy ever get a life?

On my way back from Jesus Christ Superstar, I stopped at Maxim's. A small scale restaurant littered with Soviet memorabilia and wall paintings. This place, too, hadn't changed at all, the menu still being the same, the wall paintings ('Taste the East') still identical, even the prices hadn't changed much. The restaurant sells pizzas with names like 'CCC Pizza', 'Siberian Morning' and 'Dear Papa Marx'. Funnily and happily, Maxim's, littered with Hungarian youngsters, still seems like a place not frequented by tourists.