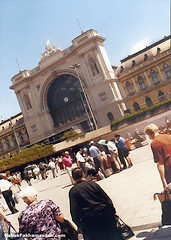 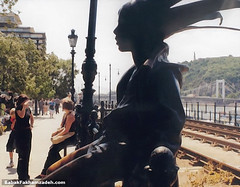 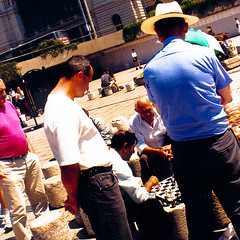 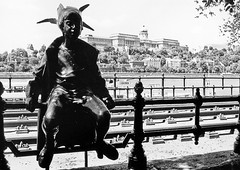 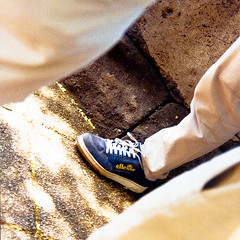 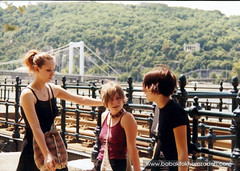 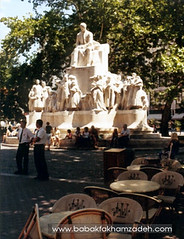 Too much to eat 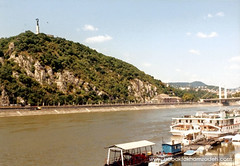 The blue Danube
World » Hungary » Budapest » Over the Danube

Budapest was a shock by not being a shock at all. Over the past three years, the city hasn't changed at all. Sure, Dunkin' Donuts have retreated from Hungary and Moskva Ter is under construction, but that pretty much summs it up. The same people on the streets, the same stalls on the pavement, the same shops on the sidewalk and the same signs on appartment buildings. The city hasn't evolved much in its look and feel over the past couple of years.

The places I frequented when I lived here; Nagyi Palacsinta, Muzeum cukrazda, the Black Cat, hadn't changed at all either, and that I found even more surprising. Even the small dodgy shop next to the metro entrance at Moskva Ter, selling cakes, pastry and coffee from a small window was totally unchanged and still being run by the same guy.

Some time ago an English colleague of mine asked if there was ever a girl with whom I could see myself spending the rest of my life with, I mentioned the name of the girl that got married last year. This was, of course, way before I met the *love* of my life, my current girlfriend, of course. This made me understand, just a little bit, the feelings of the girls I've dumped over the years…

When walking through Budapest, I bumped into the same tourgroup twice. The guy doing the tour came to my attention because of his shoes. Just the day before I left on holiday, my car was broken into. With close to $1500 in damages, the one very remarkable thing about the break in being, that between the passengers door and the car, the thief had inserted, wait for it, two shoes… Yes, two shoes. Sneakers.

The tour guide was wearing the exact same shoes as the ones I found stuck in my car. The result was that I listened a bit to what he had to say to the group he was leading through the city. Apparently, Buda comes from the Slavic word for water, 'voda', since Buda has numerous springs. Pest comes from the Gaelic word for 'mud'. For the reader who thinks he is missing something, Budapest only exists for about a hundred years. Before that, it used to be three independent towns; Buda, Obuda and Pest.

I was going to meet an old friend of mine for dinner and I considered going to Lake Balaton the next day, but that would depend on the weather. Meanwhile, I noticed that the desire to return to Budapest, which had grown and grown over the past three years was now totally gone. Don't get me wrong, I still liked the city alot, but it slowly had become clear that Budapest was now a part of my past. It was very nice. The operative word being 'was'.

Eszter, the girl I was going to meet in the evening for dinner, had given me her GSM number, so that I could contact her as soon as I would arrive in Budapest. Of course, I had written it down incorrectly, but fortunately, she had also given me her office address. Visiting her at work, I learned that she had received a very sudden and unexpected work-load, meaning she might not be able to meet me for dinner that evening, as we had planned.

Related:  On a book cover, Hash at Hartbeespoortdam and tickets to the Oscars

As always, she did manage, saying she could finish up her work after dinner. The only thing left to do for her after dinner was to build 22 charts in Visio…

We ate at Vista. Good soup, mediocre main dish. And a waiter on drugs. By the time we arrived at her place, it was about 10:30. And she still had to do quite a bit of work.

Her boyfriend had planned to join us for dinner but wasn't able to make it. Norbert was at home when we arrived, resulting in us starting on some home made wine and chatting the evening away. I offered a couple of times to leave, but Norbert and Eszter wouldn't hear of it. The wine wasn't exactly convincing me to go either. When I finally did leave, it was already 12 at night and I was going to have to take the night bus home. Saying good-bye outside of their apartment, as if to punish Eszter for not doing her charts in time, a bird shat on her shoulder.

The restaurant where we ate, Vista, is quite remarkable. When I arrived in Budapest near the end of 1996, I soon learned that THE budget travel shop in Budapest was a small office called 'Vista'. Not only was staff very friendly, still something of a curiosity back then, they also were able to arrange budget trips to almost anywhere in the world, including one way trips to the major European airports. The first time I visited Vista, the office was nothing more than a 50m2, one-room, operation. Four people working at breakneck speed to serve the multitude of customers.

Just before I left in August 1997, they had already expanded, occupying an office about five times their original size, with even better service and a travel bookshop. And now, they had also added a restaurant. Built in the same style as the travel office, dark wooden furniture in a friendly atmosphere, the place is quite enjoyable. The music, ambient and slow drum and base, is played at a relaxing sound level. A pity the quality of the food wasn't up to the same high standards.

After saying good-bye to Eszter and Norbert, I took the night bus back to Moskva Ter. From there I walked to the hostel. Some 20 to 25 people were sleeping on benches in a small park that I passed on my way to the hostel.