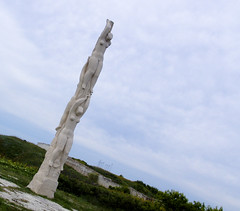 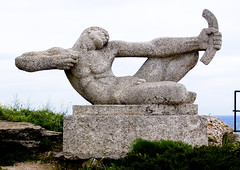 Having the car for a second day allowed us to drive around aimlessly and do things and visit places we otherwise only could have visited on expensive tours or with an expensive taxi. Although, it has to be said, taxis are reasonably affordable if you get them against the advertised rates.

First following the coast north, up to Cape Kaliakra, we entered the Kaliakra nature reserve, in the hope of seeing some rare dolphins and seals. No such luck as we encountered school bus after school bus of young kids on what appeared to be a school trip, on a Sunday afternoon.

After Kaliakra, we visited the remains of a nearby monastery, cut out in the face of a steep rock face. Although quite impressive for the work that must have gone into it, it has also has deteriorated quite a bit, the relatively soft stone simply having eroded away over the years.

I wanted to finish off in Varna, visiting two statues there and then go for dinner. The first statue, clearly some war memorial, turned out to have been left in complete disarray, service and upkeep having stopped years and years ago. Later, I learned that the war which the statue remembered was actually the Russo-Turkish war which ended in the liberation of the Bulgarians from the Ottoman rules in 1878.
We never made it to the second statue, a huge statue in Varna’s main park, because Betsy simply fell asleep walking.

Related:  Ian Kenneth – Trust is not an option
This text is available under a cc-nc-a license.