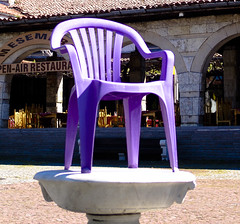 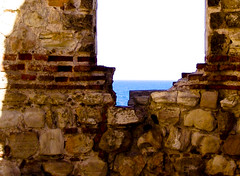 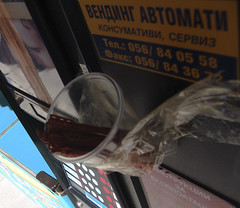 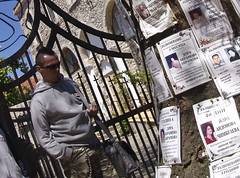 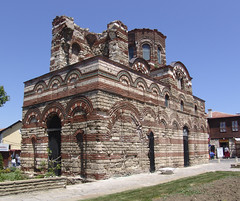 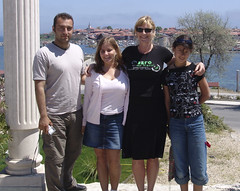 A church in Nessebar

Nessebar, Romania, in the mist
World » Bulgaria » Nessebar » In front of the Basilica

I wanted to rent a car yesterday, for a long weekend, allowing us to escape the expensive confines of the tourist colony that is Albena. No such luck, as we ended up on the beach, getting a sunburned without noticing due to the still chilly wind that's sweeping Albena, while it's not rushing through Varna, only 25 kilometres away.

So we ended up at 'The Old House', where the average age of the guests appeared to be in the 70s and where the food was below par but the service friendly.

Today, after tracing down our neighbours at the hotel, who had expressed interest to join us on our trip to Nessebar, yet another tourist trap on the Bulgarian coast, however this one with quite a bit more authenticity, having ruins of many, many churches, on a peninsula the size of four soccer fields.
Of course, there are now more currency exchange booths on the island than churches and every second building appears to be a restaurant, but the oldest ruins, still on the island, are at least 2000 years old, and it was already inhabited 3000 years before that.
And even so, prices of drinks and food here are still only about half of what they are in Albena.

The trip was nice, the weather good and the food, which we had at a nice restaurant on our return journey, in Varna, was fantastic. However, entertainment could have been better, with the mom only ending up dancing on the floor, not on one on the tables, after developing a mother-like fancy for the 19 year old boy serving us.

Related:  More comparing
This text is available under a cc-nc-a license.