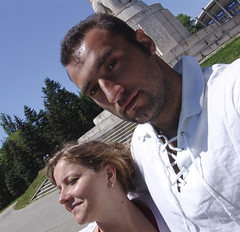 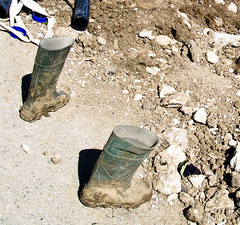 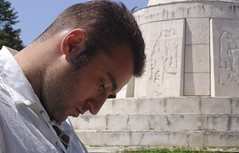 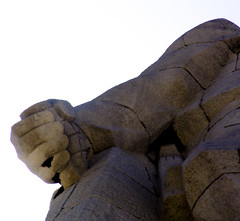 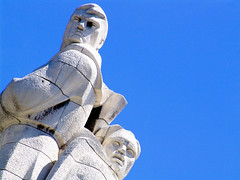 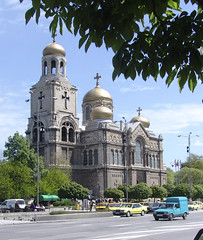 Taking in the last couple of sights in Varna we missed on previous occasions, Betsy stopped at every second stall selling sun glasses to get that insect look at a decent price.
Most of the time we spent at a major monument in Primorski Park. It's a freedom monument, commemorating the communist struggle that went on from 1923 to 1944.
Around the statue, commemorative plaques have been laid out, to remember the Bulgarian cosmonauts that joined the Soviets into space.

The statue is located inside Primorski Park, your typical communist-era lush green oversized relaxation area. It not only contains the obligatory ice cream, popcorn and nut sellers, it also has the train rides, statues, but also a zoo, a terrarium and a dolphinarium.
I vaguely remember visiting a dolphinarium when I was a kid, but I don't remember being that impressed. Also, watching dolphins, sharks or whales at work on television never installed something of an awe, wonder or desire to see these mammals at work.
Now, however, visiting the dolphinarium here in Varna, apparently the only one in the Balkans, we had drinks and a bite to eat at the cafe attached to the dolphinarium, where you have access to seven huge windows, looking into the tank.
Dolphins swam by and after we became glued to the windows, they started playing with us. Swimming, past the windows, up to our window, so that we only could see them at the last second and then, right in front of our face, open their mouth.
Later, attracted by our making noises by tapping the window, they would stop by again, and make circular movements right in front of the window, while constantly looking at us, with one eye, then with the other.
At three, when it was time for the dolphins to start with their regular show, to which we did not go, one of the dolphins swam up to our window for one last time, making high pitched noises as to invite us to the show, came up really close and pressed his air-hole right against the screen before swimming off.

Related:  The joy of Varna

Then, walking back through the park to the downtown area of Varna, we noticed something obscure. The whole park appeared to have been taken over by single moms with strollers. I'm serious, we encountered single mom after single mom, not a husband or boyfriend in sight. Not ten, twenty or thirty, hundreds!

Back at the bus stop, going back to Albena, Betsy was nearly mugged by a girl. Acting as a group, girls walk up to someone from behind and try to open the bag. Betsy scared her off, just after noticing her objective in time.
Then, while waiting in the bus, we watched them at work. Once, I saw the same girl come up to an older woman. I jumped out of the waiting bus and started shouting, after which the girl decided it would be safer to get away, and ran off in a hurry.
Shortly after, however, she was back, and we could see her in the distance following a tourist. The tourist started running to cross a street on a dying green light. The thief started running with her, while continuing to try and open the tourist's bag!

While Albena is starting to fill up with tourists, the weather is also improving quickly. The wind still being fresh, directly in the sun, temperatures already get up to 25 degrees, and they're set to go even higher, right after we leave.

Besides tourists and sunshine, hookers are also starting to pour into Albena. They cruise the major shopping street, harassing older men, some of whom dislike this invitation to a good servicing, while others love it.

Related:  Getting lost in Paris and London

Also, we found out that the Lidl in Albena is fake, using a slightly incorrect but nearly-perfect logo above the store and on the plastic bags.