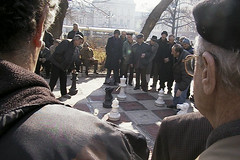 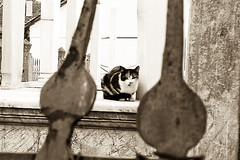 Kitty on a grave 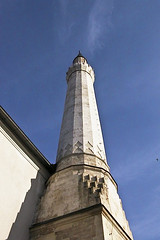 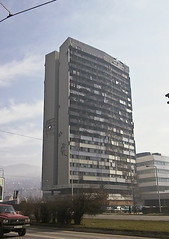 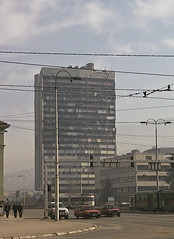 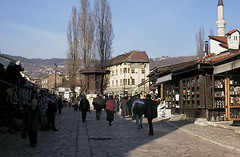 Sarajevo is said to be the fastest changing city on earth. Walking through its streets, experiencing the mix of Turkish bazaar, art-nouveau, neogothic and modernism, combined with the, supposedly, 101 minarets, I suppose it makes sense.
On the negative side, Sarajevo seems to be missing something of an identity itself, besides being so much of a mix of identities. Considering the war, with people moving around the countries in former Yugoslavia, this too isn't very surprising.
Another thing I noticed were the vast amounts of beggars in the streets. Something I didn't see in either Mostar or Travnik. Mothers with young children, walking past the outdoor terraces, clutching onto an English letter trying to elicit compassion.

There's still one hotel left on "Sniper's alley" that displays the beating it received during the siege of Sarajevo. That is, the carcass of the building is still standing, totally shot to pieces. During the siege, Sarajevo, sheltered by hills on all sides, was besieged from all sides. Snipers tried shooting people who dared to show their faces out on the streets.
Some of the bullet holes in the pavement have been filled with yellow rubber, giving the impression of a rubber hand being stuck in the ground.

When I got of the bus in Sarajevo, a guy of about 30 asked if I needed a place to stay. He first tried to contact a woman whom he said rented out part of her house. When Galentino couldn't reach her by phone (he used a payphone), he suggested I'd stay at the same place where he was staying. I agreed and we picked up a friend of his, Ali, (who was staying at the same place) and we left.
The bed at the lady was supposed to have cost 20KM. His place, he claimed, also cost 20KM per night, although I soon figured I was overcharged. When the owner of the place, Mickey, came up to collect the money, he collected 10KM per night for my staying there.
Both Ali and Galentino looked like bums. Ali was Serb, but having no passport, he wasn't able to leave Bosnia. Ali only spoke Serb and was missing about half his dentures. Galentino was half Italian. Both wore clothes anyone in western Europe would have put in the trash years ago and, later, Galentino would even beg for clothes from me. By then, I had gotten so much fed up with the implicit begging he did, I had difficulty to restrain myself.
Both turned out to be married and have kids. Ali's wife and daughter were living in Beograd, Galentino's in Italy.

The place we staid at, 10 minutes by foot from the train station, was no more than an attic with four small rooms, of which one room wasn't used. Through stairs, you ended up directly on the street, without having to go through the main living area downstairs, where Mickey lived.
The second and third room were a small, rancid, smelly kitchen and a bathroom with only cold water. The fourth room was a bedroom, barely big enough to fit six mattresses in two rows of three, leaving a small empty area in the middle, reserved for a TV, a small table and an electric heater.
When we entered the room, Ali walked in and stood in the middle, stretching out his arms, tilting his head up, smiling, as if to say "So this is our humble abode". I felt sorry for the men.
Three of the mattresses were for Ali, Galentino and myself. The other three beds were occupied by three Turks who were trying to get into Fort Europe illegally. Later, when only one of them returned, the other two turned out to have been caught by police, being extradited almost immediately. The next day, three new Turks were occupying the three beds.
Galentino, although talking friendly with the Turks, later confided that he didn't like them at all: "They smell, can't do anything and don't belong here."
Nevertheless, talking a combination of Turkish, English, German, Italian and Serb, Galentino learned that one of the Turks was actually a Kurd. They all agreed that, in fact, it wasn't people who were interested in war, but politicians.
Galentino suggested he'd show me the city the next day. I made it clear I'd prefer strolling through town by myself but agreed to a beer in the evening.
I let them decide on a bar and for obscure reasons, they chose something on the other side of town. We had to walk for over half an hour and on top of that we had to pay 3KM for a small beer. That is, I had to pay 3KM each for three beers. The bums didn't have any money. Closer to 'home', I had seen large beers being sold for only 2KM.
I tried to communicate that 3KM was, in fact, a little expensive for these small beers which resulted in Galentino suggesting we'd buy beer and drink that at home. Again, I had to pay, them being without cash. If I could also buy something to eat.
At the night store, Galentino didn't go in. "You know, three is too much."
I was starting to get annoyed, even pissed. Galentino's efforts to stay on friendly terms, "Friends, friends, I help you, you help me" was starting to get too much and I made it clear that "Friends, friends" didn't mean that one 'friend' was supposed to financially take care of the other 'friend'. Halfway through my reply, Galentino cast down his eyes in what I assumed was a bout of shame.
But only a little while later, he was back on track again, asking if I could spare him some clothes. I had brought a big fleece sweater with me which I had not planned on taking home with me. Back at the attack, I sighed and gave him the fleece.

Related:  Thinking it over

Later, reflecting, I realised that these two guys, about my age, were, if anything, saddening. When we went for a beer, I could almost smell their glee, their happiness; "We go into town, find some women to fuck…" on my budget.
According to Galentino, the unemployment rate in Bosnia is 70% and only doctors and politicians make enough money to get around. During Tito's reign, all was well, but since, it had gotten worse. Much worse, by the looks of it.
I asked what was needed to get the country back on track. "Impossible. It will never improve. This is a land with no future. Here, nothing is good." With people having this opinion, it will indeed be near impossible.

Galentino wanted to return to Italy, making my departure the next day very bitter. After spending a day in Travnik, I left for Dubrovnik, from where it would take me half a day to get to Italy. That night, he would sit in his small room and watch TV on an old set and sleep a restless sleep wearing all his clothes underneath a torn sleeping bag and probably dream of his wife and kid in Italy.