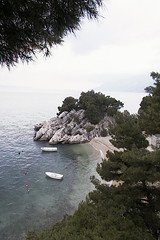 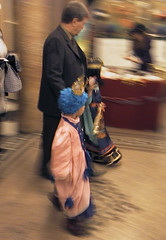 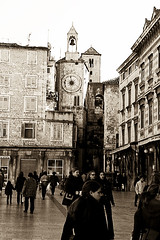 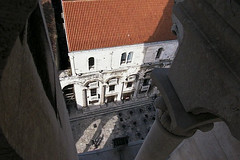 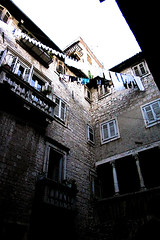 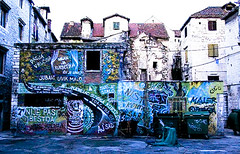 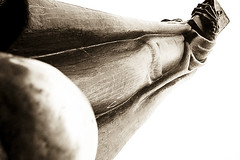 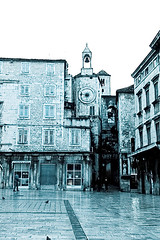 Before I got off the bus in Split, an old sailor almost dragged me out of the vehicle, giving me no option but to stay at his house that night. He and his wife lived in a big house built against the city walls, renting out the spare rooms.

Split is the biggest town in Croatia after Zagreb. The old town was built around a natural harbour, at the bottom of some hills and shielded by the many island in the bay in front of the city. Many boats ferry between the islands, other locations in Croatia, but also go to Italy, Albania and Greece. The industrial harbour is located up the coast, out of sight from the old town.
The palace, basically the old town, is an area of about 200×200 meters, built by the emperor Diocletian, between 295 and 305 AD. Most of what he had built, still stands, as pompous, huge and fantastic as ever.

When walking to the sailor's apartment along the quay, we passed a modern shore-side cafe. Now, at around 6am, it was packed with youngsters, after partying, all smartly dressed but clearly tired. Shortly after dropping off my luggage, I went for breakfast at this cafe, where the crowd hadn't thinned yet, although several people had now fallen asleep or had their heads nodding. Slowly, the place was emptying, people were preparing for the next night on the town.

Later, I walked up the bell tower of the old palace, its entrance being guarded by a black granite sphinx, originating in Egypt in the 15th century BC. The tower, smack in the middle of the palace, allows for a fantastic view of the old town and its surroundings. From the tower, I was able to see the shining Adriatic, the Dinaric alps in the back, salesman in the markets at my feet, playing children, musicians, tourists, everything.
Split is very enjoyable and also very European. Outside of the old town, you can find architecture that would easily fit in Hungary, Austria or Italy. Later that year, when the countries were announced that would be part of the first wave of EU expansion, Croatia hadn't made it. This surprised me. Zagreb, Split and Pula all seemed to me to burst with economic activity.

At night, I visited the National Theatre. Hoping for a ballet or a classical concert, they were performing a comedy for the upcoming carnival. The audience loved it. An older couple next to me couldn't stop grinning, swaying to the music of the many songs that were played that night.
After the standing ovation, I went out in search for a jazzcafe and found one in the old town. Finding some chatty Australians, we were interrupted by an English mumbling Croat. He claimed he had just gotten out of jail, after 8 years, for murder. He resembled Goran Ivanisevic. His wife and child were living in Capri, Italy. The man was drunk and I made sure to leave quickly, after pointing out to him the interesting brickwork of the cafe, to keep him busy while I was looking for the exit.

To finish off Split, I climbed Marjan on my next day in town. No local babe, but a hill, covered in thick woods, sporting an old chapel and a small zoo.

At night, trying to fall asleep, two young sailors were fighting below my window over a bottle of cognac. Local cognac is good, so they were excused. Still, they couldn't decide who was supposed to start and, no doubt, finish the bottle.
I looked out of the window and made it clear they had to make a decision. They both looked up, quiet, swaying from left to right due to the previous bottles they'd already consumed. "Bog!", 'greetings', they both said in unison and walked away, calling each others names as they disappeared in the distance.

Just outside of Split, there's a tiny village, Bela, with exquisite white beaches. It now being Sunday morning in winter didn't really help, though. The place was empty, the sky dark, after weeks of sunshine, and it soon began to rain.
The village isn't big, but spaced out. Finding a path down to the beach from the main road is therefore difficult and it took me hours of going down and up before I finally went all the way. Indeed, the beaches are sandy and white, but I'm sure summer is a better time to visit.